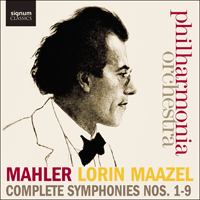 The complete Mahler Symphonies cycle from the Philharmonia Orchestra and Lorin Maazel—now available as a single album.

A century after his death, Mahler’s music resonates more powerfully than ever. Its unique mix of passionate intensity and terrifying self-doubt seems to speak directly to our age. One moment visionary, the next despairing, this is music that sweeps us up in its powerful current and draws us along in its drama. We feel its moments of ecstatic rapture and catastrophic loss as if they were our own. This is not music for detached contemplation: it matters to us, urgently and directly. Its musical language may be romantic, but what makes Mahler’s music so distinctively modern is its unflinching honesty—its embrace of the contradictions of life and of art. Few composers wrote music of such searing lyrical intensity, nor music that is often ironic to the point of parody. But it took a long time for this unique tone to be understood; in his own time, critics heard Mahler’s ability to see the world from several perspectives as a sign of insincerity. Today, we tend to read it as quite the opposite.

Mahler’s earlier symphonies frequently draw on the world of his Wunderhorn songs—settings of simple folk poems about birds and animals, saints and sinners, soldiers and their lovers. But this apparently naive, even childlike tone is found alongside vast musical canvasses that depict the end of the world. In quieter, more intimate movements, Mahler seems to speak intimately and directly to the listener, but the big outer movements are addressed to the entire world. At its most sentimental, Mahler’s music echoes the fairytales of children’s picture books, yet in the next moment it marches with gritted teeth and unleashes terrifying violence.

All this makes for great symphonic dramas, often lasting more than an hour, which imply a vivid sense of storytelling without ever being confined to a specific programme (as a young man, Mahler adopted the idea of programmes from the tone poems of Richard Strauss, but soon abandoned them). This is a composer who insisted that the symphony should ‘include the whole world’—hence its bewildering mix of different characters, and the sense that, for him, it worked rather like the great novels of the 19th century, such as those by Dostoyevsky or Balzac.

We should remember that Mahler was a man of the theatre who, for the 30 years of his professional life, spent most of his time and energy conducting in the opera house. He knew how to create an effect, to stage a scene and to pace a drama. But, like anyone who has worked in the theatre, he had an acute sense that all art is ultimately artifice and make-believe. His favourite writers were those whose works underline their own fictionality which is why, after the dust of the drama has settled, there is a quality of Mahler’s music that recalls the enchanted forest of Shakespeare’s A Midsummer Night’s Dream.

Perhaps it is this many-sided character to the music that feeds our fascination with Mahler himself. Of course, this was fuelled by the composer. Mahler subscribed fully to the Romantic idea that art is made from the life of the artist and, in comments to friends, letters, and annotations on his scores, he encouraged listening to his music as a kind of autobiography, as Berlioz had before him.

But like all great art, Mahler’s music far exceeds the life that made it, just as it far exceeds his own age. His symphonies look back to those of Beethoven and Schubert, but at the same time forwards to the music of Shostakovich and Britten. In his later works he was increasingly drawn to the music of Bach, at the same time that his own music was revered by the young Schoenberg and his pupils. This is music that crosses historical boundaries—as contemporary and vital now as it was a hundred years ago.