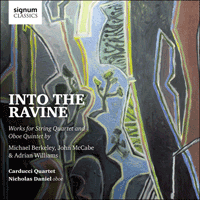 This first release on Signum from one of the UK’s most dynamic string quartets, the Carducci Quartet demonstrate their passion and commitment to bringing contemporary repertoire to a wider audience.

On this recording they are joined by oboist Nicholas Daniel for three new works, all written specially for them and all premiered at the Presteigne Festival: Michael Berkeley’s Oboe Quintet ‘Into the Ravine’, John McCabe’s String Quartet No 7 ‘Summer Eves’, and Adrian Williams’ String Quartet No 4.

'The dynamic Carducci Quartet present premiers of a selection of contemporary music. Michael Berkeley's Oboe Quintet Into the Ravine, features brilliant playing by oboist Nicholas Daniel. The album is rounded off with John McCabe's String Quartet No 7 and Adrian Williams' String Quartet No 4. Compelling playing' (The Northern Echo)

In recent years the Carducci Quartet has built a close relationship with world-class oboist Nicholas Daniel resulting in this new commission from Michael Berkeley for an oboe quintet. It is a work very much influenced by paintings and in particular the works of John Craxton and Mark Rothko and, to quote Michael Berkeley: ‘the way in which paint can vibrate as colours collide.’ The subtitle ‘Into the ravine’ was inspired by a painting by John Craxton which was given to Michael’s father Lennox in 1962, in return for a new oboe sonatina for Janet Craxton (who was also Nicholas Daniel’s teacher). The Quintet, ‘Into the ravine’, was co-commissioned by the 2012 Presteigne Festival and, as an In Memoriam to John Craxton, by Richard Riley. This part of the commission recapitulated the Lennox arrangement when Michael was presented with a portrait that John had drawn of him in 1975.

This enigmatic and deeply personal work, often quietly elegiac, becomes hauntingly intense as it progresses. It opens with the oboe intoning three notes around which all the music oscillates. At pivotal moments in the music this lachrymose motif imposes itself though in varied permutations. In the final bars the oboe has a seagull-like cry until, as though a switch is pulled, its life force is suddenly cut off.

The Carducci Quartet had long been admirers of John McCabe’s work and were delighted when he wrote his String Quartet No 7 for them. The work uses classical structures and captures a Haydn-esque delight in writing for the form. Its five movements (with two scherzos) vary from genial and lyrical to wild and passionate.

Some years ago I noted down the opening theme of what I anticipated would be a relatively Classical string quartet—‘Classical’ in the sense of the forms adopted, plus perhaps a predominantly lyrical tone of voice. The commission for this work, from the Presteigne Festival for their 30th anniversary in 2012, gave me the opportunity of putting into practice this long-held idea. It is dedicated to the Festival and to the Carducci Quartet, whose career, as much-admired friends and colleagues, I have greatly enjoyed.

The only break with ‘classical’ tradition is that there are five movements instead of four, with two Scherzi as the second and third, though both these are very short and contrasting. I found myself listening to Haydn’s string quartets a lot before and during the composition of this work, and I hope the spirit of his delight in writing for this medium is echoed in my own music. The opening movement is in sonata form, unusually for me, and lyricism is, I hope, the basis of it, though there is a good deal of activity at times. The Scherzo, light and marked by frequently-changing rhythms, is followed by an equally short but ferocious perpetuum mobile, marked Wild und rasch (one of my favourite German tempo markings).

The fourth movement is an intense Adagio, in which a single phrase uttered strongly in unison is gradually transformed into gentle diatonic chords before the close, intermingled with cadenzas for cello, for viola, and for the two violins together. The finale (a Rondo) resumes the classical tone of the first movement, but apart from one dance-like episode it builds up a fair head of steam towards a final Presto, which however ascends, slows and quietens, towards a gentle summer sky at dusk. (John McCabe)

Adrian Williams’ String Quartet No 4, premiered to acclaim at Presteigne in 2009 exhibits a deeply felt emotional core and reflects the atmosphere and wide open spaces of the composer’s Welsh Borderland surroundings with a renewed sense of wonder and mystery. Highlighted as ‘the outstanding contribution’ to the 2009 Festival in the Guardian, the Carducci Quartet is thrilled to record this work.

This Quartet follows eighteen years after its predecessor, and to some extent has similar roots, a dark explosive period in life followed by a more positive one. Much of my music is influenced by personal events in life. I find that whilst it’s hard to write at all during periods of extreme difficulty, once that eases the music that appears contains much pent up emotional energy. So it is with this quartet.

The cello begins the first movement with a long climbing angular melodic line, joined one by one by the other players leading to an agonising raw descent in octaves. This initial music sets the underlying tone for the movement, although the whole opening section is a sequence of contrasts including a serene climbing melody and deathly quiet and still moments. The vivace begins abruptly, the players once more in octaves. The music of these two parts interact and offset each other, and a second moment of serenity precedes the final tearing and ferocious bars.

The slow movement is a total contrast, seemingly dark at first, but as the principal themes revolve the music is often very lyrical and even fleetingly reminiscent of Beethoven, and at times the themes seem to fight the underlying harmony in moments which could be recalling past woes. Finally the movement is brought to a close as it draws inwards to a simple close major chord.

There was some debate with myself as to whether a scherzo should follow, leading to an affirmative finale, but in the end I discovered that the ideas already existing for a finale only needed a slower introduction. I knew I wanted to return to music of both preceding movements, and so the idea became to ease the allegro molto feeling without changing the pulse (which I do more elaborately in my Second Quartet), and this is how the harmonic feel of the slow movement returns. The allegro molto springs back to life, but soon breaks down and claws its way con forza towards one note, heralding the agitated music from the first movement. In the end, there is a huge broadening as the opening climbing cello line is heard in reverse, the final notes anchoring it to a triumphant coda. (Adrian Willaims)