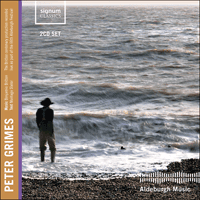 Britten’s powerful and masterful evocation of the North Sea in all its moods has to audiences all over the world become inextricably linked with the Aldeburgh that was home to George Crabbe (author of the ‘The Borough’ from which the story originates) in the eighteenth century and Britten in the twentieth.

Steuart Bedford leads a vast and accomplished ensemble on this new live recording, created shortly before the group’s unique staging of the work on the beach at Aldeburgh as part of the town’s world-renowned festival.

‘An ordinary weak person …’ The reception of Peter Grimes at its first performance in 1945 was almost entirely positive; but a common theme in writing about the opera was concern about the ambiguous nature of Grimes himself. And it was not only the early critics and commentators who were disconcerted by the central character. Both Britten and Pears (the latter made the first drafts of the scenario in 1942) struggled to make sense of a protagonist who, in Crabbe’s The Borough, the opera’s primary source, has no redeeming qualities: in the poet’s own words ‘the mind here exhibited is one untouched by pity, unstung by remorse and uncorrected by shame’.

It is well known that the starting point for the opera was the copy of Crabbe which Pears bought in California in late 1941. The scenario began to take shape before and during his and Britten’s return by sea to England in April 1942, so that Pears was able to say in a later interview, ‘by the time we came back to London, the whole story of Peter Grimes as set in the opera was fully shaped…it simply remained to call in a librettist to write the words’. But it was a little more complicated than that—as late as June 1942 Britten was still thinking of Grimes as a baritone; and the transformation of Grimes from villain to victim was a slow process.

Crucial to the evolving scenario was the gradual reworking of Act II and the emergence of the Borough’s role in the apprentice’s death, which had initially resulted entirely from Grimes’s cruelty. The early drafts of the scenario could have gone in many directions, as different possibilities and different characters came and went. A court scene at the beginning of Act III and a final lament for Ellen were both envisaged at an early stage; Mrs Boles, an extra Swallow, and a Mr & Mrs Sanders disappeared from the cast before their characters had been fully drawn.

The recruitment of Montagu Slater, a committed left-wing writer who had worked with Britten in the 1930s, marked the beginning of the libretto as we know it. Slater, like W.H. Auden, had been a part of the GPO Film Unit, where Britten learned much of his trade. The failure in New York of Paul Bunyan, for which Auden had been the librettist, meant that a further operatic collaboration between the two men did not come into the picture—the experience led to their eventual estrangement. While he was still in the USA Britten had approached Christopher Isherwood, another member of that circle, but Isherwood felt unable to take on Grimes.

Work on the libretto, which also involved the opera’s stage director, Eric Crozier, occupied the whole of 1943. Although the music must surely have been taking shape in his mind, Britten did not begin composing until January 1944, and inevitably this involved a process of continuing change to the libretto. Sometimes Britten composed to words he felt were unsuitable, so that the text had to be subsequently changed to fit the music. Ellen’s aria at the beginning of Act II, ‘Glitter of waves and glitter of sunlight / Bid us rejoice and lift our hearts on high’ read, even as late as the manuscript full score, ‘The sun in his own morning and upward climb makes a world warm’, the somewhat clumsy words stretched awkwardly to fit the smooth melodic line. (The commentator Philip Brett aptly calls the original version a ‘shotgun wedding—or, more precisely, temporary cohabitation’.)

In other places Britten asked for changes before setting the words: who would recognize ‘Beer may be spiced as wine by clove, / By like or dislike, hate or love’ as ‘We live and let live and look, / We keep our hands to ourselves’? In similarly alcoholic vein ‘Old Joe has gone fishing’ first made its appearance as ‘As I drank the home-brewed ale’.

Major reworking took place, too, where there are no words, notably in the ‘Storm’ Interlude. Its apparent fluidity and inevitability cover up an unusual amount of indecision on Britten’s part, compounded by Crozier’s request at a late stage for an extra minute and a half of music to allow enough time for the scene change. The fourth Interlude, the Passacaglia between Scenes 1 and 2 of Act II, caused musical problems as well, beginning life as a fugue before finding its definitive form.

The many changes did not make for an entirely comfortable relationship between composer and librettist—not least because Slater began to feel that he was dealing with a consortium, Britten and Pears’s own input being added to by Crozier, and later by Ronald Duncan, who was to be the librettist of Britten’s next opera, The Rape of Lucretia. Slater eventually published his own version of the libretto—not as a hostile act, although Britten rather took it as such, but because he felt that the opera had moved too far away from the socio-political aspects that were dear to him. The differences in emphasis and tone were significant, although not radically so.

But Britten and Pears’s own view of the work, too, changed over time. Writing in 1945, the composer said, ‘I wanted to express my awareness of the perpetual struggle of men and women whose livelihood depends on the sea’; a rather misleading approach, put much more eloquently several years later: ‘[it is a] subject very close to my heart—the struggle of the individual against the masses. The more vicious the society, the more vicious the individual’. In 1964 he was even more specific: ‘the individual against the crowd, with ironic overtones for our own situation. As conscientious objectors we were out of it…[Grimes became] a tortuous idealist…rather than the villain he was in Crabbe’.

Philip Brett was not the first to suggest that this should more accurately have read ‘as conscientious objectors and as homosexuals’, although he rejected the unthinking approach of treating the opera primarily as if it had a homosexual subtext. Nevertheless Britten and Pears were outsiders in more than one way, and while it would be misguided to read autobiographical elements into the work, their ‘own situation’ cannot be left entirely out of the picture. Perhaps Pears put it best of all: ‘Grimes is not a hero nor is he an operatic villain…he is very much of an ordinary weak person who, being at odds with the society in which he finds himself, tries to overcome it, and in doing so, offends against the conventional code, is classed by society as a criminal, and destroyed as such’.

Prologue: A boy apprenticed to the fisherman Peter Grimes has died at sea. An inquest is being held to determine the cause of death. After hearing Grimes’s testimony, the coroner, Mr Swallow, finds that the boy died in ‘accidental circumstances’. But he warns Grimes not to get another apprentice. Grimes demands a full trial and the right to employ another boy. His pleas are ignored and the court is cleared. Ellen Orford, the local schoolteacher, assures Peter that with her help the future will be better.

Act I
Scene 1: Morning: The Borough goes about its business. Grimes returns from fishing; only Captain Balstrode, a retired naval officer, and Ned Keene, the local apothecary, are willing to help bring in his boat. Keene tells Grimes he has arranged for a new apprentice from the workhouse. The carter, Hobson, at first refuses to fetch the boy, but consents when Ellen offers to look after the child on the journey. As a storm grows, Balstrode tries to dissuade Grimes from a course he fears will result in another tragedy, but Grimes is determined to get rich, marry Ellen and thus silence the Borough gossips.

Scene 2: The Boar: Late that night, the storm has reached gale force. To the annoyance of Auntie, the landlady, Mrs Sedley arrives to wait for Ned Keene. He has promised to meet her there with a new supply of laudanum. Balstrode insults Auntie’s two ‘nieces’ while a drunken Bob Boles, the Methodist preacher, tries to molest them. At the height of the storm, Ned Keene enters with news that the cliff by Grimes’s hut has been washed away. He is followed by Grimes himself. It is as if the eye of the storm had entered the room. When Ellen and the new apprentice arrive, soaked and exhausted from their journey, before the boy can rest, Grimes insists on taking him straight home. He drags him off into the night.

Act II
Scene 1: Sunday morning: Ellen sits down at the beach with John, the new apprentice, while the church service begins. She encourages the boy to talk about himself, but he says nothing. Only then does she notice the bruising on his neck and immediately fears the worst. Grimes comes in to take the boy off fishing. Ellen pleads for the boy’s right to a day of rest. When Peter refuses, she tells him that their attempt to make a new start has failed. Peter, in a frenzy, hits out at her and rushes off with the boy. This scene has been witnessed, and when the congregation comes out of church there is a call for action against Grimes. The men set out for his hut. Auntie, Ellen and the ‘nieces’ are left alone to reflect on the hopelessness of loving men.

Scene 2: Grimes’s hut: Grimes orders the boy to get ready for fishing. Haunted by the death of the last apprentice, he feels his dream of marrying Ellen slipping away. When he hears the men from the Borough approaching, he immediately assumes the boy has betrayed him. As he is hurrying the boy down the cliff to the sea, the Borough knocks at the door. He panics. The boy screams as he slips and falls. Grimes climbs down after him. The men enter to find the hut deserted.

Act III
Scene 1: Outside the Moot Hall, a few days later: In the Moot Hall a dance is in full swing. Outside, Auntie’s ‘nieces’ manage to escape the attentions of Swallow, who retires defeated into the Boar. Mrs Sedley tells Ned Keene she has conclusive proof that Grimes has murdered his apprentice. Keene leaves her to her midnight ravings. Ellen and Balstrode appear, discussing Grimes’s disappearance. Mrs Sedley overhears that Ellen has found the boy’s sweater down by the shore. Ellen and Balstrode decide to try to find Grimes and help him. When they are gone, Mrs Sedley whips up the community against Grimes and a man-hunt begins.

Scene 2: Some hours later: Grimes is alone, tortured by the distant sound of the hunt, longing for escape and peace. Ellen and Balstrode find him, and Balstrode helps him push his boat out to sea for the last time. Day breaks and the Borough goes about its business. Far out at sea a boat is sinking.