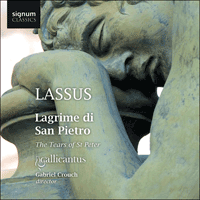 Orlande de Lassus, Europe’s most famous musician during his lifetime, created nothing finer than the Lagrime di San Pietro, a collection of twenty spiritual madrigals and one motet for seven voices. A cycle of intense reflections on the sorrows of St Peter following his denial of Christ, it was assembled shortly before the composer’s death in 1594 and dedicated to Pope Clement VIII. Into this collection Lassus pours every dramatic nuance and piece of harmonic invention he could possibly muster, hurling the listener through the stages of Peter’s rage, remorse and resignation, and concluding with a motet that presents Christ’s response to the world.

Gallicantus (Latin for ‘song of the rooster’) add to their already impressive catalogue of works on Signum.

'Gallicantus's robust and committed account will hearten those who fear for the future of this repertory on disc. The countertenors on the top lines are a vigorous alternative to women's voices' (Gramophone)
'The sound image is compelling on its own terms, with the homogeneity typical of ensembles with countertenors on the top lines. But it’s a flexible interpretation nonetheless, for Gallicantus have grasped that which not all their predecessors have … details are tellingly lingered over, repetitions properly emphasised and the score’s illumination of an inner drama sensitively rendered. The odd glitch of intonation (very rare, in truth) is a negligible price to pay for such an involving experience' (Gramophone)
'Gallicantus sing this cycle of sacred madrigals and its climactic motet with all the gravity and respect it requires as the major milestone in the development of art music that it was. Live, on a rainy Sunday afternoon at th e Wigmore Hal, it was one of the most profound musical experiences of my year; on disc it comes almost that close'' (Gramophone)
'The ensemble Gallicantus is an all-male group known for skilful interpretations of music from the late Renaissance. Made up of just seven singers—including their director, Gabriel Crouch—they have already built a formidable reputation for bringing the Renaissance back to life through dynamic performance and intense interpretation … the music is intensely poignant and reflective. As an expression of the depths of a man’s soul in the face of death, reaching and maintaining the right emotional tone from the start can be a difficult task indeed … each single voice is wonderfully strong, but never overwhelms. Even at the extreme ends of the musical range—particularly that of the countertenors, which is often soaring high above the rest of the texture, but never outside it—no single voice dominates. This is secured despite the awesome strength of each voice. Each is always subservient to the ensemble, the music, and the bigger picture. The resulting balance is sublime. This is all helped along by the very detailed and well-researched programme notes, which greatly enhanced my experience' (MusicWeb International)» More

In the early summer of 1594, at the court of the Duke of Bavaria in Munich, Orlande de Lassus dedicated his just-completed Lagrime di San Pietro, the ‘Tears of St Peter’, to the first apostle’s living successor, Pope Clement VIII. ‘I send and dedicate to Your Holiness with the greatest reverence’, he wrote, ‘these tears of St Peter, which were composed some time ago by Luigi Tansillo and have been clothed in harmony by me for my personal devotion in my burdensome old age.’

The burden which Lassus refers to had weighed heavily on the composer, now in the last month of his long life, for at least seven years, and we might reasonably wonder if he sensed that final relief was at hand. From 1587 the flow of compositions became less constant, and at the Duke’s insistence, he had relinquished his daily duties in the court Chapel. His wife Regina wrote of his decline, recalling frequent bouts of ‘melancholy’, a condition which could bear any number of physical or emotional manifestations, and a preoccupation with his own death. (He was attended to frequently by the court physician Dr Mermann, and such was his gratitude for the treatment he received that he took the unusual step of dedicating an entire volume of madrigals to him.)

It would be understandable for Lassus to feel penitent as his health declined in those final years. His sense of mischief and taste for scandalous subject matter, which revealed itself in his Italian, German and most of all his French secular music, had continued to flourish through his sixth decade and there was no sign of censorship or discouragement from his employer. His correspondence with the young Duke Wilhelm prior to his accession in 1579 reveals a man still possessed of playful, youthful humour, enamoured with puns and wordplay, and he was about 50 years old when he produced a parody Mass based, of all things, upon a chanson which celebrates the charms of teenage girls—the Missa entre vous filles of 1581. No doubt there was plenty to atone for in the course of what seems to have been an adventurous life. His later years certainly contained a great deal of music which was conventionally tailored for the Catholic Rite (enthusiastically embraced in Counter-Reformation Munich), but this was familiar territory through most of his career. Not so with the Lagrime di San Pietro, an exceptional cycle of madrigali spirituali (sacred madrigals) whose unclothed confessional tone makes that reference to ‘personal devotion’ in the dedication to Pope Clement feel wholly sincere.

The architecture of the Lagrime reveals a series of devotional musical gestures which, woven together, lend the whole work a spiritual symmetry worthy of Bach himself. At the heart of it all lies the number seven: There are seven voices in the score, the work employs seven of the eight church modes, many of the movements are divisible into seven sections, and the total number of movements is 21—or seven times the number of the Trinity. Of course the number has a profound significance for one engaged in the act of penitence—there are seven deadly sins, seven penitential psalms, and seven sorrows of the Virgin Mary. Seven is also the number of times Peter suggests to Christ (Matthew:18) that his sinful brothers be forgiven, only to be rebuked by the answer that even ‘seventy times seven’ acts of mercy would not suffice.

No doubt then, that the elderly Lassus would have identified with the anguish of Peter; but it seems likely too that his selection of texts by Luigi Tansillo was carefully considered. One of the great inheritors of the Petrarchan school, Tansillo wrote the 42 stanzas of his Lagrime towards the end of a career which had seen notoriety and Papal censorship of his more licentious work. The text of the Lagrime was itself an act of penitence, and it won the explicit approval of the Pope—the same approval that Lassus sought in setting the first 20 stanzas of the work three decades later. Read consecutively, the stanzas present the stages of remorse experienced by Peter after his threefold denial of Christ. In the first few movements the focus lingers on the eyes of Christ, which in Tansillo’s hand become weapons to pierce Peter’s soul, later transformed to mirrors in which Peter witnesses his great crime with unbearable clarity. In the seventh and eighth madrigals Peter imagines the voice of Christ chastising him for his betrayal. The next twelve madrigals form a sequence of self-recriminations which begin with depictions of the tears of Peter (madrigals 9 to 13) and conclude with his desire to receive the punishment of death (madrigals 14 to 20).

By deliberate design, the 21st and final movement lies outside the harmonic plan of the cycle: The first 20 madrigals chart a tonal arc through modes I to VII, but the final motet Vide Homo, quae pro te patior is based upon the tonus peregrinus (‘wandering tone’), which perhaps reflects a shift in perspective from the worldly to the celestial. This release does not bring consolation—in fact, we witness the crucified Christ bitterly rebuking his audience, demanding witness to his suffering which, though painful, does not compare to the agony of man’s ingratitude for his sacrifice. Appropriately for the voice of Christ, this 13th-century text by Philippe de Grève is delivered in Latin, not Italian—though the anguish depicted in Lassus’ music is every bit as searing as before.

Lassus treasures every syllable of Tansillo’s poetry and goes to great lengths to see that we hear the lines as he does. The musical phrases echo the natural rhythms of speech, with no room for florid embellishment or melisma. Lines of text are repeated for emphasis where necessary, and are set antiphonally (between alternating smaller groups of singers) where some sense of dialogue is appropriate. Each madrigal has its own emotional arc, and the points of climax are set with both text and music in mind. Every phrase has its own colour, and though gloom and anguish surely dominate, there is the occasional moment of reprieve or a glimpse of the humour of the old days—witness the earthy song of the cockerel in the 11th madrigal, or the limping of the lame in the 18th. As a model for the fruitful union of music and poetry the Lagrime di San Pietro sits at the pinnacle of the sacred madrigal cycles of the late 16th century, and is one of the great musical achievements ‘comparable in its artistry, its dimensions, its asceticism,’ wrote Alfred Einstein in 1949, ‘to the Musical Offering and the Art of Fugue.’