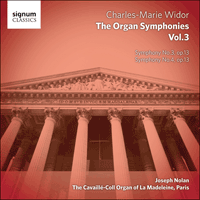 The third volume in our series of Charles-Marie Widor’s Organ Symphonies, performed by Joseph Nolan on the magnificent Cavaillé-Coll organ of La Madeleine, Paris.

'This is proving to be a highly impressive series, and one which you can return to with confidence, knowing that the performances will come up fresh on each hearing … there is a real sense of a live performance rather than the cut and paste of many earlier recordings … the dynamic changes within the church are impressive. Listen to the over-powering impact of the Marcia in the third symphony, followed by the reflective Adagio. Nothing sentimental or insipid in the quieter registration, but a real sensitivity towards the quieter voicing. Equally pleasing are the gentle Andante cantabile of the fourth symphony before the skittering of the Scherzo and the blazing finale. If you have not got the rest of the series—do so!' (Lark Reviews)» More

The deaths of Pierné, Ravel, Roussel, Vierne and Widor in 1937 marked the annus horribilis of 20th-century French music. Widor—Lyon-born, member of the Académie des beaux-arts of the Institut de France, Grand-officier de la Légion d’honneur, for over 60 years ‘king’ of the Cavaillé-Coll in Saint-Sulpice, successor to Franck and Dubois at the Paris Conservatoire—was then into his 94th year. ‘Nestor of French music […] master organist, composer of operas, symphonies, and organ works, teacher of three generations of French composers’ (Nicolas Slonimsky, Music since 1900). In his nine decades he lived through a world from Second Empire to Third Republic, Commune to Great War, from Rossini, Berlioz and Liszt, Brahms, Bruckner and Busoni, to Debussy, Stravinsky and Varèse, Mahler, Massenet and Messiaen. His salon was that of a cosmopolitan man of culture and refinement. The court of the city sat his table. At the fashionable Restaurant Foyot on the Left Bank he knew ‘everyone’, his student Marcel Dupré remembered: ‘senators, writers, painters, the entire Parisian artistic élite’. His philosophy was simple. ‘All that relates to the intellectual domain is intimately bound together by obvious connections: music has certain rapport with painting, sculpture, architecture, design, literature, and even with the exact sciences’. ‘The brain of a composer is a sort of sponge that absorbs every day the multiple impressions of life […] The idea which seems to us newest always proceeds from another idea. “One is always the son of someone” [Beaumarchais’s Figaro]’. ‘To live well and long, it is enough to work hard, to eat and drink well, and not to turn your head away from a pretty face.’ While a bust of Bach watched over him, countesses of endowment shared his bench and turned pages.

‘The Isambard Kingdom Brunel of late 19th-century music, the organ world’s Chief Engineer’ (Andrew Mellor), Aristide Cavaillé-Coll (1811-99) provided composers with an epic medium. Father of the French Romantic tracker-action organ, his monumental edifices of metal, wood and ivory commanded the spaces of Notre Dame (where Sergent and Vierne were incumbents during Widor’s lifetime), La Madeleine (Saint-Saëns, Dubois, Fauré), Saint-Clotilde (Franck, Pierné, Tournemire), La Trinité (Guilmant, Messiaen), Saint-Denis (his first instrument, dedicated in 1841), and the old Palais du Trocadéro. Their magnificent mechanisms and vaulting façades crowned the great abbeys, basilicas and cathedrals from Lyon and Bayeux to Orleans and Rouen. In 1862 his ‘magnum opus’—comprising more than 100 stops (including two 32-foot ranks), nearly 7,000 pipes, 19 pédales de combinaison, 20 wind-chests, seven pneumatic Barker levers (ante-resistance devices equalising touch and lightening action ‘regardless of the physical location of the respective pipework’), eight double-rise reservoirs, and five manuals—was installed in Saint-Sulpice, inaugurated by Saint-Saëns. This was the lead-grey ‘monster’ instrument, with its many voices, colours and harmonic overtones, its gradation and immensity of volume, which was to so famously inspire Widor. ‘You know when you’ve heard a Cavaillé-Coll organ,’ Mellor says, ‘just as you know when you’ve eaten a properly dressed salade niçoise. The first thing to hit you is the breadth of the sound: a gentle nave-shaking vibration that feels like a tidal wind. Pressured wind powers all organs, but Cavaillé-Coll made it part of his sound; a strange, breathing humanity shot through the entire instrument’s register. Then there’s the stops themselves—distinctive strings that have an alluring mysticism; forceful reeds that seem to protest as if wrongly imprisoned within the woodwork; the harnessing of them all with a seamless general crescendo […] that builds rapidly to an overwhelmingly wide full organ sound’ (Gramophone, 2 June 2011).

Presaged to an extent by the ‘moral revolution’ of Franck’s cyclic Grande pièce symphonique completed in 1863, the eight ‘Symphonies Op 13 et 42/pour orgue par/Charles Marie Widor/Organiste du Grande Orgue de St Sulpice à Paris’ consolidated the genre between 1871 and 1887, two further ones appearing in 1894 and 1899. Public affection for the occasional movement has never waned—the ‘wedding’ Toccata of the Fifth (recorded by the composer at Saint-Sulpice in April 1932 when he was in his late 80s: a fluid if measured reading, distinctive for its harmonic pointing: ‘you must give the organ time to breathe and speak,’ he was fond of saying), the Marche pontificale from the First—but for a while appetite for the complete beasts did. Yet however much critics faulted and faded them, especially following the Second World War, most had to admit that there was in fact an inescapable strength to the music and the tradition that spawned it. In Festival of Britain London, Sackville-West and Shawe-Taylor regretted the ‘endemic disease’ of organist-composers running through them (pedal-points)—but agreed they were ‘impressive pieces of architecture [with detail] often beautiful in itself’ (The Record Guide). Martin Cooper, wearying that organ music per se was interesting merely to organists, called for the prosecution Saint-Saëns’s view that the breed was capable only of ‘harmonious noise rather than precise music’—while conceding that the ‘skilled improvisation and great brilliance of effect’ of the French school, was ‘universally recognised even in those circles where they are not valued highly’ (French Music). Today, their naphthalene-odoured associations a distant memory, Widor’s symphonies need no special pleading.

Dedicated to Cavaillé-Coll (1879 edition), the four Symphonies, Op 13, engraved in Leipzig, were published in Paris in early 1872. Prefacing the 1887 printing, Widor justified his intentions and answered his critics. ‘The modern organ,’ he wrote, ‘is essentially symphonic. The new instrument requires a new language, an ideal other than scholastic polyphony. It is no longer the Bach of the Fugue whom we invoke, but the heart-rending melodist, the pre-eminently expressive master of the Prelude, the Magnificat, the B minor Mass, the Cantatas, and the St Matthew Passion […] henceforth [one] will have to exercise the same care with the combination of timbres in an organ composition as in an orchestral work’.

Planned initially in six movements (a four-voice Fugue, Moderato assai, placed fifth, was omitted subsequently, reappearing around 1910 as one of the Deux pièces pour grand orgue, together with the discarded original fourth movement of the Second Symphony), the Third opens with a 6/8 Prélude, dynamically contained. The cut of this—ties, suggestions of fluid cross-metre, chromatic progression, harmonic pacing, modulations—establishes a distinctively active quality, Moderato tempo and pedal-pointing notwithstanding. The B minor Minuetto, with a trio in G major and a routine tierce de picardie coda, breaks no formal boundaries but is interesting in its ‘orchestration’ and for how Widor uses tessitura, rhythm and simple variation techniques to re-angle appearances of the principal style ancient idea (from as early as bar 5). The Marcia in F sharp major unleashes hewn majesty but isn’t all about unrestrained volume. François Sabatier (1991) calls it a ‘rondo à refrain varié’—confirming a design that’s essentially ABACA, with the central reprise in (classically ‘wrong key’) A major (tonally anticipating the fourth movement). The first episode is modulatory; the second, more stabilised, moves from B flat to the home tonic. Both provide quieter, voice-led, counterfoils to the refrain—an imposing idea welding a distinctive anacrusis/downbeat dotted-rhythm with a pedal part democratically melodic and harmonic. Anchored by a slow-moving, pedal-pointed bass line, the 6/8 Adagio, a two-part canon-at-the-octave in A major (soprano-led at one bar’s distance), looks to the French pastorale tradition, vaguely resonant, albeit not modally, of a Mendelssohnian gondola song. Emphasing the strong compound/triple time/triplet character of the work as a whole, the ‘orchestrally’ exuberant, swirlingly over-toned, 12/8 Finale is a sonata allegro of flowing movement and fluid structure, displaying Widor’s evident delight in dramatising epic, German-descended, musical architecture. Both the principle subjects are urgent in different ways: the first through submediant inflections and short-upbeat/long-downbeat rhythms (which latter feature comes to pervade the music throughout); the second through subdominant minor referencing. The closing moderato/adagio, based on the second subject, draws the curtain down in E major—but with enough side-stepping tension to ensure no easy solace.

Neither sonata rigour nor Beethovenian elementals (cf. Alkan’s 1857 piano Symphony) underwrite the Fourth. Affirming, like its companions, Widor’s early Saint-Sulpice aesthetic, it asserts, rather, the idea of a homo-polyphonic partita-suite, identifiably Baroque in reference (cf. Raff’s piano Suites, 1857–76). Preceding the composer’s full assimilation of Liszt and Wagner (he attended the inaugural Bayreuth Ring in 1876), the harmonic language (unlike some of the key changes) is relatively straightforward, sometimes even plainly simple. That, however, Widor was a natural master of ‘fifth species’ counterpoint, passing note routines, sequence, and fugal procedure is never to be doubted. With practised ease, he weaves shapely lines and malleable textures, crafting his voices and articulation with an orchestrator’s eye. Franck’s view of the organ as an orchestra was one he shared—‘an organ of 30, 40, 50 stops is a [wind] orchestra of 30, 40, 50 musicians’.

The minore first movement is a single-dotted-rhythm ‘French overture’ Toccata with florid interjections characteristic of the type. The second, also in the minor, is a four-part Fugue in 6/8 on a subject related to the gigue from Bach’s Third English Suite. Mendelssohn shadows the third and fourth chapters—a winning ‘song without words’ in A flat major, redolent of that master’s Op 19 No 4, played at Widor’s funeral (absent from the first edition); and (likewise added only in 1887) a nimbly semiquavered Scherzo in C minor (pianissimo staccato) with a common-time trio (in accompanied two-part canonic/imitative counterpoint) which serves also as a coda. The fifth movement, again in A flat, is stylistically a pastorale—on the one hand memorable for its voix humaines emphases and variations of detail (for instance, the harmonic enrichment and added pedal notes of the reprise); on the other striking for the key swings of the central section. The coda, at the end echoing of the close of the third movement, could not be more beautifully placed or proportioned. The maggiore Finale is a sonata-rondo on a 3/4 quasi-’martial’ refrain alla Schumann. Primary and secondary harmonisation contrasts with unexpected tonal event in the reprise following the triplefied D minor middle episode, the modified refrain reinforcing B flat and D flat rather than the tonic of expected convention. When F major is finally reached, it’s thundered home in appropriately ringing glory, full organ ablaze. ‘Grandeur,’ Widor used tell his students, ‘is the organ’s essential characteristic. This is because, of all musical instruments, [it] can sustain sound indefinitely and with the same intensity’.