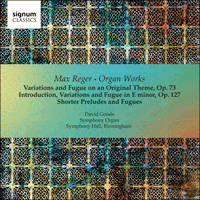 The two major organ works on these albums (his longest for organ) show Max Reger at the height of his powers; not only do they sustain a structural coherence over an impressive span, but they show an almost inexhaustible proliferation of invention. As well as the large-scale Variations and Fugue on an Original Theme and the Introduction Passacaglia and Fugue in E minor, this set of 2 albums includes a collection shorter preludes and fugues—the Five Easy Preludes and Fugues and two transcriptions of preludes and fugues by JS Bach from the Well-Tempered Clavier.

'The main elements of this double CD are opp 73 and 127, both over 30 minutes in length and illustrative of Reger at his most inventive. With Reger's writing bordering on Impressionism here, it is hard to sustain the musical narrative at this length. However, Goode has a natural instinct for this music and one is effortlessly navigated through all the technical challenges presented. By way of contrast the second CD contains the Five Easy Preludes & Fugues and a pair of Reger's Bach transcriptions. I had my doubts as to whether the Symphony Hall Klais organ would prove ideal, but what one loses in atmosphere with the concert hall acoustics, one gains in clarity' (Choir & Organ)

'Even by Max Reger's standards, the works that fill the first of this pair of discs are massive: at 35 and 31 minutes respectively, they are his two most substantial organ works. The Introduction, Variations and Fugue on an Original Theme Op 73, composed in 1903, is couched in the dense, chromatic style typical of Reger's maturity and dominated by the huge central set of variations, which is followed by a relatively modest concluding fugue. In the Introduction, Passacaglia and Fugue in E minor Op 127, from 10 years later, the weight is again the central section, a passacaglia with 26 variations. In this case it is balanced by a hefty double fugue, while the textures have a clarity and, in David Goode's performance on the organ of Symphony Hall, Birmingham, a greater crispness, that really do suggest more transparency in Reger's later style. By contrast, the Five Easy Preludes and Fugues on the second disc seem much more straightforward and lighter in tone; Goode certainly makes them sparkle in a way that belies the composer's dour image' (The Guardian)
'The two major organ works on these discs show Max Reger at the height of his powers. They are performed by David Goode on the organ at Symphony Hall, Birmingham. As well as the large-scale works, such as Variations and Fugue on an Original Theme, the set includes shorter preludes and fugues. Compelling recitals' (The Northern Echo)

The two major works on these albums (his longest for organ) show Max Reger at the height of his powers; not only do they sustain a structural coherence over an impressive span, but they show an almost inexhaustible proliferation of invention.

The Introduction, Variations and Fugue on an Original Theme Op 73, in the unusual key of F sharp minor, was written in 1903 when Reger was living in Munich. Much of it is notable for its tone of melancholy lyricism, employing a chromaticism that is daring, almost impressionistic, whilst remaining thoughtful.

The Introduction itself falls into three sections: a mysterious, yearning succession of phrases, often built on the rising melodic ﬁgure of tonic, major second, perfect fourth (referred to below as ‘ﬁgure A’); a more vigorous, structured section in ﬁve-part counterpoint (with its own short pianissimo interlude); and a brief return to the brooding style of the opening.

The theme is andante, in a spacious 6/8 metre. The third bar reveals the source of the important rising ﬁgure from the Introduction while the semitonal shifts downwards to the 6-4 ﬁrst on C natural and then on B are signiﬁcant moments.

The Variations are as follows:

1. free contrapuntal ornamentation
2. scherzando exchanges
3. a light and chromatic toccata in D minor
4. a free harmonic paraphrase of the theme, moving back to F sharp minor
5. vigorous counterpoint with the theme in the pedals
6. a delicate moto perpetuo
7. a free fantasia built around the inversion of figure A
8. a toccata across three manuals, built around forms of figure A in the top and bottom parts
9. a free chordal toccata
10. a powerful fantasia built on a chromatic version of figure A, building to a formidable climax
11. a transitional variation obviously recalling the theme; mysterious exchanges lead, momentarily, to a cadence in F sharp major
12. an idyllic interlude, with translucent textures, in the Neapolitan G major, with figure A as an ostinato in the left hand
13. inversion of figure A in the pedals returns us abruptly to reality; extravagant bravura writing
14. a delicate return to the theme, now in the major, and an exquisitely lingering cadence

The Fugue is relatively short by Regerian standards, and often light and scherzando in style and texture. Nonethless, by the end it accumulates enough substance to absorb the weight of the preceding material; and the ﬁnal cadence, resolving into a resplendent F sharp major, is majestic.

The Introduction, Passacaglia and Fugue Op 127 is from the last period in Reger’s life when he was increasingly incorporating into his writing a neo-classical aesthetic, namely greater leanness in the counterpoint, more translucent textures, and often greater brevity (although the latter does not apply in this case, it can be clearly seen in the Nine Pieces Op 129 written later that year).

So, after the traditional alternation of densely chromatic chordal writing and bravura ﬂourishes at the opening of the Introduction, we soon hear some limpid ﬁgures in the right hand, lightly accompanied, before the heavier writing returns

The Passacaglia theme which is then announced softly in the pedals uses eleven notes of the chromatic scale (F natural is absent) and is followed by no fewer than 26 variations. They fall into a carefully-modulated scheme consisting of three groups: an early intensiﬁcation of speed and weight, a retreat to a meditative central point, and a second, and more conclusive, intensiﬁcation. A precise account of the progress of the variations will give an indication of the effective control of pace and excitement achieved by Reger.

The double Fugue is amongst Reger’s freest, in particular the ﬁrst section which develops like a fantasia. It begins as an innocuous scherzando with semiquavers, played on the lightest 8.4.2. registers, showcasing Reger’s new style. In due course these become triplets, recalling textures from the Passacaglia, and then demisemiquavers in a challenging trio texture. The opening texture returns, but now steadily accumulates weight and volume until a cadence in D minor is reached. A second theme with a different shape and a more sostenuto style appears, ppp; but, before long, it too is overrun by triplet semiquavers and eventually a ﬂurry of demisemiquavers. There is nothing to be done but to combine the themes (artfully designed, of course, for that very purpose) and to build to a conclusion of truly awesome grandeur, in which it seems as though every possible chord is tried out before E major ﬁnally arrives.

The Five Easy Preludes and Fugues date from 1901, between the great Op 52 Chorale Fantasies and the formidable Symphonic Fantasy and Fugue Op 57; one might speak of them, as of Beethoven’s Bagatelles, as ‘chips from the master’s workbench’.

No 1 in E is one of Reger’s most lyrical inspirations. It begins as a trio, moves through episodes of atmospheric chordal writing before the opening material reappears, deliciously embellished with counterpoint. The Fugue builds steadily from its calm opening; an unusual feature is the appearance of the theme in augmentation for the ﬁrst pedal entry.

The D minor Prelude is a mercurial conception, mingling scherzando moments with those of a more shadowy nature. The Fugue is fast, restless and intensely chromatic, quite belying its description as ‘easy’.

The G major adopts the pastoral associations of that key, with a meandering Andante Prelude which occasionally threatens to reach a powerful climax but invariably veers to gentler reaches. The Fugue is a spacious affair in alla breve time.

The C major Prelude is the most overtly Baroque of the set—it conjures memories of the style brisé of the C major Prelude from Book II of the Well-Tempered Clavier. The Fugue is a very good-natured scherzo in 2/4 time; it is unusual in ending quietly.

The B minor Prelude looks forward to Op 73 in its melancholy tone and short rhetorical exchanges. It is notable for a contrapuntal central episode whose subject curiously recalls Aus tiefer not, inverted. The Fugue is sinuously chromatic throughout; at bar 32 it presents a counter-exposition with the subject inverted, after which both versions jostle for supremacy towards the conclusion.

By way of a postscript, the opportunity has been taken here to include two of Reger’s transcriptions of Bach’s Well-Tempered Clavier, which, apart from anything else, intriguingly suggest (in the detail of their performance instructions) an early twentieth century mode of performance for Bach’s actual organ works.

The G major is a more straightforward realisation. In the Prelude, however, Bach’s arpeggiated textures are ingeniously reworked. In the Fugue Reger contents himself with adding dynamic inﬂections and involving the pedals in some agile writing.

The C sharp minor Prelude emerges as dark and intense as a Turner night landscape. The Fugue builds from hushed meditation to exultant heroism, before subsiding again.

Several things need to be said. Firstly, that it is unusual to find organs of the scope, musical coherence and power that this music, particularly Opp 73 and 127, demands. I am therefore enormously grateful to Paul Keene for the opportunity to record in Symphony Hall, whose organ possesses an impressive combination of structural rigour and Romantic colour.

Secondly, this has been a labour of love, so I am extremely grateful for the support, patience and encouragement of friends, family and followers over the (rather too-many) years in which this volume has lain, in its constituent parts, on the shelf until time and resources could be found to put it together.

Thirdly, for the dedicated work of Jonathan Lane over many years. Finally, to Signum, with its impressive track record, for adopting the project.

The Symphony Organ was inaugurated on Friday 19 October 2001 as part of Symphony Hall’s tenth Birthday celebrations.

It was designed and built by hand using traditional craftsmanship by Johannes Klais Orgelbau, a long-established family ﬁrm from Bonn that has an enviable worldwide reputation.

The organ has over 6,000 pipes, which stretch over 2 and a half miles when laid end to end and weigh more than 30 tonnes. It is nearly 65 feet tall and contains wood from over 20 massive trees. The pipes, ranging from 32 foot to 6 inches in length, are made from a range of woods and metals including oak, ﬁr, and pine plus soft metal alloys from tin, lead, and zinc.