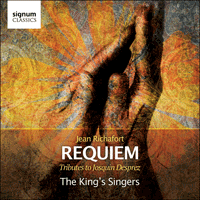 Few composers of any age have enjoyed the widespread admiration and unanimous praise of successive generations as Josquin Des Prez. He is considered the greatest creator and innovator of musical composition during the Renaissance, and for some half a millennium his music has stood the test of time. He is remembered as much for his own works as for his lasting influence on those of his contemporaries and students, something demonstrated in many of the compositions in tribute of 'the master' featured in this programme. The centrepiece is Jean Richafort's Requiem (Missa pro defunctis), a tribute that employs several of Josquin's compositional devices.

The King's Singers once again demonstrate their versatility and trademark precision in this new programme devised by leading early-music scholar and conductor David Skinner.

'Josquin Des Prez, the most influential composer in the Flemish school of the early sixteenth century, died in 1521. Over the following decade, a whole generation of composers, many of them former pupils, wrote memorial works, often quoting material and techniques from Josquin's own music. The King's Singers' disc of those tributes centres on perhaps the most substantial of them: the Requiem in Memoriam Josquin Desprez composed by Jean Richafort (c1480-1550). Richafort, who worked at both the French court and in Bruges, may well have been a Josquin pupil, too, and his requiem, which borrows themes and devices from the older man's chansons, was one of the most successful of its time' (The Guardian)» More

'An unexplored, if slightly morbid Renaissance treasure trove, this CD presents memorials composed by Josquin's colleagues after the Flemish master's death in 1521. The centrepiece is Jean Richaford's Requiem, with flowing counterpoint spiced by rich dissonances. But the most astonishing work is Jacquet de Mantua's Dum vastos, weaving together five Josquin 'hits'' (The Times)

Few composers of any period have enjoyed the widespread admiration and unanimous praise of successive generations as Josquin Des Prez. He is considered to be the greatest creator and innovator of musical composition during the Renaissance, and for some half a millennium his music has stood the test of time. Music printing came about during Josquin’s lifetime, and it is highly significant that Petrucci placed the composer at the opening of each of the first four motet anthologies, dating from 1502 to 1505. It was also in 1502 when Petrucci’s Misse Josquin was published, marking the first collection ever to be devoted to a single composer. Josquin was truly at the pinnacle of his profession, famous throughout Europe, and served as a model of exquisite beauty and compositional prowess for generations to come.

Relatively little is known of Josquin before his death in 1521, and, indeed, most reports date from decades later. They do, however, point to the fact that he must have been a perfectionist. Commenting in 1547, more than two decades after the composer’s death, the Swiss theorist, poet and humanist Heinrich Glarean tells us that Josquin ‘… published his works after much deliberation and with manifold corrections; neither did he release a song to the public unless he had kept it to himself for some years’. The Lutheran humanist, Johannes Manlius reported an anecdote concerning Josquin’s own choir rehearsals: he was said to have walked among the singers during a performance of one of his works, and if something dissatisfied him, the composer would say ‘Be silent; I will change that’. Martin Luther himself greatly admired Josquin, and, after singing the chanson Nymphes, nappés, proclaimed the now-famous quote that ‘Josquin is the master of the notes, which must do as he wishes while other composers must follow what the notes dictate.’

Such was Josquin’s popularity that after his death in 1521 other composers sought to emulate his style; compositions were often found to be reattributed to Josquin as they would then become more respected and marketable. In 1540 the German editor and composer George Forster famously recalled hearing ‘… a certain eminent man saying that, now that Josquin is dead, he is putting out more works than when he was alive!’

This recording, however, does not focus on the works of Josquin the Master, but on those tributes to the Master created after his death by his pupils and colleagues, who, themselves, owed much of their skill and fame to Josquin’s teachings. The centrepiece here is the Missa pro defunctis by the Flemish composer Jean Richafort, who certainly knew Josquin and may also have been taught by him. It was published in 1532 (eleven years after Josquin’s death) and is the most extensive memorial to survive. Two of Josquin’s own compositional devices are employed in the Mass: the ‘Circumdederunt me’ plainsong melody, in canon, as it similarly appears in Josquin’s Nymphes, nappés, as well as the tune and text of ‘C’est douleur non pareille’ from another chanson Faulte d’argente.

Richafort is thought to have been born in Hainaut in around 1480, and was employed at the collegiate church of St Rombout, Mechelen, by 1507. In the following decade he became associated with the French royal court, and enjoyed the patronage of Ann of Brittany, queen to Louis XII, and was later a singer in the chapel of François I. By 1528 he is listed as a basse-contre at Ardenburg near Bruges, and in 1543 he took up the post of zancmeester and Chaplain at St Gilles in Bruges where he seems to have been associated until his death in around 1550. The seven movements of the Missa pro defunctis are all set for six voices, providing a dense, dark texture throughout apart from isolated verse passages. It stands as one of the most substantial settings of the Requiem to survive from the 16th century, and, arguably, was not matched in scale or success until Victoria’s famous setting published in 1605. The cantus firmus ‘Circumdederunt me’ in canon at the fifth is largely present throughout, but the movements are grouped in different modes. The Introit and Kyrie are in F, with a single flat in the signature, while in the Graduale the flat is removed (though still in F), which, along with the Offertory, introduces the melody ‘C’est douleur non pareille’ (it is sorrow without equal). The Sanctus, Agnus Dei and Communion continue with B naturals, but the polyphony starts on A while the cantus firmus remains in F. These changes in modality, within a constant use of the canonic cantus firmus, aptly demonstrates Richafort’s skills as one of the finest composers of the ‘Post-Josquin’ generation, while the proliferation of borrowed material from Josquin and elsewhere makes this work a most fitting tribute to the master composer of early polyphony.

A portrait of Josquin once hung in St Gudule, Brussels (thought to have been lost in the 16th century), and was said to have included an epitaph to the composer entitled O mors inevitabilis. The relatively little-known Hieronymus Vinders, who spent some time in Ghent in 1525-6, set the text within a dense texture of seven voices, two of which paraphrase the Missa pro defunctis introit chant ‘Requiem aeternam’. Other tributes include settings of the poem Musae Jovis by Gerard Avidius of Nijmegen, who was a pupil of Josquin. This was modestly set for four voices by Benedictus Appenzeller (c1480-c1558), while a more extensive gesture for six voices was set by Nicolas Gombert (c1495-c1560), also said to have been a pupil of Josquin. Stephen Rice notes that Gombert rarely used cantus firmi in his compositions and its use here highlights the unmistakable tribute to Josquin. Here the ‘Circumdederunt me’ is set in long sustained notes, within lusciously crafted counterpoint, which again is in reference to Josquin’s canonic use of the same melody in Nymphes, nappés.

Perhaps the most extraordinary tribute, and one that is rarely performed today, is Dum vastos Adriae fluctus by the French composer, and yet another pupil of Josquin, Jacquet of Mantua (or Jacques Colebault, 1483-1559). Jacquet was in later life active in Italy, and enjoyed the patronage of Ercole Cardinal Gonzaga (1505–63), Bishop of Mantua and papal legate to Charles V. The composer was in Mantua intermittently between 1527 and 1559, and there is some circumstantial evidence to suggest that he might have been the ‘Master Jacquet’ who was employed at Magdalen College, Oxford, as Informator choristarum (Instructor of the Choristers, though a position regularly occupied by composers) at various times in the 1530s. Certainly Jacquet’s famous Aspice Domine is one of only two foreign works preserved in the so-called Peterhouse Partbooks, thought to have been compiled from the repertory of Magdalen College as it stood in the early 1540s. Little is known of his later movements, but Jacquet died in Mantua on 2 October 1559.

Dum vastos never made it into the composer’s collected works, published in the 1970s and ‘80s, though it appears in a set of partbooks published in Venice in 1554 by the Scotto Press (Motetti del Laberinto, a cinque voci libro quarto) and has been especially prepared for this recording. In the first part of this tribute motet Jacquet places himself at the edge of a tempestuous Adriatic Sea, the waters unsettled and churning as he recalls the virtues of his deceased master; here the polyphony is dense and offers a haunting feeling of the ebb and flow of rough waters. In the second part, Jacquet sings, as if to the sea, ‘artful verses with a antique sound’. It begins ‘Let us recount, ye Muses, Josquin’s ancient loves’. Here Jacquet pays homage by embedding sections of five of Josquin’s most popular works into the polyphony: Praeter rerum seriem, Stabat mater, Inviolata integra et casta es, Salve regina (which is included here) and Miserere mei Deus. The work ends in triple time, ‘the rustling reeds repeating everything’ as if assessing Jacquet’s musical discourse, and the waters then ‘nod approval’ and become still, as so beautifully expressed in the final cadence.

It is a great pleasure for us to present this recording of music written to honour one of the great composers of the Renaissance, Josquin Des Prez. Josquin’s sacred and secular works have long been a part of our repertoire, thanks largely to the fact that he scored so many works for 5 or 6 voices, which suits our line-up.

Josquin’s influence on choral music in the years after his death was huge. Throughout the 16th century composers were still using material from his motets as the basis for masses, magnificats, and other motets. He forged a new means of expression, and a new musical vocabulary so rich in potential that hundreds of other composers were able to build on the style and use it to their own ends. Where today accusations of plagiarism would be bandied about, in the Renaissance composers openly borrowed from each other’s works as a tribute to their fellow musicians.

There was also a tradition of composing musical tributes after the death of a significant composer. Josquin penned a tribute to Johannes Ockeghem, entitled La déploration sur la mort d’Ockeghem setting Jean Molinet’s poem Nymphes des Bois. Josquin’s own death inspired some sublime works by Benedictus Appenzeller, Nicolas Gombert, Jacquet of Mantua, Hieronymus Vinders and Jean Richafort, whose Requiem 'in memoriam Josquin Des Prez' forms the backbone of this recording. We are delighted to be presenting these tributes alongside two of Josquin’s own works in new editions prepared by Dr David Skinner.

The King’s Singers would like to thank David Skinner for his scholarship, and for his enlightened approach to the performance of this wonderful music. Thanks also must go to Adrian Hunter for his skilled combination of the roles of producer and engineer. As ever we are indebted to everyone at Signum, and especially to Steve and Matt. Last but not least our thanks go to Claire and Rebecca at Music Productions.