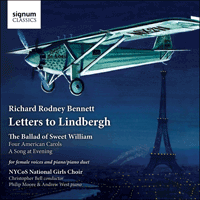 Letters to Lindbergh & other choral works

One of the most versatile musicians of his generation, Richard Rodney Bennett was at the forefront of British musical life for nearly half a century. This new recording from the National Youth Choir of Scotland's National Girls Choir compiles a programme of Bennett's choral works from across his compositional life, as well as a collection of charming folk-tunes and nursery rhymes for piano duet (Over the hills and far away).

'Like his one-time mentor Benjamin Britten, Bennett showed a genuine aptitude for writing music for children, particularly vocal works. Christopher Bell and the NYCoS National Girls Choir offer a delightful and varied programme of this corner of Bennett's output. In addition to the amusing Letters to Lindbergh, the album includes The Ballad of Sweet William, The Aviary, Dream-Songs, A Song at Evening and Four American Carols. All receive idiomatic readings from the clean, incisive voices of this superb Scottish choir, and throughout one marvels at Bennett's gift for distinctive yet always memorable melody. [This album] can be warmly recommended' (Choir & Organ)

'Produced before Bennett's death, this forms a moving tribute to a masterly composer. The immediately attractive opener, Letters to Lindbergh, quirkily imagines correspondence the aviator might have received from, among others, Pluto (the cartoon dog!) and the Titanic. His gift for soaring, exciting and grateful vocal lines is shown time and time again, and this young Scottish group repay him in spades. Warmly recommended' (Classical Music Magazine)

One of the most versatile musicians of his generation, Richard Rodney Bennett has been at the forefront of British composers for nearly half a century. His original compositions include numerous orchestral works, chamber, choral and piano works, ballets, songs, madrigals, jazz pieces and many award-winning film scores and music for television, from Far from the Madding Crowd, Billion Dollar Brain and Murder on the Orient Express to Four Weddings and a Funeral, Doctor Who and Titus Groan. He has appeared as a soloist in piano concertos, classical recitals, and as accompanist to well-known jazz and cabaret artists in numbers by Gershwin, Jerome Kern, Irving Berlin and many other popular composers.

Bennett was born on 29th March 1936 into a musical family in Broadstairs, on the Kent coast, and began composing as a child. His mother, who had been a student of Gustav Holst at St Paul’s Girls’ School, began teaching him piano from the age of five. In 1953 a scholarship took him to the Royal Academy of Music in London, where he studied with Lennox Berkeley and Howard Ferguson. He has been described as ‘the most spectacular rising star on the British musical scene in the Fifties’. By the end of his first year he had written his first three string quartets, which were enthusiastically reviewed by London critics for their natural and convincingly expressive use of the 12-note method. And Bennett was still a RAM student when he met the film conductor John Hollingsworth, who gave him his first opportunities to write film soundtracks, starting with small-scale scores for industrial documentaries. (One of his first successful orchestral works, Aubade, was written in Hollingsworth’s memory.)

At the same time he was studying informally with the pioneering British serial composer Elisabeth Lutyens, who aroused an interest in more avant-garde techniques and idioms that led him to visit the Darmstadt summer schools. In 1958 a French government grant led Bennett to Paris, where he underwent two years’ intensive tuition from Pierre Boulez and Olivier Messiaen. They represented a radically different aesthetic from his RAM teachers, and he continued his absorption, begun with Lutyens, of the then exciting tenets of post-Webernian serialism. At the same time however he was establishing himself as a successful jazz pianist. He also formed a two-piano duo with his RAM classmate and friend Susan Bradshaw, and they performed widely together for over 20 years. Other regular performing partners have been the soprano Jane Manning and the horn player Barry Tuckwell.

On his return to London, Bennett’s unusual mixture of modernist rigour, lyrical warmth and first-rate craftsmanship soon garnered him significant commissions and laid the ground for international success. He received the Arnold Bax Society Prize in 1964 and the Ralph Vaughan Williams Award for Composer of the Year in 1965. Both by generation and by his partiality for 12-note serial techniques Bennett tended to be grouped with the so-called ‘Manchester School’ of Peter Maxwell Davies, Harrison Birtwistle, Alexander Goehr, Nicholas Maw and others who came to prominence as Britain’s first significant post-war musical avant-garde in the late 1950s and early 1960s. But Bennett’s interests and theirs at most occasionally coincided: he was set upon a different creative path, as his highly successful jazz ballet of 1963, Jazz Calendar, showed: the first of a string of jazz-oriented works which take in music written for specific performers such as Cleo Laine and stretch at least as far as the Concerto for Stan Getz of 1990. But his most significant major works of the 1960s and 1970s included three operas: The Mines of Sulphur and A Penny for a Song for Sadler’s Wells, and Victory for the Royal Opera House, Covent Garden. (There was also a highly successful children’s opera, All the King’s Men.) These were followed by the full-length ballet Isadora, premiered by the Royal Ballet in 1981.

By this time Bennett had become increasingly acclimatised to life in the USA. He was composer-in-residence at the Peabody Institute, Baltimore in 1969-71 and regularly appeared as a soloist at jazz clubs in New York and elsewhere. In 1979 Bennett moved to New York. He has toured the USA as an accompanist (for example with the singer Marian Montgomery) and appeared there many times in his own works. But he has kept his British citizenship and is a frequent visitor to his native country. He was awarded the CBE in 1977, and was knighted in 1998.

Since he has a gift for memorable, quintessentially English melody and an instinctive lyric responsiveness to English poetry, Bennett has been able to produce a distinctive, highly attractive and varied and consistently imaginative body of choral work over a period of almost 50 years. Moreover his extensive knowledge of English lyric poetry has enabled Bennett to choose a wide and often fascinating range of texts for appropriate setting. Renowned for his practicality and ability to adapt to any level or idiom, Bennett has been able to produce many works for children and young performers, as the works on this disc eloquently demonstrate. Though they encompass a wide range of texts and approaches, they are all marked by perfect adaptation of words to music, an attractive melodic appeal, wit, humour, pathos and notable economy of means.

One of Bennett’s most immediately attractive works in this vein is Letters to Lindbergh, composed in 1982 as a cantata for high voices and piano duet. The poems by Martin Hall quote whimsically from a selection of the many letters supposed to have been received by the first solo Atlantic aviator, Charles Lindbergh, during his non-stop solo flight from New York to Paris in 1927. His correspondents include Scott of the Antarctic, the rusting hulk of the Titanic and the Walt Disney cartoon dog, Pluto.

An altogether grimmer piece is The Ballad of sweet William which, like the Lindbergh songs, has a demanding accompaniment for piano four hands. Dating from 2003, this work was composed for the Young People’s Chorus Of New York, and is based upon an anonymous 18th-century Scottish folk ballad, Sweet William’s Ghost, first printed in 1740. Bennett’s vivid setting was first performed by the chorus at the Ethical Culture Society on 25th April 2004.

The cycle of five poems about birds entitled The Aviary, by authors such as John Clare and Alfred, Lord Tennyson, is the earliest work in this collection, composed in 1965. It has become one of Bennett’s best-established lyric sequences through its ideally singable, melodically direct idiom, which has made it (and also its companion cycle from the same period, Insect World) a favourite with amateur choirs.

Perhaps even better known is the short cycle of Dream-Songs from 1986 for unison high voices (or solo voice) and piano. Bennett seems to have an imaginative affinity with the atmospheric verses of Walter de la Mare, which he clothes in this cycle with strikingly appropriate and evocative music.

The remaining choral works on the programme are comparatively recent creations. A Song at evening, a setting of texts gathered by Walter de la Mare into a poem titled ‘Before Sleeping’, is a beautifully shaped occasional piece from 2009, written to mark the retirement of Christopher Berriman as Director of Music at Northbourne Park School (Bennett has since made a version of this piece for voices and small orchestra). Even more recent is the set of Four American Carols from 2010, for chorus and piano or strings. In exploring these American texts Bennett has produced tenderly melodious, rhythmically interesting and harmonically subtle settings that refer to the traditions of both Spiritual and Blues.

As a foil to the vocal pieces we hear Bennett’s delightful suite for piano duet, Over the hills and far away—a characteristically fresh and original take on some very well-known folk tunes and nursery rhymes, served up with affection and elegant sense of style.