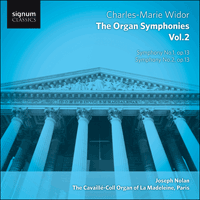 Bridging the generations from Mendelssohn to Messiaen, Empire to Republic, Widor was born to the organ. His Lyonnaise kinsfolk were organ-builders, he showed early talent for the instrument, and for decades was the embodiment of its might and splendour across the Gallic domain—his ‘Organ Symphonies’ were genre-defining in their influence.

Joseph Nolan is an internationally renowned organist, acclaimed as ‘brilliant and such an astute musician’ (Gramophone). He was appointed to Her Majesty’s Chapels Royal, St James’s Palace in 2004, and has since been invited to perform and record in some of the world’s premiere venues—including the refurbished Organ of Buckingham Palace Ballroom and the Organ of Saint-Sulpice in Paris. The Cavaillé-Coll Organ of La Madeleine, Paris is a similarly renowned instrument, with former chief-organists including Camille Saint-Säens and Gabriel Fauré.

'The first volume of Nolan's survey of all the Widor organ symphonies unsurprisingly dispatched the most popular numbers (5 & 6). Volume 2 features the first two symphonies. While ground-breaking in their symphonic concept, Widor's ideas are still developing in an exploration of different tonal and structural possibilities. In the wrong hands these disparate movements can lack cohesion, but there is no doubting that Nolan's great affinity with this music really lifts the notes off the page. The organ of La Madeleine is beautiful in the softer movements, but I couldn't help longing for Widor's instrument at St Sulpice in the tutti passages, which would deliver more grandeur and clarity' (Choir & Organ)

‘Unerringly Cavaillé-Coll and a superb acoustic ambience captivate and grab us—by the ears and indeed by the throat [lumps in the] from bar one. Unbounded admiration, as Widor judges to a nicety the moment to call forth Swell reeds … the recording clarity is remarkable, only final chords revealing that we have been enjoying the fruits of some six seconds of reverberation. Joseph Nolan—formerly organist of St James's Palace, and, from 2008, of Perth Cathedral, Australia—is an utterly persuasive executant at the console. Thoroughly enjoyable' (Organists' Review)» More

‘There is no preparation in the scheme of things for the appearance of a Widor. His work comes like a clap of thunder out of a clear sky, and not even the work of Franck can explain it. It is due entirely to the outstanding personality of the man’ (Albert Riemenschneider, 1934). Dedicated in their 1879 incarnation to Aristide Cavaillé-Coll, creator of the French Romantic symphonic/’orchestral’ organ, the Third Empire Symphonies Op 13 were published in Paris in early 1872. In the absence of any autographs, no genesis is traceable, though there is evidence to suppose that some of their ideas may date from the 1860s. Hailing them ‘the greatest contribution to organ literature since the works of Johann Sebastian Bach’, laying the foundations of modern organ technique, Widor’s definitive modern biographer and editor, John R Near (2011), observes that his ‘lifelong practice of revision affected [their content] most noticeably, undoubtedly because many of [their movements] were either born of his Sunday improvisations at Saint-Sulpice or of an earlier conception […] In the different editions of Op 13, pieces often appeared in a drastically different guise […] in many respects these symphonies were experimental works on which Widor continued to reflect the rest of his life. Undergoing many stages of revision, whole movements were added, omitted, or altered -several were fleshed out considerably […]Widor earned his living primarily by playing the organ and publishing his music. The [four] Op 13 Symphonies fulfilled the varied musical requirements of church service, organ inaugurations, and salon concerts’. Confirming the composer as his own most demanding critic, five principal Paris editions exist: (a) 1872, (b) 1887, (c) 1900-01, (d) 1914-18, ‘revised, and entirely modified’ [1920], and (e) 1928-29.

In his impassioned avant-propos prefacing the 1887 edition, Widor took care to emphasise the rôle, ‘glory’ and contribution of his mentor, Cavaillé-Coll—dating his dawn to 1839 (the organ of the Palais de l’Industrie at that year’s Paris Exposition, housed subsequently in the Lutheran church of Les Billettes). ‘It is he who conceived the diverse wind pressures, the divided windchests, the pedal systems and the combination registers; he who applied for the first time Barker’s pneumatic motors [levers], created the family of harmonic stops, reformed and perfected the mechanics to such a point that each pipe—low or high, loud or soft—instantly obeys the touch of the finger, the keys becoming as light as those of a piano—the resistances being suppressed, rendering the combination of [all] the forces of the instrument practical. From this result: the possibility of confining an entire division in a sonorous prison—opened or closed at will—the freedom of mixing timbres, the means of intensifying them or gradually tempering them, the freedom of tempos, the sureness of attacks, the balance of contrasts, and, finally, a whole blossoming of wonderful colours—a rich palette of the most diverse shades: harmonic flutes, gambas, bassoons, English horns, trumpets, celestes, flue stops and reed stops of a quality and variety unknown before. The modern organ is essentially symphonic. The new instrument requires a new language, an ideal other than scholastic polyphony. It is no longer the Bach of the Fugue whom we invoke, but the heart-rending melodist, the pre-eminently expressive master of the Prelude, the Magnificat, the B minor Mass, the Cantatas, and the St Matthew Passion […] henceforth one will have to exercise the same care with the combination of timbres in an organ composition as in an orchestral work’.

Historically, Widor’s five-manual, 100-stop, 7,000-pipe Cavaillé-Coll at St Sulpice, dedicated in 1862, will always rank supreme among the nineteenth century’s most technologically-defining, fantasy-creating sound-machines. In the 1870s, when Widor ruled the organ loft, it was no antiquated fossil but a wondrously re-born creature. And its vocabulary was infinitely varied. It had nothing to do with the ‘old instruments’ of Bach or Handel—which, Widor reminds, ‘had almost no reed stops: two colours, white and black, foundation stops and mixture stops—that was their entire palette; moreover, each transition between this white and this black was abrupt and rough; the means of graduating the body of sound did not exist’. When it came to sonics and action, power and colour, a big Cavaillé-Coll bore little resemblance to its ancestors. Contemporaneously with Bechstein, Blüthner and Steinway in the piano arena, Aristide took his organs to new heights, and gave composers an innovative, arresting new medium.

First of the canon, the C minor blueprints the genre. Less a prescribed symphony, more a tonally diverse suite—‘a collection of fantasy pieces, most often without ties between them’ ran Widor’s definition of the latter (1923)—where set-numbers, mood tableaux and contrapuntal routs become cumulatively more important than (and even deny) sonata principle: ‘symphony’ in the sense of an antique ‘concord of sound’. The work divides into seven movements, linked pivotally through the various notes of the root triad (C, E flat, G): Prélude, Allegretto (A flat major), Intermezzo (G minor), Adagio (E flat major), Marche pontificale (C major), Méditation (E flat minor), Finale (C minor). The muscular, tactile style of Widor’s writing is apparent from the onset, the forte moderato quaver subject, slurred/staccato, announced on pedals, the manuals entering to forge a gritty, harmonically intensified trialogue—which tensions are then pursued in the second movement. The Schumann of chords clarified down to staccato semiquavers between the hands, and of boldly proclaimed dotted rhythms, is never far away in the third and fifth movements, the grandiose rondo fifth (paraphrased two years later in Lemmens’s First Organ Sonata) in the spirit of both Gounod’s 1869 Marche pontificale, dedicated to Pius IX, and the ceremonious processionals Widor used to accompany regularly during high feast days at Saint-Sulpice. Compound metres inform the fourth and six movements—a 9/8 chorale (including an unexpected D major semitone drop, cf the sidestepping of the second movement) and a 6/8 barcarolle cadencing in the major. In the closing four-part fugue, the Mendelssohnian cut of the Prélude is replaced by one of tougher stance and chromaticism: the dynamic and grammar may be baroque/classical—the final two bars are pure Bach—but the speech is avowedly 1870 Liszt/Wagner—Widor’s heroes. The leonine six-bar subject, fff, spans a minor tenth. All twelve semitones of the scale are spelt out. And, five pages on, affirming point d’orgue notwithstanding, there is no Picardy third to appease the emotions, triumph the moment, or relent the debate. Tough music for serious minds.

Less overtly polyphonic than the First, the Second emphasises tone-colour: ‘Widor,’ says Near (1991), ‘seems to be taking the listener on a timbral tour of the organ’, with each movement featuring ‘fresh combinations’ of sound. The 1901 edition introduced several changes to the original—most drastically the (arguably mis-advised) replacement of the original fourth movement, a chattering, fugato-gifted E major staccato scherzo in 6/8, with a (compositionally later style) Salve Regina in D minor, drawing on the Gregorian antiphon for the Blessed Virgin Mary. ‘Hail, holy Queen, Mother of Mercy, our life, our sweetness and our hope. To thee do we cry, poor banished children of Eve; to thee do we send up our sighs, mourning and weeping in thiés vale of tears.’ Near believes that the distinctively sectional character of this chorale fantasy ‘suggests the alternatim practice commonly adopted by the grand organ and choir organ in large French churches’. Towards the end, against a texture of left-hand semiquavers, the pédale trompette, fortissimo, sounds the closing line of the plainchant: ‘O clemens, O pia, O dulcis Virgo Maria’ (O clement, O loving, O sweet Virgin Mary). The fifth movement, an Adagio in D major, was written originally (uniquely) for just the short-resonating voix humaine, re-registered in the 1887 revision. The change of tempo to Andante in 1901, contradicting the Adagio heading, ‘seems never to have captured Widor’s attention’ (Near). The 1901 re-labelling of the 3/4 first movement—from Prélude to Præludium circulare—would appear to have been a gesture drawing attention to the petit labyrinthe harmonique trajectile of the music: mirroring a tradition from the early sixteenth century onwards, including Beethoven and Chopin in the generations preceeding Widor, it begins and ends in the tonic but en route orbits chromatically through the keys.

Placed second, and broadly unchanged in subsequent editions, the 12/8 G major Pastorale, ‘replete with grace and aural colour’ (Near), inhabits a post-Bachian/Berliozian world, somewhere between Jesus bleibet meine Freude and L’enfance du Christ. In March 1870 Ménestrel reported Widor playing ‘a beautiful fantaisie pastorale’ at Saint-Sulpice: the Pastorale of the Second Symphony, Near wonders (2011)? The ensuing Andante in B flat major is a chorale-like scena (on an anacrustic theme determined by repetitive two-quaver/two-crotchet patterns) displaying Widor’s schooled command of motivic and sequential development. Likewise his habitual pleasure in key-shifting. Scarcely has the theme been announced before we are sharing a calvados or two with D major, F sharp major, B minor, G major/minor—the start of an adventurous ramble. Anticipating the Fifth Symphony (1879), the tripartite Finale is a grand toccata—slurs and staccato as critical to its thematic profile as harmonic thrust and resolution are to its architecture.