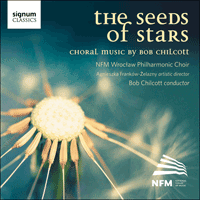 The seeds of stars & other choral works

'Freshness of timbre, individuality in the four voice-sections and genuine versatility of interpretive approach are major characteristics. It clearly helps to have the composer, formerly a chorister of distinction, at the tiller: the performances sound absolutely secure in intent and unfussily authoritative' (BBC Music Magazine)» More

'Britain's Bob Chilcott has become a truly international figure in choral music in recent years, as this disc richly testifies, with 18 typically graceful and arresting pieces written for choirs in the Czech Republic, the US, Japan, Newfoundland and Germany, sung with warmth and commitment by the Wrocław Philharmonic. The album takes its title from a beautiful work originally written for 800 singers and players, with words celebrating nature's renewal by the poet Charles Bennett, who collaborated so successfully with Chilcott in his environmental epic The Angry Planet at this year's Proms' (The Guardian)

In 2010 I was invited by the British singer David Clegg to work with the NFM Wrocław Philharmonic Choir, a young professional choir mentored by the British conductor Paul McCreesh and led by the charismatic conductor Agnieszka Franków-Zelazny. David had invited a number of British choral musicians, of which I was one, to work with the choir, and with them I gave a concert of English music that included a number of my own pieces. The choir brought a different colour to this music, one which was immediately warm and giving. They worked enthusiastically and willingly in the English language and this, coupled with their commitment and wonderful spirit, led to us making this recording together.

This recording features a collection of shorter pieces which I have written or arranged over the past 13 years or so for a variety of different choirs. The first seven pieces are carols written for Advent and Christmas. The shepherds sing, a setting of a Christmas text by George Herbert, was commissioned by a friend as a gift for Libby Buchanan, a distinguished lady who runs her own organic farm in West Sussex, and the poem reflects her deep love of nature and the land. The piece was first performed at the Chapel Royal in December 2011. Two of the following pieces, Nova! Nova! and The rose in the middle of Winter were commissioned by David Hill and the Bach Choir. The first, a setting of a 15th-century macaronic text was written in honour of the 80th birthday of Sir David Willcocks and the second, to a new text by the poet Charles Bennett was written to honour his 90th birthday.

I was introduced to the poetry of Kevin Crossley-Holland by Philip Brunelle. Philip is the founder of one of the most influential music series in the United States, VocalEssence, and he has been Organist and Choirmaster of Plymouth Congregational Church in Minneapolis for over 40 years. The heart-in-waiting was commissioned to honour Philip’s 40th anniversary at the church and dedicated to David Buran, a choir member who had sung in the choir for 40 years. This wonderful poem was one of a set of four that Kevin wrote, all of which I consequently set. Two more are sung on this recording: Pilgrim Jesus was written for Matthew Owens and the choir of Wells Cathedral and Jesus, springing was written for the Harrow School Chapel Choir.

Lulajże, Jezuniu was arranged specially for the NFM Wrocław Philharmonic Choir and Agnieszka Franków-Zelazny. This melody, perhaps the most well-known of Polish carols was quoted by Frederic Chopin in the centre section of his Scherzo No 1 Opus 20.

For a number of years I was on the board of a festival in Minnesota dedicated to the promotion of boys’ and mens’ choir singing. It was a wonderful festival which attracted groups from all over the world and in 2004 the festival was hosted in Hradec Králové in the Czech Republic by the Czech Boys Choir. I wrote The dove and the olive leaf for this festival and it was premiered in the Dvořák Hall in Prague. The year before I had conducted at a youth choral festival that took place by the Sea of Galilee in Israel and while there I went to the place where the peace agreement between Israel and Jordan was signed. The place was full of powerful images of the dove of peace—pictures, figures and ornaments which gave me the idea for this piece, and the text I used was the single verse from the Book of Genesis, sung both in English and Hebrew, that tells of the dove that brings the olive leaf to Noah, signifying the end of the great flood.

Remember me was written for Sue Hollingworth and the Scunthorpe Co-operative Junior Choir and commissioned by the BBC after the choir became BBC Radio 3 Choir of the Year in 2008. I wrote this song just after the tragic killing of 68 young people on the island of Utøya in Norway and so I chose the powerful poem by Christina Rossetti in response to this. In the live performance of this piece the choir uses sign language, which I love, to reflect those who sing in ‘the silent land’ spoken of in this eloquent poem.

Simple pictures of tomorrow, a setting of the powerful translation by Gilbert Bowen of the Paul Éluard poem was written in 2004 for the 25th anniversary of the Manchester Chorale. Since that same year I have travelled regularly to Japan and have been very fortunate to come into contact with the powerful and flourishing choral life there. Over this time I also have developed a very close friendship with Keiichi Asai, the President of the Japan Choral Association and founder and conductor of the Kyoto Echo Choir. Keiichi invited me to Kyoto in 2011 to conduct two concerts of my music with the Kyoto Echo Choir as part of the choir’s 50th anniversary celebrations, and I wrote for them the setting of John Dryden’s poem Happy the man and also Furusato, a set of five arrangements of Japanese songs. These songs have a very special meaning for many Japanese people—they have become part of the folklore and many would have sung them since childhood. The third, fourth and fifth songs in this set have melodies written by the composer Teiichi Okano, clearly a man with a special melodic and communicative sensibility.

In 2010 I wrote The bread of life for three prize-winning German choirs as a special project for the Kultursommer Rheinland-Pfalz in Mainz. The piece was first performed at the Mosel Musikfestival, and Our Father ’The bread of life’ is the culminating section of the work. The final piece on this recording, The seeds of stars was written originally for children’s choir, adult choir and orchestra and was first performed by over 800 singers and players. It was written for Festival 500 in Newfoundland, a festival that has become a flagship event in the world of choral singing. The specially written poem by Charles Bennett speaks of rebirth and hope as shown to us through the power of nature with its ability to rebuild and renew.

In July 2012 I gave a presentation on choral music in Britain at a choral summit in Beijing organised by the International Federation of Choral Music and the Chinese Government. I heard musicians from Estonia, the United States, Catalonia, Venezuela, Bulgaria and Japan and many other countries speak passionately of how choral music has affected the lives of many people in those countries in such an important and positive way. It reminded me of my own determination to do what I can in this regard through my own work. I am very grateful for what a life in music as a composer, conductor and singer has given me, and if my own music plays any little part in encouraging people to sing and to enjoy the power of singing together then that is something for me to be very thankful for. I am also grateful to the NFM Wrocław Philharmonic Choir for all their hard work and their generosity of spirit, and producer Adrian Peacock, a choral man through and through who helped this recording come to life with his enthusiasm and encouragement.