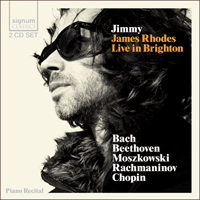 In 2008/09 James Rhodes saw his profile go from complete unknown to rising star, attracting celebrity followers including Stephen Fry and Sir David Tang. He swiftly went on to headline London's historical Roundhouse, where he was the first classical pianist to perform since it's re-opening.

In 2010 he made his television debut in the BBC Four documentary Chopin: The Women Behind the Music and in 2011 James went on to present and perform in his very own television series James Rhodes: Piano Man on Sky Arts.

This new album—recorded live at The Old Market theatre in Brighton—captures the energy of Rhodes in concert as he performs and entertainingly discusses works by Bach, Beethoven, Chopin, Rachmaninov and more in this 85-minute programme.

'Rhodes obviously has it in him to be a persuasive Beethoven interpreter. Whatever persona Rhodes chooses to cultivate in terms of presentation, he certainly is a serious musician' (Gramophone)
'James Rhodes (known here as 'Jimmy') is every bit the modern-day rock-star pianist; he unashamedly wears jeans and trainers on stage and—horror of horrors!—actually speaks to his audience … but beneath the showmanship is real substance; what Rhodes has to say—and play—is infinitely interesting, pertinent and amusing' (International Piano)» More

There’s something about the idea of recording a live album that is in equal parts terrifying and thrilling. Something that I’ve always tried to do in my studio albums is to create the sense of urgency and risk that is inevitable in a live concert. This is more in hope than expectation, though, as knowing that one has the opportunity to record multiple takes tends to remove some of the focus and fear that, on a good day, can make a live concert electric.

But after three studio albums I felt that it was time to man-up and go down the live route. ‘Jimmy’ (nice and casual, what my friends call me and what my head calls me at Jam when I’m trying to calm myself down or psych myself up) needed to be an informal experience so we opted for an intimate venue away from London and the usual classical concert halls in the hope, as ever, of attracting a new audience to the genre, and this is the result. It was recorded over two evenings at Brighton’s magnificent and charming TOM (The Old Market Theatre) in December 2011, capturing what I felt were two exciting live gigs in front of a great bunch of people, many of whom were, much to my delight, classical first-timers.

I especially wanted to make this CD as faithful as possible to my normal concerts, and with that in mind I’ve opted to keep in all the chatting between pieces. One of the great things about modern technology is that you can easily fastforward the talking (each segment being on its very own track), or remove it entirely from your iTunes library should you get bored senseless by my voice. I’ve often wished that more classical musicians would take the time to communicate to their audience during their concerts, and I hope you’ll indulge me for doing so.

Opening up the disc is a little musical Valium in the form of Bach’s transcription of Alessandro Marcello’s Adagio from his Oboe Concerto. This is a piece I play at every concert I give, mainly to calm myself down, but also because, simply put, it reminds me of everything that is great about music.

Next up comes the genius tramp that was Beethoven. In 1803-4, at the start of what’s since become known as his ‘heroic decade’ (yes, decade), Beethoven took delivery of a new and upgraded piano (think iPhone 4S rather than Nokia 8810) and composed his Waldstein Sonata. There are three movements—the first comprised of little more than the three most basic building blocks of piano-playing (scales, chords and arpeggios) which in Beethoven’s hands is testament to what is possible to build from the simplest of ingredients. The second movement was originally an 11-minute set of variations which on the advice of friends, thankfully, he exchanged for an intense and at times frankly weird 28-bar ‘introduzione’ to the finale. This last movement rondo (which the French seem to feel resembles the dawn coming up on a new day, calling it as they do the ‘dawn sonata’) is filled with everything that makes Beethoven so immortal—the virtuosity, the sparkle, the ‘inferiority’, the anger and grief wrestling alongside hope and surrender. And let’s face it, anything enchanting enough to convince the French to call it something vaguely optimistic and rosy has got to be a work of genius. It’s known as the Waldstein because LVB dedicated it to Count Waldstein, a supremely rich patron who threw money at Beethoven so he could focus on making music and not worry too much about bills. Something that I really feel should happen more today (I can be contacted through jamesrhodes.tv if any of you are feeling moved to generosity).

Moszkowski’s Etude in F major sent the audience off into the bar for the interval—it’s a short, irritatingly difficult piece with at least 15-20 notes per second. Any piece of music that lasts 90 seconds but requires at least 25 hours of practice has got to be worth making the effort for.

Rachmaninov kicks off the second half with a piece he wrote as a teenager. His C sharp minor Prelude became so famous and requested that he grew to hate it (I imagine Stephen Fry feels the same way about his Lord Melchett impression), but it’s a work of utter magnificence. Very much a depiction of the internal dialogue that no doubt frequently haunted the depressive Rachmaninov, there’s a constant sense of menace and unease that gradually builds to a frenetic climax before subsiding into nothingness.

From one precocious teenager to another, next comes the Chopin/Balakirev Romanza. Chopin’s first Piano Concerto was actually written second but published first, hence the number 1 on the title page. Irritatingly enough he wrote it at the age of 19 (there’s something to be said for the days before Xboxes and HBO), and although the whole concerto is dedicated to the male pianist Kalkbrenner, this slow movement is for me a love letter to one of Chopin’s crushes (doubtless a female singer—he was obsessed with them in the way only a horny and awkward teenager is allowed to be without appearing creepy). Chopin said that there was ‘nothing more odious than music without hidden meaning’, and I love the idea of providing a soundtrack and letting the listener make up the movie. This version is not, as originally written, for piano and orchestra, but rather a transcription by the great Russian composer Mily Balakirev who somehow, rather miraculously, manages to squash both an entire orchestra and solo piano down into just two hands.

The last major piece of the concert is Bach’s epic Chaconne from his D minor solo Violin Partita, arranged for piano by the impressively-named Ferruccio Dante Michelangiolo Benvenuto Busoni. This is the piece that kicked off everything for me. It was one of the first pieces I fell in love with (on an old cassette given to me by my teacher Colin Stone when I was 14), and it was the first piece I ever played to the guy who was my manager and take me from psychiatric patient with few social skills to psychiatric patient with few social skills and a record contract and concert diary. It has been suggested but not confirmed that Bach wrote this as a homage to his dead wife. It is indeed soaked through with grief and rage. Yet such is the majesty of Bach that, despite the lack of Prozac, 12-step groups and shrinks, there is also a sense of surrender and acceptance that is always a profound source of inspiration.

No concert is complete without encores (dance, monkey, dance!), and the two here are firm favourites of mine. First up is Liszt’s piano-arrangement of Schumann’s love song ‘Dedication’ (Widmung in German) which he wrote for the love of his life Clara in 1841. Listen out for the musical quote from the Ave Maria (Clara’s favourite piece) that he drops in towards the end—this is one of the ultimate love songs, and it clearly worked as they went on to get married. Although he did write her over 180 songs in that year alone, so it may just be a combination of persistence and stalking that got the job done.

Not being terribly comfortable with overt displays of emotion, I wanted to lighten the mood somewhat and chose for the final encore the great Russian pianist Ginzberg’s barmy and wrist-breaking transcription of Grieg’s In the hall of the mountain King.