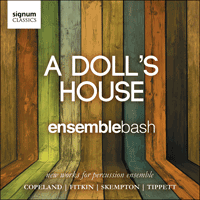 ''A Doll's House' is a collection of mostly short (two- to six-minute) and refreshingly varied pieces by British composers born between 1943 and 1973, commissioned and performed by the percussion quartet Ensemble Bash now celebrating its twentieth anniversary. Their crisp precision and commitment to each work is abetted by vividly close-up and detailed engineering plus rapid DJ-like segues between selections that create a seamless, sustained programme' (Gramophone)
'This selection of new works for percussion ensemble offers a myriad different directions, several more refined and delicate than you'd expect from music. made by bashing. Howard Skempton's 'Slip-stream', for instance, is the most restrained of percussive duets, with vibes and glockenspiel twinkling delicately over shimmering cymbal, while. Peter McGarr's 'Sound Asleep' employs wind and string instruments alongside a wide range of percussion for a shifting evocation of a dreamscape. The longest piece is Keith Tippett's absorbing 'Dance Of The Dragonfly', a jittery work whose long pauses, punctuated by sudden rapid bursts of activity, skilfully evokes its insect subject's brief but dazzling life' (The Independent)

A Doll’s House contains a selection of new works for percussion ensemble commissioned by ensemblebash between 2002 and 2012.

Shard: The triangle forms the spine and the starting point of Shard. There then follows two minutes of bubbling congas and marimba which surface as an insistent and disorientating argument between the main keyboard instruments. The piece ends with a sudden chop.

Slip-stream: The starry, twinkling sound world of Slip-stream is a softly revolving duet between vibes and glockenspiel. Two exhaling cymbals provide the bed on which these two instruments gently intertwine.

Rimfire: Rimfire is a vocal and drumming extravaganza. Drums, cowbells and vocals are graduated throughout the group from low to high and the piece is designed to be performed antiphonally around the audience as rhythms are passed around with startling speed.

Bash peace: David was another great friend and supporter of the group from our early days. He wrote us this small, intimate piece (where all four of us kneel to play two steel pans) as a contrast to the more explosive side of our performances—this is alluded to in the title he chose for this work.

Dance play: Marimba and vibes dance to the drums—occasionally stopping for balance—in Nick’s work. The soundworld becomes darker and less focused halfway through. Light is allowed in again in the final coda until the inevitable rest.

Sound asleep: Sound asleep is a trip brimming with serpentine memories, melodies, music boxes and imaginary meetings between George Formby and Paco Peña, Les Dawson and Beethoven, Charlie Parker and Haydn—all bathed in the dazzling light of a Northumberland sunrise.

Breather: ensemblebash has worked with Stewart for most of the life of the group. Breather is chock-full of shapeshifting rhythms, grumbling bass and jagged corners—all propelled by an unrelenting drum set.

Echolalia: Echolalia is the automatic repetition of another’s vocalisations. Two pairs of players play a game where musical phrases are tossed around, ricocheting off the walls and bouncing off different instruments.

Dance of the dragonfly: Keith’s skittering, jittery piece is descriptively based on the short life of a dragonfly. Fast, intricate rhythms and long silences adorned with water drop pings create a snapshot of life on the riverbank for this most beautiful of creatures.