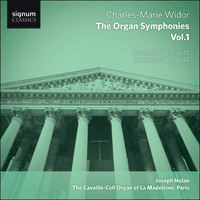 Bridging the generations from Mendelssohn to Messiaen, Empire to Republic, Widor was born to the organ. His Lyonnaise kinsfolk were organ-builders, he showed early talent for the instrument, and for decades was the embodiment of its might and splendour across the Gallic domain—his ‘Organ Symphonies’ were genre-defining in their influence.

Joseph Nolan is an internationally renowned organist, acclaimed as ‘brilliant and such an astute musician’ (Gramophone). He was appointed to Her Majesty’s Chapels Royal, St James’s Palace in 2004, and has since been invited to perform and record in some of the world’s premiere venues—including the refurbished Organ of Buckingham Palace Ballroom and the Organ of Saint-Sulpice in Paris. The Cavaillé-Coll Organ of La Madeleine, Paris is a similarly renowned instrument, with former chief-organists including Camille Saint-Säens and Gabriel Fauré.

'The famous Widor organ symphony is the Fifth, its brilliant toccata finale a perennial wedding favourite. Joseph Nolan couples the Fifth with the Sixth Symphony on this first Widor volume, playing the magnificent Cavaille-Coll instrument of La Madeleine in Paris—an organ of just the range and dimensions for which Widor conceived these thrilling five-movement pieces. Gothic music meets Gothic organ here in performances that encompass a broad expressive spectrum from quiet meditation to dramatic thunder and lightning' (The Times)
'Nolan here offers the first fruits of seven nocturnal recording sessions in a row, during which he put down all ten of Widor's organ symphonies at the console of the superb four-manual, 60-stop, 4426-pipe Cavaille-Coll organ of La Madeleine, Paris. The first two symphonies of Widor's Opus 42 are grandly Romantic, five-movement behemoths that balance huge multicoloured edifices of devilish complexity with softer-lit landscapes populated by angelic choirs of varying dimensions … an absolute ripper of a performance that will have you positively skipping down the aisle' (Limelight, Australia)» More

Bridging the generations from Mendelssohn to Messiaen, Empire to Republic, Widor was born to the organ. His Lyonnaise kinsfolk were organ-builders, he showed early talent for the instrument, and for decades was the embodiment of its might and splendour across the Gallic domain. Through the intervention of Aristide Cavaillé-Coll, friend of the family, he went to Brussels to study with Jaak Lemmens, a noted exponent of Bach, and the critic-composer François-Joseph Fétis, venerable director of the city’s Conservatoire. Cavaillé-Coll took an active interest in Widor’s career, garnering the support of Saint-Saëns and Gounod to influence the young man’s ‘provisional’ Paris appointment in January 1870 as master of the loft in Saint-Sulpice (succeeding Lefébure-Wely, official organist to the Second Empire), a position he was to remain in for over 60 years. In December 1890 he inherited Franck’s organ chair at the Paris Conservatoire, six years later succeeding Théodore Dubois as professor of composition. His many pupils included Marcel Dupré (his successor at Saint-Sulpice), Tournemire, Vierne, Albert Schweitzer, Honegger and Milhaud.

Creator of the French Romantic tracker-action organ, Cavaillé-Coll (1811-99) provided composers with an ennobling medium. His grand edifices commanded the spaces of Notre Dame, La Madeleine (where Saint-Saëns was incumbent), Saint-Clotilde (Franck likewise), La Trinité (Guilmant) and the Trocadéro. Their pipes crowned the great abbeys and cathedrals from Lyon and Bayeux to Orleans and Rouen. In 1862 his ‘magnum opus of 100 stops’, 19 combination pedals, and five manuals was installed in Saint-Sulpice, inaugurated by Saint-Saëns. This was the instrument, with its many voices, colours and harmonic overtones, its gradation and immensity of volume, which was to directly inspire Widor. ‘It’s when I felt the six-thousand pipes of the Saint-Sulpice organ vibrating under my hands and feet,’ he recalled, ‘that I took to writing my first four organ symphonies […] I didn’t seek any particular style or form. I wrote feeling them deeply, asking myself if they were inspired by Bach or Mendelssohn. No! I was listening to the sonorousness of Saint-Sulpice, and naturally I sought to extract from it a musical fabric – trying to make pieces that, while being free, featured some contrapuntal procedures’ (Souvenirs autobiographiques, typescript 1935-36). In Saint-Sulpice, ‘dominating some 20 meters above the nave that extended in front of the gigantic instrument, Widor was king. He reigned, and he had his court of musicians, the faithful, friends, and the inquisitive’ (René Dumesnil, Portraits de musiciens français, Paris 1938). Walk into Saint-Sulpice today, arrondissement VI, his spirit and name is everywhere still. Look aloft, become part of the anima and ambience of the place, and you know why he imagined and wrote as he did.

Widor wasn’t the first Romantic to conceive a ‘symphony’ for solo instrument, his fellow Parisian Alkan having published one for piano in 1857 (Nos 4-7 of the minor key Études Op 39, dedicated to Fétis). But he emphatically established the genre for organ, using the instrument’s resources to create a spectacular ‘orchestral’ palette, hewn as much out of Berlioz (whose Traité d’instrumentation he modernised in 1904) as the ‘thoroughly orchestral’ precedent of Mendelssohn’s Fourth Sonata (which he edited in 1918). Mirroring the fact that, High Catholic bureaucratic position notwithstanding, their author was no avid church man, the first eight of his ten belle époque symphonies (two sets of four each: Op 13, 1871, Op 42, 1878-87, variously revised subsequently), are essentially secularised concert suites. Only the last two—the Symphonie gothique, Op 70 (1894) and Symphonie romane, Op 73 (1899), inspired by the Cavaillé-Colls in Saint-Ouen, Rouen, inaugurated by Widor in 1890, and Saint-Sernin, Toulouse, dedicated by Guilmant in 1889—instil specifically liturgical elements (pre-Solesmesised Gregorian plainchant). Tracing a rising ‘C scale’ of keys (C minor, D major, E minor, F minor; F minor, G minor, A minor, B major; C minor; D major), Widor’s symphonies are a unique phenomenon, their legacy the gentlemanly preserve of the French Establishment—notably Vierne at Notre Dame (who completed the last of his six in 1930), Guilmant, Barié, Dupré, Fleury (who effectively brought the genre to an end with his Second in 1949). These days, cleansed of sentimentality and gratuitous sanctity, the purple and the pompous that once cloaked them, observed for their precision detail and scoring, they tower on their own—sonically particular, transcendentally exacting, cogently argued distillations of a special aesthetic, time and place in European history.

The F minor Fifth (1879) and earlier G minor Sixth (1878) open the Op 42 quartet, dedicated to Auguste Wolff. Each majesterially refute Paul Henry Láng’s damning 1941 view that Widor’s “symphonies for organ” are merely the ‘contrapuntally belaboured products of a flat and scant musical imagination, the bastard nature of which is evident from the title alone’; that their ‘creative force springs more from the technical than from the spiritual’. Whether or not Schweitzer was entirely correct to say that the Fifth ‘deserts’ the path of its predecessors, ‘the lyric withdraws’ (1951), is arguable. Certainly, along with No 6 (7 and 8 too), its slow counterfoiling content, the ‘mouvement lent ou modéré à la Mendelssohn’ element (François Sabatier, 1991), would appear to continue rather than abandon earlier traits. Progressiveness, though, there most certainly is—what Schweitzer calls that ‘something else [striving] to take form’. Widor’s modern editor and biographer, John R Near, opines that ‘the [“signature work”] Fifth and [“astounding”, “innovative”] Sixth Symphonies show the composer in full control of his craft, and thus provide a pivotal point to mark the transition to Widor’s second creative period […] Still in his mid-thirties […] mature and successful [a man of “distinct musical personality”] working in large forms’.

One of several starry celebrants to inaugurate Paris’s first concert organ (moved since to the Auditorium Maurice Ravel in Lyon), Widor premiered No 6, billed as ‘5e Symphonie’, at the Palais du Trocadéro, 24 August 1878. ‘The performing talent of this artist […] is of the most brilliant sort. M[onsieur] Widor is skilled in execution, and there is scarcely a difficulty that stops him,’ reported the Revue et Gazette. The hallowed B major Adagio and chattering staccato Intermezzo (G minor/E flat) particularly impressed. The one for its ‘gracious’ character and ‘descending semitones’ recalling Wagner; the other for its ‘brilliant’ manner, albeit ‘written rather for the piano than for the organ’. What was thought of the tonally remote D flat major Cantabile, with its quartet-like texture and balanced part-writing, is not recorded. The work follows a quinquepartite plan, heroic ‘sonata’ powered columns enclosing a gentler quasi-Brahmsian tapestry—architecture versus cameo. These flanking movements, in rhetorical minor and exultant major respectively, traverse Jovian vistas, Widor contesting, dramatising and ‘orchestrating’ ideas with all the skill, splendour and fff voice of a rampant field commander. Not for small places or shy instruments.

By the grace of its abundant inspiration […] the preferred symphony with the public’ (Ménestrel, 1889), the epic Fifth similarly divides into five parts, with a reflective, suggestively terpsichorean inner core, comprising an impeccably gauged Allegro cantabile, a fantastical, whimsical A flat Andantino quasi Allegretto, and a C major Adagio. Contrasting the Sixth, however, variation procedure replaces sonata discipline. Self-evidently so in the opening Allegro vivace—a bronzed, lithe theme leading the way. And indirectly in the falling/rising step sequences of the closing maggiore Toccata—a fabled ‘wedding’ allegro of simple yet ingenious tonal patterning, thunderous climax, inexorable foot-work, and unremitting manual dexterity (the sextuplet semiquavers of the right-hand calling for high-velocity staccato articulation). The first ascertainable public performance was given by Widor in Lyon on 16 December 1880, inaugurating Cavaillé-Coll’s new organ in Saint-François-de-Sales. From this fact, a handful of truncated Paris outings in 1879—at Saint-François-Xavier (27 February, first movement) and the Trocadéro—and the internal evidence of the score, Near reasons interestingly that the Fifth may have been composed ‘with an instrument other than Saint-Sulpice in mind’—just as the Sixth had been intended for elsewhere (the 1878 Exposition Universelle). ‘Several passages equire an expressive Positif division—something that the Saint-Sulpice organ did not have, but which Saint-François-Xavier [built by Fermis & Persil], Saint-François-de-Sales and the Trocadéro instruments included.’