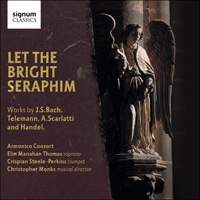 The Armonico Consort returns to Signum (following a highly regarded Naked Byrd series) with a new album celebrating the glorious combination of soprano and trumpet in baroque music featuring the soaring talents of Elin Manahan Thomas and Crispian Steele-Perkins.

'As you might just guess from its title Let The Bright Seraphim, and the billed soloists soprano Elin Manahan Thomas and trumpeter Crispian Steele-Perkins, it’s a celebration of highlights by Bach, Telemann, Scarlatti and Handel for the valveless baroque trumpet on which Steele-Perkins is an acknowledged master, and the way it can work to such fine effect with a shiny soprano solo … the whole thing seems suffused with light reflected from Manahan Thomas’ voice, and Steele-Perkins’ effortlessly projected trumpet' (BBC Radio 3 CD Review)» More
'The Armonico Consort follow up their dazzling second volume of Naked Byrd acappella pieces with this programme of baroque works for trumpet, soprano and chamber ensemble. The tone is immediately set by Crispian Steele-Perkins' trilling trumpet on Bach's Jauchzet Gott in alien Landen, which also features quite thrilling counterpoints between him and soprano Elin Manahan Thomas. Alessandro Scarlatti's pairing of voice and trumpet brings added nobility to the expression of unrequited love in Su le sponde del Tebro, though its most affecting passage is Infelici miei lumi, where Thomas's heartbreaking vocal is borne on a haunting meniscus of strings' (The Independent)

Bach, Telemann, Alessandro Scarlatti (father of Domenico Scarlatti) and Handel were arguably the four greatest composers of their time, and all of them wrote superbly, and in their own ways, for the trumpet—not the modern valved trumpet, but the longer, valve-less Baroque trumpet, ingeniously disguising the instrument’s very limited range, which was confined to its harmonic series in (with very few exceptions) the keys of D and C. This programme eloquently demonstrates how in their hands the instrument could be festive, dramatic or deeply expressive as an adjunct both to solo voices and to the Baroque orchestra.

J S Bach’s solo cantata Jauchzet Gott in allen Landen, BWV51, for the combination of soprano, trumpet, strings and continuo, is believed to have been composed in about 1730, by which time the composer had been Kantor of the Thomaskirche in Leipzig for about seven years. Though it was intended for the 15th Sunday after Trinity, the text—which is possibly Bach’s own literary effort—does not correspond closely to appointed readings for that Sunday, which are concerned with vanity and faithlessness; and Bach added the qualification ‘et in ogni tempo’, indicating the work could, in fact, be performed at any time.

Cantata 51 follows the traditional chorale cantata pattern. The first movement is a brilliant da capo aria, in ritornello form, that features bravura passage-work for the singer and the trumpeter, often in virtuoso counterpoint that ranks among Bach’s most original writing for a voice with an obbligato instrument. The recitative second movement opens with a serene chordal accompaniment in the upper strings over a bass ostinato. The soprano’s part, at first restrained and mostly syllabic, becomes much more ornate as it develops. There is a notable example of Bach’s word-painting at the word ‘lallen’, set to a long-drawn-out, rather jagged melisma. The ensuing aria, in a flowing 12/8 rhythm, is under-girded by a mainly stepwise bass line that gives the impression of aspiring continually upwards. The soprano’s elaborate, wide-ranging melodic line perfectly complements the prayer for God to bestow his mercies each day.

The last movement opens with a violin duet, against which the soprano enunciates the chorale melody ‘Nun Lob’, mein Seel’, den Herren’. There are joyful, extended ritornello sections, making much use of instrumental imitation. The movement, and the work, culminates in a blissful setting of ‘Alleluia’ in which the trumpet rejoins the soprano for a display of spiritual virtuosity that has often been rated the finest ‘Alleluia’ setting before that in Mozart’s Exsultate, Jubilate.

Though Bach was an enormously prolific composer, he—and just about everyone else—was outdone in this regard by his contemporary Georg Philipp Telemann, whose total of works runs into the thousands. Telemann is known to have composed several concertos using the trumpet: there is one for trumpet and 2 oboes, another for trumpet and violin, and at least two for 3 trumpets. As far as I am aware, however, he wrote only one concerto in which a single trumpet is the sole soloist, namely the Trumpet Concerto in D major for trumpet, violins, and basso continuo. In fact very few other trumpet concerti by German composers are known from this period, and it is possible that Telemann’s is among the first of them to use this title, though essentially this is work in the Italianate sonata da chiesa (Church Sonata) form. Though its exact date is not known, this sparkling work dates from somewhere in the period 1710-1720, so most probably while Telemann was City Director of Music in Frankfurt, a post he occupied from 1712 to 1721. The sonata da chiesa customarily has four movements arranged in a slow-fast-slow-fast pattern, and this is the case here. Telemann makes extraordinary demands on the trumpet soloist: the part requires exceptional control of breathing and embouchure. As Crispian Steele-Perkins has commented: ‘What is remarkable is that Telemann must have known a player capable of playing this upon a 7 foot 8 inch piece of pipe’.

The trumpet is certainly the focus of attention in the opening Adagio, but here it is its expressive and sonorous qualities that come to the fore. In the following Allegro, the interest is more equably divided between the violins and the trumpet, while in the Grave third movement, in B minor, the trumpeter is allowed a rest and the expressive phrases are unfolded just by violins and continuo. It is the Allegro finale that really puts the trumpet through its paces, in a bright, joyous conclusion to a concise but entertaining piece.

Su le sponde del Tebro (On the Banks of the Tiber) is one of possibly 800 solo chamber cantatas that Alessandro Scarlatti, one of the greatest masters of that early Baroque genre, composed during his career. Such works were commissioned by the aristocracy and plutocracy of Italy for performance at their houses to entertain guests or for special occasions. They were also performed at conversazioni or academies: gatherings of the nobility with their friends. Though most of Scarlatti’s cantatas have little to suggest a precise dating, this one (one of the more remarkable, precisely because of the trumpet obbligato) is believed to have been written between 1690 and 1695, during his 20-year sojourn as maestro di cappella to the royal court of Naples.

The general character of Su le sponde del Tebro is pastoral, exploring the conventional situation of an unrequited love. The text and the form of the cantata, which derives ultimately from the madrigals of Monteverdi, are shaped by narrative passages interspersed with the pathetic recitatives and arias of the lovelorn Aminto. Thus impersonal narration contrasts with lyrically-expressed, human emotion. The arias are designed to contrast and complement one another both emotionally and musically. Scarlatti uses a trumpet as an obbligato instrument and in duo textures with the voice. After the orchestral sinfonia, and the scene-setting recitative, the opening aria features a trumpet obbligato with a vocal part that imitates the trumpet themes. Probably the most remarkable movement in the cantata is ‘Infelice miei lumi’, designated an ‘arioso’ because of its free form: this is rich in chromaticism, suspensions, and diminished-seventh chords as Aminto gives voice to his grief. ‘Dite almeno’ is an aria written over an ostinato bass, and highly inventive rhythmically. Another brief narration precedes the final aria, in which the trumpet comes into its own as a martial and heroic instrument, its triumphal music expressing Aminto’s resolve to endure.

The pleasant parklands of Vauxhall Gardens, with their stages and pavilions, formed one of the leading venues for public entertainment in 18th-century London. Tightrope walkers, hot-air balloon ascents, concerts and fireworks provided amusement, and in their musical capacity the Gardens were most closely associated with George Frideric Handel, whose statue (now to be seen in London’s Victoria and Albert Museum) stood within the grounds. Crispian Steele-Perkins has accordingly given the collection of nine disparate Handel pieces in this programme the overall title ‘Music for the Vauxhall Gardens’ as examples of music that might at any time have been heard there. The first four pieces, extracted from one oratorio and three operas, are the famous marches from Judas Maccabeus and Scipione, a Sinfonia from Floridante and a ‘Lentement’ from Handel’s last opera Deidamia. Crispian Steele-Perkins says he has compiled them ‘in the syle of Walsh’s ‘Musica Bellicosa’ published in various guises throughout the 18th century, probably for mainly (but not exclusively) instructional use. These usually comprise two part books, one containing the melodies (Treble) and the other the Bass (sometimes figures).The Alto and Tenor parts are either missing or require composing/editing. The two marches are transposed from the horn key of G to the trumpet key of D…but harmonies have been taken from later rather than original versions’.

The aria with trumpet ‘Eternal Source of Light Divine’, here sung by soprano (but originally composed for the unusually high tenor voice of Richard Elford) comes from Handel’s 1713 Birthday Ode for Queen Anne, probably his first royal commission. Like his Utrecht Te Deum completed shortly before, it shows Handel imitating the style of Purcell, well-loved by the two queens, Mary and Anne—and Elford himself had sung for Purcell.

The three pieces of Water Music are in fact probably not all by Handel, though the concluding Hornpipe, which survives in various forms, certainly is. Steele-Perkins believes that the Overture and Air, which come from the ‘Famous Water Piece’, a five-movement suite in D major for trumpet, strings and continuo ascribed to Handel in a manuscript in Cambridge’s Pendlebury Library, may in fact be the work of the trumpeter, flautist and composer John Baptist Grano (c1692-c1748), who worked with Handel at the opera house in London’s Haymarket.

Finally one of the most famous of all ‘trumpet arias’, namely the joyous ‘Let the Bright Seraphim’ from the oratorio Samson. It makes a fitting finale to a programme devoted to the harmonious interplay of trumpet and voice.