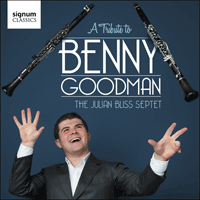 A Tribute to Benny Goodman

Recreating the exciting sound of swing from the 30's and 40's, Julian Bliss’s dynamic virtuosity leads his sextet through some of the great tunes of the swing era, staying true to the authentic feel but naturally with a modern twist.

Julian Bliss says 'I decided in the summer of 2010 that I wanted to start my own Jazz group. I enlisted the help of Neal Thornton (Piano) to help make this dream a reality. We spent months listening to every version of each tune we could find, and putting together our own versions while still being mindful of the light and fun feel Goodman captured all those years ago. We then had the task of putting the rest of the band together. We were specifically looking for musicians that had a great interest in the Swing era, and I must say we couldn’t have picked a better set of players'

'Bliss places his own distinctive stamp on the familiar tunes and on at least two of the tracks his classical training adds to the performance … all in all this is a very good jazz debut album from a very talented musician, ably supported. He's someone to watch in the future and on this evidence highly recommended' (Jazz Journal)» More

'Great Britain's Julian Bliss is a renowned classical clarinetist … unlike many classical musicians, Bliss is capable of swinging mightily and adapting his formidable technique to the task at hand. He, Thornton, Hart, and Oxley certainly invoke memories of Goodman, Teddy Wilson, Lionel Hampton, and Charlie Christian, respectively, as one listens to these fresh and vital interpretations of tunes associated with Goodman' (Jazztimes)» More

For a kid who liked jazz, Chicago was a great town to grow up in. Musicians had begun working their way north from New Orleans about the turn of the century, and by the early 1920s giants like “Jellyroll” Morton, Sidney Bechet, “King” Oliver and Louis Armstrong were playing in Chicago and making history. Kids who paid attention to this development were going to make history themselves in a few more years—Bud Freeman, Davie Tough, Eddie Condon, Milt Mesirow (Mezz Mezzrow), Gene Krupa, “Muggsy” Spanier, Jimmy McPartland, Jess Stacy—and a kid in short pants who played the clarinet.

Benny Goodman was only 10 when he first picked up a clarinet. Only a year or so later he was doing Ted Lewis imitations for pocket money. At 14 he was in a band that featured the legendary Bix Beiderbecke. By the time he was 16 he was recognized as a “comer” as far away as the west coast and was asked to join a California-based band led by another Chicago boy, Ben Pollack. Goodman played with Pollack’s band for the next four years. His earliest recording was made with Pollack, but he was also recording under his own name in Chicago and New York, where the band had migrated from the west coast. In 1929, when he was just 20, Benny struck out on his own to become a typical New York freelance musician, playing studio dates, leading a pit orchestra, making himself a seasoned professional.

By 1934 he was seasoned enough to be ready for his first big break. He heard that Billy Rose needed a band for his new theatre restaurant, the Music Hall, and he got together a group of musicians who shared his enthusiasm for jazz. They auditioned and got the job. Then Benny heard that NBC was looking for three bands to rotate on a new Saturday night broadcast to be called “Let’s Dance”, a phrase that has been associated with the Goodman band ever since. One band on the show was to be sweet, one Latin, and the third hot. The Goodman band was hot enough to get the job, but not hot enough to satisfy Benny. He brought in Gene Krupa on drums. Fletcher Henderson began writing the arrangements—arrangements that still sound fresh more than a half century later. And the band rehearsed endlessly to achieve the precise tempos, section playing and phrasing that ushered in a new era in American music. There was only one word that could describe this band’s style adequately: Swing.

After six months of broadcasting coast to coast the band was ready for a cross-country tour. The band was ready but the country was not. The tour was a disaster until its last date in August, 1935, at the Palomar Ballroom in Los Angeles. The only plausible explanation for what happened there is that “Let’s Dance” was aired three hours earlier on the west coast than in the east. The kids in Los Angeles had been listening, and thousands of them turned out to hear the band in person at the Palomar. They hadn’t even come to dance; instead they crowded around the bandstand just to listen. It was a new kind of music with a new kind of audience, and their meeting at the Palomar made national headlines. When the band headed east again, after nearly two months at the Palomar, they were famous. They played for seven months at the Congress Hotel in Chicago, where Teddy Wilson joined them to complete the Benny Goodman Trio. Back in New York Lionel Hampton made it the Benny Goodman Quartet, and the band was a sensation at the Hotel Pennsylvania’s Madhattan Room.

The band made it even bigger at the Paramount Theatre, where lines began forming at breakfast time and continued through the last daily show. It was grueling for the kids who waited for hours to dance in the aisles. It was more grueling for the band; they returned each night to the Madhattan Room for still more swing. At the age of 28 Benny Goodman had reached what seemed to be the pinnacle of success. The new radio program, “The Camel Caravan”, was scheduled in prime time, and the whole nation listened not only to the band itself but to the intelligent commentary by some of the most influential critics of the day, including Clifton Fadiman and Robert Benchley.

But it was not quite the pinnacle. On January 16, 1938, Sol Hurok, the most prestigious impresario in America, booked the Benny Goodman band into Carnegie Hall. For generations Carnegie Hall had been the nation’s greatest temple of musical art, home of the New York Philharmonic and scene of every important artist’s debut (even if they had played in a hundred other concert halls first). So this was a debut not only for Benny Goodman but for jazz. Though many others followed him to Carnegie Hall, there has never been another concert with such an impact. It even made his “classical” Carnegie Hall debut more newsworthy a few years later when Benny returned there to launch his second career, as a soloist with major symphony orchestras and chamber groups.

Benny Goodman was indisputably the King of Swing—the title was invented by Gene Krupa—and he reigned as such thereafter until his death in 1986 at age 77. Over the years he played with the greatest figures in jazz: Bix Beiderbecke, Louis Armstrong, Billie Holiday, Ella Fitzgerald, Count Basie, Mildred Bailey, Bessie Smith and countless others. Many of those who played with him as sidemen later achieved fame as leaders of their own bands, as soloists, or even as movie or TV actors—Harry James, Ziggy Elman, Gene Krupa and Lionel Hampton to name a few. A list of Benny’s hits would fill a book. In fact it filled several books by his devoted discographer/biographer Russ Connor.

That crowded career, spanning more than six decades, had an almost unparalleled impact on popular music and the importance of the clarinet in both jazz and classical music. Thousands of youngsters throughout the world were influenced to play the clarinet through listening to Benny Goodman’s recordings and live performances, and the style of those who turned to jazz was universally patterned after what they heard Benny play, whether or not they realized it. The popularity of the “big band” format is another of the legacies of this musical giant.

When you’re a seven-year-old boy on your first trip to New York City, a relentlessly exciting destination, even for an adult—there are perhaps more obvious souvenir choices than a copy of Benny Goodman’s greatest hits. But it fascinated me. As a classical clarinetist in the making—learning the ins and outs of stage etiquette and composure, I couldn’t help but stare at that man on the front cover, reeling back, clarinet in the air, grin on his face; breaking all the rules. By bedtime, I had heard every track—and I was hooked.

14 years later, a cracked, dusty CD case found its way back onto my desk. It was Benny—still reeling back, still grinning, still swinging. That was all I needed. Within days I found Neal, someone who was as enthralled with Goodman as I was—and that was it. Within weeks we had a band. Within months we were recording an album; a collection of Benny’s greatest hits. And here it is.

That wide-eyed seven-year-old boy on his first trip to the big apple? What I wouldn’t give to show him this…
(Julian Bliss)

About 18 months ago a bright and energetic young man came to see me suggesting we might collaborate on a project performing the music of Benny Goodman. A strange throwback to my own early years when I’d been a classical clarinet player who outraged my headmaster at school by being the first person to play non-classical music at an end-of-year concert when I played a Goodman transcription. The life coincidence seemed too good and Julian looked like an enthusiastic and straightforward guy to work with so the project was born on a handshake between us.

Over the next few months we listened to hundreds of tracks of Goodman and many others playing the great music of their time and had a ball getting to know the style whilst soaking up the good time energy of the swing era. I learned a lot of new tunes and grew to really respect the apparently effortless virtuosity and ensemble playing of these great musicians.

We knew we wanted to focus on the small group sound and so concentrated on the Sextet recordings, but you can’t really pay tribute to Goodman without some big band tunes so we hit on forming a group which included trumpet as well as the classic Goodman sextet lineup of clarinet, guitar, vibes and rhythm section.

We eventually narrowed down the choice of songs to a group of about 20 which we felt would make a good evening’s concert and the majority of them are here on this album. We’ve had such fun researching, preparing and performing this material. I hope that comes out in these recordings as it surely does when we get the chance to perform these songs live.