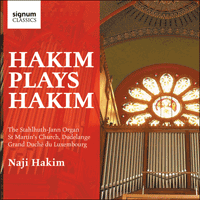 Naji Hakim returns to disc on Signum with a new release of his own unique compositions for solo organ—performed on the magnificent Stahlhuth-Jann Organ of St Martin’s Church, Dudelange, Grand Duché du Luxembourg.

'In 1993, Hakim succeeded Messiaen as organist of La Trinite in Paris, and served in that position for 15 years. Like Messiaen, too, Hakim 's music often has a religious emanation, albeit more widely cast than Messiaen's (or MacMillan's) Catholicism, and on this album we find excellent examples of the nature of Hakim's inspiration which (of course) lies at the heart of his music' (International Record Review)» More

This organ fantasy develops several themes from Johann Sebastian Bach’s works. The succession of motives inspires different metrical, contrapuntal or expressive textures generating a rhapsodic form. The royal theme from the Musical Offering followed by a fugal development of Kyrie II from the B Minor Mass appear in the middle of the structrure as climaxes to this homage. World premiere performed by Naji Hakim, St Nikolaus, Frankfurt am Main, 21 March 2004.

So teach me, Lord, to follow your way
in using the pound I was granted
to fill up my day with honest work
to help and protect the weak,
to love, for that is life.
And give me at last
a name, Lord Christ,
inscribed in your book of life!
(C.R. Sundell 1934, K.L. Aastrup 1945
Den Danske Salmebog No 728 vers 4)

The middle movement, Allegro vivace, is a very joyful toccata on the hymn Min Jesus, lad mit hjerte få (My Jesus, let my heart receive), text by Biørn Christian Lund (1764) and N.F.S. Grundtvig (1846). Carl Nielsen composed the melody for this hymn in 1914. This melody inspired the variations of the third movement of his Wind Quintet Op 43 in 1922.

The solemn Maestoso concludes this Easter triptych on Se, nu stiger solen (See, now the sun rises), text by Jakob Knudsen (1891) and melody by Oluf Ring (around 1915). The character of this melody puts in relief the keywords of the hymn: solopgang (sunrise) and opstandelse (resurrection). World premiere performed by Naji Hakim, St Vitus, Visbek, 11 June 2010.

God is in the midst of her; she shall not be moved:
God shall help her, and that right early.

Mit seinem Geist (With his spirit) is based on the chorale ‘Ein’ feste Burg ist unser Gott’ by Martin Luther and Psalm 46, and develops a set of eight variations:

1. The opening movement bursts in with a toccata-like texture with overflowing joy.
2. Variation II is an expressive ornamentation of the melody in the treble.
3. Variation III is a harmonisation of the choral accompanied by a perpetuum mobile in the left hand, symbolising the ’stream’ evoked in Psalm. 46, 5.
4. The image of the stream is recalled in variation IV, with a gracefully flowing development of the melody.
5. Variation V is a peaceful meditation with the melody in the left hand.
6. By contrast the very lively variation VI figures, with its abundant arpeggios, an ‘inextinguishable strong stream’; it culminates on a bright carillon radiant with joy.
7. Variation VII is a contemplative choral harmonisation. The conclusive variation recalls the opening with its cheerful and dancing character.

In his organ works, Naji Hakim often draws his thematic material from the gregorian chant, treasures of the Roman Catholic Church, situated in the spirit of Vatican II. This paraphrase of the antiphon to the virgin, Salve Regina, is based on the plainsong theme (solemn tone). The gregorian line is unchanged; it evolves slowly above an expressive harmony. The text of the prayer is underlined by the meditative, soft and peaceful character.

Gershwinesca (2000)
Gershwinesca was written in answer to the commission of the English piano and organ virtuoso, Wayne Marshall. The rhapsodic piece pays a tribute from beyond the oceans to George Gershwin, by recalling, in a witty and humorous rondo form, several themes of the great American symphonic-jazz composer.

The three-manual organ of 1912 had 45 stops (and 3 transmissions under expression in the pedal) on cone-valve chests with pneumatic note and stop action. Wind was supplied by three English water engines. A further borrowing from English organbuilding was the high-pressure Tuba mirabilis 8‘ in the Positiv-Swell division, voiced on 300 mm. Typical French features were the overblowing stops (typical of Stahlhuth’s organs) and the reeds of French-style construction (with tin-plated shallots), of which at least three were supplied by the Paris firm Veuve Jules Sézerie: Vox humana 8’, Tuba 8’ and Posaune 16’ ‘octave grave de bombarde 16’, grosse taille’. Basically, however, the organ was attuned to a German romantic style, with plentiful foundation 8‘-stops, differentiation in the manuals according to the various scalings (wide, normal, narrow) and their dynamic gradation (f, mf, p). Besides the high-pressure Tuba mirabilis, the organ had two further ‘Starkton-Register’ (strong and expressive in tonal design): Seraphon Gedackt 8‘ and Seraphon Flöte 8‘, each with two mouths. With these three loud toned stops, the numerous foundation stops and the two expressive divisions with their sub and superoctave couplers, the organ had an exceptionally broad dynamic spectrum.

In 1962, in accordance with the then predominant neobaroque tonal aesthetic, the organ suffered far reaching modifications in total negligence of its stylistic specificity: reduction of the wind pressure, replacement of the pneumatic action by electric action, removal of the original console, changes to the pipework, transfer of stops onto other windchests, addition of high-pitched mixtures and mutations, as well as a fourth manual of neobaroque conception and removal of characteristic Stahlhuth stops.

• restoration and reconstruction of the Stahlhuth pipes and windchests from 1912;
• renewal of the swell boxes and the wind supply system ;
• removal of the additonal stops from 1962 and reverse of the transfers carried out in 1962;
• addition of a Bombarde division in place of the neobaroque Positiv ;
• harmonious extension of the organ up to 78 speaking stops with both German romantic and French symphonic tone colors, notably by:
• further development of the string chorus (fullfledged chorus from 16’ through Terzgamba 1 3/5’)
• numerous orchestral solo stops, constructed and voiced in both German and French style;
• extension and differentiation of the numerous reed chorus (23 stops in all) of both German romantic and French symphonic style on all manuals;
• a strong fundamental tone based on 32’ (Untersatz 32’ from CC, full-length Contrabombarde 32’)
• octave mutations 5 1/3’ and 3 1/5’ and low-pitched, partly progressive mixtures;
• revoicing of the whole organ, carried out without compromise according to romantic voicing techniques;
• new four-manual console with electronic combination action, MIDI-interface and replay system.

Thus, since 2002, the organ has become an ideal instrument for the stylistically authentic performance of German, French and English repertoire from the romantic symphonic era.

* = restored or reconstructed stops from 1912