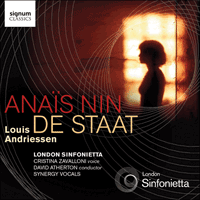 An exciting start to a new orchestral collaboration for Signum Records, this album is the first of a new series with the London Sinfonietta—one of the world’s elite contemporary music ensembles with a reputation built on the virtuosity of its performances and ambitious programming. This live recording brings together the UK premiere of Anaïs Nin, a new work for soprano and small ensemble, alongside his famed work De Staat.

Anaïs Nin is a monodrama based on the diaries of the same famed author, as well as those of her lovers (Antonin Artaud, René Allendy, Henry Miller and her own Father). A sometimes disturbing tale of desire and passion, Andriessen felt that the music should 'closely track the irony, despair and passion of this brilliant, many-sided woman'.

'Louis Andriessen has never shirked the big subjects,and here are two of the biggest: politics and sex. De Staat (1972-76) is a hard-hitting classic referencing Plato and Brecht in the struggle between 'pure' music and its social context. The recent Anais Nin is a monodrama for soprano (the superb Cristlna Zavalloni) and ensemble about the French-Cuban writer who had relationships with her father, the composer Joaquin Nin, and a raft of lovers. The use of 1930s scoring gives a Kurt Weill feel to the textures; the album misses the film fragments, but this is an excellent start to the London Sinfonletta's new series for Signum' (The Observer)
'Lou Reed and Metallica aren't the only ones delving into pre-war bohemian perversity: the Dutch minimalist Louis Andriessen offers a monodrama based on the diaries of Anaïs Nin, with the soprano Cristina Zavalloni recounting Nin's sexual liaisons with Antonin Artaud, René Allendy, Henry Miller and her own father. With clarinet and sax used to evoke jazz-era Paris, a cabaret- flavoured, sometimes comical Kurt Weill ambience captures the amorality and loneliness in Nin's writing. It is paired with Andriessen's most famous composition, De Staat, in which the vocal group Synergy offer ruminations on music from Plato's Republic, set to the reedy, methodical cycles of Andriessen's early minimalist style' (The Independent)

'Anais Nin, an intense sonic psychodrama for solo soprano and ensemble of eight musicians in which composer Louis Andriessen explores the life and especially loves of Nin, certainly puts Cristina Zavalloni's voice through its paces … De Staat explores the relationship between composition and politics, taking Plato's The Republic as its text. The braying chorale builds like the most gleeful of hyperdramatic soundtracks. Here, though, the effect is not that of a Bruckheimer epic—all faux emotion—but more the lusty avant-grandeur of the likes of Werner Herzog making an elliptical examination of the state' (MUSO)» More


“I await my father with deep joy and impatience. Tomorrow, tomorrow, begins another romance!” (Anaïs Nin)

Anaïs Nin is a monodrama, a musical stage play for one voice (Cristina Zavalloni), an ensemble of eight on-stage musicians, without conductor, and projected film fragments.

The voice, Anaïs Nin, sings of her love affair with her father, Joaquín Nin, whom she encounters again after 20 years’ absence, and of her lovers René Allendy, Antonin Artaud and Henry Miller. They are given expressive voice, both in the film clips and on tape, by the singer Hans Buhrs.

As the piece begins we see Anaïs Nin and Antonin Artaud taking a romantic walk. On the stage she sings of her ‘night of ecstasy’ with him. Anaïs Nin sings of her affair with her psychiatrist René Allendy, and of Artaud’s criticism of her behaviour. Artaud: “What have you done to Allendy? You have harmed him.”

Anaïs Nin then sings of her renewed encounter with her father (film clips). She isinterrupted by a furious Henry Miller, but continues the story of her relationship with Joaquín. After a dramatic climax, she fantasises in a letter to her father about a moment of great peace in which he is sitting on his bed. Later, in the room where Henry Miller is sleeping, Anaïs sings of her loneliness and her never-ending hunger.

As the piece ends, a 1930s’ gramophone recording of Joaquín Nin’s arrangement of a Basque Christmas carol is heard from the stage.

I knew about the father before I heard about the daughter because my father’s sheet music collection contained piano pieces and a volume of Spanish songs by the then famous pianist and composer Joaquín Nin. A few years later, during the sixties, an American diary author became famous, mainly because of her sexual frankness. After some research it emerged that she was the composer’s daughter. Much later still Irealised that she had had a love affair with her father.

After many years’ intensive collaboration with the Italian artist Cristina Zavalloni I realised that the role of Anaïs Nin would suit her very well. Meanwhile the volume of Anaïs’ diaries about her relationship with her father had been published unabridged in English under the title Incest.

A few years ago two of my best friends, Gerard Bouwhuis and Heleen Hulst, founded a new ensemble, Nieuw Amsterdams Peil (‘New Amsterdam Water Level’) with outstanding soloists who had decided to perform twentieth and twenty-first century music for small ensembles (up to 12 players) without a conductor. All this prepared the ground for me to compose Anaïs Nin. Reading the diaries from the years 1932 to 1934 I learned that this father was only one lover amongst several. This led to my decision to give three of them a stage role: the French film actor, poet and playwright Antonin Artaud; Henry Miller, the American alcoholic whom Anaïs Nin turned into a writer; and René Allendy. Under psycho-medical treatment himself, Artaud soon discovered Anaïs’ erotic hunger and advised her to consult his psychiatrist. Not long afterwards Allendy was added to Nin’s tally of lovers.

My choice of instruments was influenced by the era when the selected diary extracts were written, namely the early 1930s. This explains the use of saxophones, clarinets (Sidney Bechet, Coleman Hawkins) and percussion (drumset including a hi-hat and guiro). The music closely tracks the irony, despair and passion of this brilliant, many-sided woman.

De Staat (1972-76)
I wrote De Staat (The Republic) as a contribution to the discussion about the place of music in politics. To keep the issues straight it is necessary to differentiate between three aspects of the social phenomenon called music: 1. Its conception (devising and planning by the composer), 2. Its production (performance) and 3. Its consumption. Production and consumption are by definition if not political then at least social. The situation is more intricate when it comes to the actual composing. Many composers feel that the act of composing is 'suprasocial'. I don’t agree. How you arrange your musical material, what you do with it, the techniques you use, the instruments you score for, all of this is determined to a large extent by your own social circumstances, your education, environment and listening experience, and the availability—or non-availability—of symphony orchestras and government grants. The only point on which I agree with the liberal idealists is that abstract musical material—pitch, duration and rhythm—is suprasocial: it is part of nature. There is no such thing as a fascist dominant seventh. The moment the musical material is ordered, however, it becomes culture and, as such, a given social fact.

I decided to draw upon Plato to illustrate what I mean. Everyone sees the absurdity of Plato’s statement that the Mixolydian mode should be banned because of its damaging effect on the development of character. It is equally clear that he was confusing the issue in wanting to ban dulcimers and the craftsmen who made them from his ideal state. What he wished to ban was the social effect of the music played on them, something similar perhaps to the 'demoralising nature' of the Rolling Stones’ concerts.

My second reason for writing De Staat is in direct contradiction to the first. Perhaps I regret the fact that Plato was wrong: if only it were true that musical innovation represented a danger to the State! When Bertolt Brecht returned to Europe after the war he chose to settle in East Germany. The first play he wrote there was censored by the party. But Brecht said to the assembled Western journalists, 'In what Western country would the government take the time and trouble to spend thirty hours discussing my plays with me?'

De Staat has nothing to do with Greek music, except perhaps for the use of oboes and harps and for the fact that the entire work is based on tetrachords, groups of four notes, which also explains the scoring for the groups of four.

Just before the final choral section the orchestra splits into two identical halves, as announced earlier in the work. They play two melodies which sound like one because their rhythms are complementary (the performers play one after the other).

Polyrhythm is introduced for the first time in the coda following the choral finale, with the two orchestras each playing their own separate score. But this time they have the same melody, a canon. Finally, in the last bars, they attain the homophony introduced shortly after the opening choral section. I regard this as the major subject of the work.