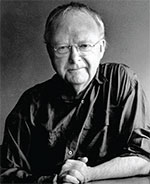 born: 1939
country: Netherlands
Andriessen was born in Utrecht in 1939 into a musical family: his father Hendrik, and his brother Jurriaan were established composers in their own right. Andriessen studied with his father and Kees van Baaren at the Hague Conservatory, and between 1962 and 1964 undertook further studies in Milan and Berlin with Luciano Berio. Since 1974 he has combined teaching with his work as a composer and pianist. He is now widely regarded as the leading composer working in the Netherlands today, and is a central figure in the international new music scene.

From a background of jazz and avant-garde composition, Andriessen has evolved a style employing elemental harmonic, melodic and rhythmic materials, heard in totally distinctive instrumentation. His acknowledged admiration for Stravinsky is illustrated by a parallel vigour, clarity of expression, and acute ear for colour. The range of Andriessen’s inspiration is wide, from the music of Charles Ives in Anachronie I, the art of Mondriaan in De Stijl, and medieval poetic visions in Hadewijch, to writings on shipbuilding and atomic theory in De Materie Part I. He has tackled complex creative issues, exploring the relation between music and politics in De Staat, the nature of time and velocity in De Tijd and De Snelheid, and questions of mortality in Trilogy of the Last Day.

Andriessen’s compositions have attracted many leading exponents of contemporary music, including the two Dutch groups named after his works De Volharding and Hoketus. Other eminent Dutch performers of his work include Asko|Schönberg, Nieuw Amsterdams Peil, the Schoenberg Quartet, pianists Gerard Bouwhuis and Cees van Zeeland, and conductors Reinbert de Leeuw and Lucas Vis. Groups outside the Netherlands who have commissioned or performed his works include the London Sinfonietta, San Francisco Symphony, BBC Symphony Orchestra, Kronos Quartet, Ensemble Modern, MusikFabrik, Icebreaker, the Bang on a Can All Stars, the California EAR Unit, and the Los Angeles Philharmonic.

Recent commissions include La Commedia, an operatic setting of Dante for Netherlands Opera premiered at the Holland Festival in June 2008 in a production by Hal Hartley, and The Hague Hacking premiered by the Labèque Sisters and the Los Angeles Philharmonic conducted by Esa-Pekka Salonen in January 2009. Louis Andriessen won the 2011 Grawemeyer Award for Music Composition for his opera La Commedia.