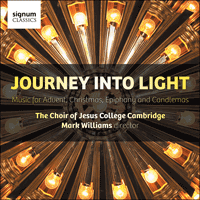 'This album provides a lovely programme of music. The Choir of Jesus College, Cambridge perform beautifully and the album contains a lot of wonderful rarities' (Classic FM)

Of the annual Christian seasons it is surely that from Advent to Epiphany which inspires believer and non-believer alike the most: the believer celebrates Christ’s birth whilst the non-believer considers hopes for rebirth and renewal as a New Year approaches. The feast of Candlemas which marks the end of the liturgical season of Christmas, celebrates the presentation of the infant Jesus to the old man Simeon, and is strongly associated with the gift of light. If aspirations surrounding the arrival of a new born child are universal, the Christmas music chosen here reflects the season’s inspiration through quite recent compositions, alongside musicfrom the early part of the 20th century.

Jesus Christ the apple tree: Elizabeth Poston was a composer, arranger, pianist and arts administrator. Her best-known compositions are based upon folk tunes, and her setting of Jesus Christ the apple tree (the author of the New England poem is unknown), spread her name across the English-speaking world. It is her most famous composition, admirably displaying her qualities as a sensitive creative figure.

We wait for thy loving kindness: Australian-born William McKie was better-known in Britain, his career culminating as Organist and Choirmaster at Westminster Abbey, where he is buried, and where he oversaw the music for the marriage of Princess Elizabeth and Lieutenant Philip Mountbatten in 1947 and for Queen Elizabeth II’s Coronation in 1953, in which year he was knighted. McKie composed much church music, including, for the 1947 Royal Wedding, the anthem We wait for thy loving-kindness, O God, to words selected by the Abbey’s Precentor. The work opens with a solo male voice, gradually building to an impressive climax.

I sing of a maiden: Patrick Hadley became a close friend and pupil of Vaughan Williams and colleague of many British composers. An excellent conductor and lecturer in music, Hadley’s shorter pieces—amongst several large-scale choral-orchestral works—especially the carol I sing of a maiden (1936, to traditional words), perfectly encapsulate his skill and originality.

Advent prose: The text of Judith Weir’s a cappella setting, anticipating the Messiah’s coming, is from the Book of Isaiah. The composer explains her piece ‘was written in 1983 and first performed by the Choir of Trinity College Cambridge’. Based on the mode i plainsong melody, the music swells from unison to eight-part harmony and back again.

There is no rose: Born in Cape Town, John Joubert has lived in England for many years, composing in many genres—operas, concertos, symphonies, chamber and much choral music. His choral works remain his best known, although he dislikes being ‘pigeon-holed’ as a composer. Joubert’s carol There is no rose of such virtue, Opus 14, written in 1954, continues to be among his most-often performed shorter works, a classic of the modern Christmas repertoire.

Hymn to the Virgin: Although Britten composed many works for voices, music for Christmas rarely appears amongst them. A Ceremony of Carols (treble voices and harp) is the best known, but in 1930, aged 16 and a pupil at Gresham’s School, he wrote this magical setting of an anonymous 14th-centurytext. It was slightly revised soon afterwards for two vocal groups—one large, one small—becoming one of the earliest works published during his lifetime.

Bright star carol: Vermont-born, long-time New York resident, Nico Muhly is set to become one of America’s leading 21st-century composers. A former boy chorister, much of Muhly’s work is choral, including notable music for Christmas, his commissions including a carol for Tewkesbury Abbey alongside this Advent carol for Jesus College, Cambridge, plus seven organ preludes for Westminster Abbey based on the great “O” Advent Antiphons.

In the bleak mid-winter: From 1916 Harold Darke was Organist of St Michael’s Cornhill for 50 years, initiating St Michael’s Lunchtime Organ Recitals, now the longest-running such series in the world. His setting of Christina Rossetti’s In the bleak mid-winter is one of those rare English carols to achieve transcendence. In 2008, it was voted the greatest carol of all time in a poll of choral experts and choirmasters.

Tomorrow shall be my dancing day: Manchester-born John Gardner lived for most of his life in the environs of London. A prolific composer in almost all genres, the carol Tomorrow shall be my dancing day, is Gardner’s most enduringly popular work. It was written for the Choir of St Paul’s Girls School where, as a successor of Herbert Howells and Gustav Holst, John Gardner was Director of Music in the 1960s, a post he held alongside teaching posts at Morley College and the Royal Academy of Music. A much-loved teacher, lecturer, composer and musician, he died just a few months after the recording of this disc was completed.

The Shepherd’s Carol: Bob Chilcott’s career began as a singer, and he became one of The King’s Singers. With such practical experience, his vocal writing is particularly fine, his many vocal compositions being welcomed by performers and audiences alike. The Shepherd’s Carol is an excellent example of his work; a simple tune, initially unaccompanied, it is woven into a rich vocal tapestry.

I saw three ships: Some claim this traditional English carol tune is a variant of Greensleeves; at least 500 years old, it exists in many arrangements, one of the most successful in recent decades being that by Simon Preston, who for several years was a successor to William McKie as Organist and Choirmaster at Westminster Abbey.

The little road to Bethlehem: Michael Head, a gifted singer, possessed a genuinely gentle creative gift. His output, whilst not especially large, is concentrated upon his distinguished song settings, of which the most famous and enduring example is The little road to Bethlehem. The words by Margaret Rose place the Nativity in any country: the result is deeply touching in its masterly combination of text and music.

Away in a manger: Kirkpatrick was born in Pennsylvania; although music played a dominant role throughout his life, he only became a full-time musician when he was 40, after which he composed many sacred pieces. Away in a manger appeared in 1885 and quickly achieved great popularity. The provenance of the words remains uncertain; it is sometimes claimed that the tune is a variant of an Austrian folk-song, yet in its familiar form it remains one of the most perfect of all carols.

Sir Christèmas: Ave Rex is a carol sequence by the Welsh-born William Mathias, written in 1969 for Cardiff’s Polyphonic Choir. Sir Christèmas, the fourth in the sequence, a wondrously energetic setting, stands aside from the religious aspect to concentrate upon more secular seasonal matters. Full of excited energy, as the realisation that Christ’s birth is upon us, the music grows superbly until the final shouts of ‘Nowell’, with which ‘Rex Pacificus’ has certainly arrived.

The Lamb: Sir John Tavener has written that The Lamb was composed in 1982 ‘for my then three-year old nephew, Simon. It was composed from seven notes in an afternoon. Blake’s child-like vision perhaps explains The Lamb’s great popularity in a world that is starved of this precious and sacred dimension in almost every aspect of life.’

Paean on ‘Divinum mysterium’: John Cook, Organ Scholar at Christ’s College, Cambridge, pursued a varied career prior to being appointed Organist and Choirmaster of Holy Trinity, Stratford-Upon-Avon, followed by a post at St Paul’s Cathedral, Ontario, and later still at the Church of the Advent in Boston, Massachusetts.

Epiphany: Judith Bingham won the 1997 BBC Young Composer Award and, as a former member of the BBC Singers, her music is often cited as displaying a natural understanding of the voice. Epiphany was written in response to a commission from the Dean and Chapter of Winchester Cathedral for the enthronement of Bishop Michael Scott-Joynt in January 1996. Keen to find a way of linking the season to the ceremony, Bingham focused on the sense of the Epiphany as a journey with its connotations for a new ministry. The composer wrote her own text ‘placing the journey of the Magi in an English winter landscape’ and building the sound from, in her own words, ‘the silent prayerful atmosphere of a full cathedral to the solemn grandeur of the bishop’s ascension’.

Here is the little door: Herbert Howells’s choral and organ music has long featured in the repertoire, his carols and short anthems ensuring his fame across the world. Howells was still composing in his 90s; this famous early carol, Here is the little door dates from his earliest period, published in 1918.

Nunc dimittis (1979): Geoffrey Burgon’s Nunc dimittis is exceptional in arising from incidental music for a television espionage series, ‘Tinker, Tailor, Soldier, Spy’, starring Sir Alec Guinness, which proved enormously successful in pop music terms. The music’s appeal stems from its combination of haunting melody and subtle harmonies—an original and memorable contribution to English church music. The text recounts the words sung by Simeon at the Presentation of Christ in the Temple, and is familiar as the second canticle sung in the office of Evensong.

Hymn to the Creator of Light: John Rutter read music at Clare College, Cambridge, where he sang in the choir. Director of Music at the College from 1975-79, he is among the most famous of living choral music composers. Hymn to the Creator of Light, for unaccompanied eight-part choir, was composed for the dedication of the Herbert Howells memorial window in Gloucester Cathedral in 1992.