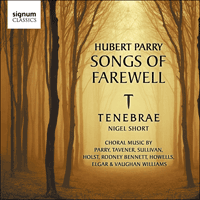 Following a string of five-star reviews for their previous albums of twentieth-century French choral music (Poulenc’s Figure Humaine—SIGCD197) and Renaissance polyphony (Victoria’s Requiem Mass—SIGCD248), the professional chamber-choir Tenebrae go from strength to strength with this new recording of British partsongs and choral music—centered on Hubert Parry’s Songs of Farewell.

Composed towards the end of Parry’s life, the Songs of Farewell have taken on something of an epithetical interpretation; they are almost a musical summation of his compositional life, reflecting Parry’s love of English renaissance madrigals and partsongs as much as the influence on his work from German composers like Brahms—made more complicated as these works were composed as the country (and its music) fell out of favour at the start of the Great War. This album also includes works by Tavener, Sullivan, Holst, Rodney Bennett, Howells, Elgar and Vaughan Williams.

'Parry's choral masterpieces, the six Songs of Farewell, composed between 1913 and 1915, represent a magnificent summation of his work as an English choral composer whose influence on several generations of native composers thereafter was immense. And this ravishing performance by Tenebrae, in the context of works by Elgar, Holst, Vaughan Williams, Harris and Howells, only serves to accentuate how deeply that influence was assimilated' (Gramophone)
'The Music Nigel Short's vocal ensemble Tenebrae continues its candlelit journey, after discs of Victoria's Requiem and Allegri's Miserere, with a programme of 15 brief English choral works … the Performance Tenebrae's intense, closely-mic'd sound is superbly balanced and textured; a soothing, uplifting antidote to our hectic lives' (Classic FM Magazine)» More
'Parry’s six unaccompanied motets are luminous setting sof texts by mainly seventeenth-century poets, reflecting his love of English renaissance madrigals and partsongs. The disc includes choral music by Vaughan Williams, Elgar, Holst, John Tavener and Richard Rodney Bennett—all performed with Tenebrae’s customary poise' (Financial Times)

Gustav Holst (1874–1934) composed The Evening Watch, subtitled ‘Dialogue between the Body and the Soul’ in 1924, and conducted its first performance at the 1925 Three Choirs Festival in Gloucester Cathedral. A setting of Henry Vaughan, it was planned as the first of a series of motets for unaccompanied double chorus, but only one other was composed. ‘The Body’ is represented by two solo voices, a tenor and an alto—singing in a metrically free, senza misura manner—and ‘The Soul’ by the full choir. The work has something of the austerity of Holst’s other works of this period, an impression intensified by his instruction that the voices should sing sempre pp until near the end; but the final efflorescence of passion and vocal colour feels all the more powerful for the previous restraint.

Sir Richard Rodney Bennett (1936–2012) composed A Good-Night, a setting of prose by the 17th-century writer Francis Quarles, in 1999 as his contribution to A Garland for Linda, a collaborative series of works written in memory of Linda McCartney (to which John Tavener also contributed). Bennett had known Linda McCartney, and this touching tribute is remarkable for its harmonic warmth and melodic simplicity.

Herbert Howells (1892–1983) composed his memorial anthem Take him, earth, for cherishing in late 1963 as a tribute to the assassinated President John F Kennedy, an event that had moved him deeply. The text, translated by Helen Waddell, is from a 4th-century poem by Aurelius Clemens Prudentius. There is a continual suggestion in the poem of a move or transition from Earth to Paradise, and Howells enacts this by the way his music moves from unison melody to very rich harmony. This deeply-felt work is among his finest shorter anthems, and was performed at Howells’s own funeral 20 years later.

Sir John Tavener’s (1944–2013) Funeral Ikos, which has become one of his best-known shorter works, was composed in 1981 and is a calm, even serene setting of words from the Greek Orthodox service for the Burial of Priests, evoking (rather like Elgar’s They are at rest) the bliss of the righteous in Paradise. In order to place the words at the forefront of the experience, the music is of extreme simplicity, much of it in unison or with only the most exiguous of harmonies. The chant is shared between upper and lower voices and then the full choir, and each verse ends with a spell-binding Alleluia.

Sir Charles Hubert Hastings Parry (1848–1918) has always been paid at least lip-service as one of the founding fathers of the English musical renaissance. For a long time, although his memory was kept green through such fine works as the choral song Jerusalem and the Coronation anthem I was glad, his large output of music was largely forgotten and unregarded. Recent years, however, have seen the beginning of a revaluation of Parry’s orchestral and choral works, foremost among which is his noble series of motets collectively entitled Songs of Farewell. Composed between 1913 and 1915, they are superbly written for unaccompanied voices; in their contrapuntal mastery and harmonic richness they must be ranked among the masterpieces of English choral music.

Probably the best-known of the motets is the first, ‘My soul, there is a country far beyond the stars’ a four-voice setting of words by the 17th-century metaphysical poet Henry Vaughan (1622–1695). The constant changes of rhythm and tempo make this beautiful piece quite a challenge; the rising phrases with which the work opens return at the end with a new strength and confidence. ‘I know my soul hath power’ sets two stanzas from Nosce Teipsum, a didactic poem on human knowledge by Sir John Davies (1569–1626). This is the simplest of the motets, almost entirely homophonic in style, but Parry makes it highly effective through his use of dramatic pauses and unexpected changes of chord and dynamics.

In the third motet, ‘Never weather-beaten sail’, the number of parts is increased to five by the addition of a mezzo-soprano line. From here on, each motet in the cycle has one more voice than the one that precedes it, building eventually to eight parts. For the charming poem by Thomas Campion (1567–1620) Parry also eschews the dramatic style of the first two motets in favour of a much more flowing, essentially lyrical approach. For ‘There is an old belief’, Parry chose words by the Scottish poet, novelist and biographer John Gibson Lockhart (1794–1854) which declare that a better world lies ‘beyond the sphere of Time and Sin, and Fate’s control’. Serenity is the distinguishing characteristic of this motet, expressed by Parry in a sonorous six-part polyphonic texture, changing to a unison reference to the plainsong of the Credo where the text mentions ‘that creed I fain would keep’, and the motet ends with majestic choral writing.

The last two motets are the most ambitious: the fifth sets John Donne’s (1572–1631) ‘At the round earth’s imagined corners’, a vision of the Last Judgement. Parry’s contrapuntal gifts are displayed at their finest in the monumental seven-part writing that evokes the fanfares of the angelic trumpets, the rising from the grave of the ‘numberless infinities of souls’, and the distress of the sinner who has repented too late.

The climax of the entire cycle, and the longest of the motets, is ‘Lord, let me know mine end’, a setting of verses from Psalm 39 for double choir. The two four-part (SATB) groups allowed Parry to compose antiphonal responses as well as very full eight-part harmony and very elaborate eight-part polyphony, as well as giving him a tremendously varied vocal palette from the leanest to the fullest textures. He took advantage of all these possibilities in a work that is a tour-de-force of a cappella technique. The final section, ‘O spare me a little’, has a wonderful luminous delicacy and poignancy that suggests that the composer, who by now was suffering from a serious heart condition, may have known he had less than three years to live.

Sir Edward Elgar (1857–1934) was not a Parry pupil, though he was a firm admirer. His name is closely associated with that of Cardinal Henry Newman (1801–1890) through his masterwork The Dream of Gerontius, which is a setting of Newman’s philosophical poem of that title. In 1909, Elgar turned again to Newman for the text of the partsong They are at rest (which he also titled ‘Elegy’), a commission from Sir Walter Parratt which was premiered at the Royal Mausoleum at Frogmore on 22 January 1910, the anniversary of the death of Queen Victoria. The words, from Newman’s poem ‘Waiting for the Morning’, evoke the souls of the blessed at rest in paradise, surrounded and protected by an angelic host; Elgar’s tender setting, which seems a little like an echo of Gerontius, aptly realizes the vision.

The two works here by Ralph Vaughan Williams (1872–1958), perhaps the greatest of Parry’s pupils, illustrate different aspects of his many-sided genius. At the beginning of his career he emerged first as a composer of songs and partsongs, and the mellifluous Rest is a very early work indeed: its performance at St James’s Hall, London on 14 May 1902 must have been one of the very first times that a work of his was heard in public. While Rest is an attempt to emulate the manner of the Elizabethan madrigal—a cause in which Vaughan Williams was deeply interested—he is even more firmly associated with the Folk Song Revival that did so much to revivify English music in the early years of the 20th century, and the beautiful setting of The turtle dove is one of his many folksong arrangements, made in 1919, here of a tune that Vaughan Williams had himself collected.

The long day closes has become the best-known of all the partsongs composed by Sir Arthur Sullivan (1842–1900). Composed to a poem by his friend Henry F Chorley, it was published in 1868 and quickly became successful with Victorian choral societies. The plaintively expressive harmonies with which Sullivan clothes the text’s gentle meditation on death have made this work a popular choice at funerals and memorial services. Sullivan’s beautiful partsong forms an appropriate introduction to a programme of English choral music that is largely concerned with acts of farewell, or mourning, or contemplation of the souls of the departed in Paradise. Central to the programme is the majestic succession of Parry’s Songs of Farewell, and most of the other composers represented here (apart from Elgar, Tavener and Bennett) were at one time or another Parry’s pupils at the Royal College of Music.

William Henry Harris (1883–1973) was one of the best-loved and most stalwart cathedral musicians of the first half of the 20th century. Professor of organ and harmony at the Royal College of Music from 1921 to 1955, he also became organist at St George’s Chapel, Windsor in 1933 and conducted for the Coronation services in 1937 and 1953. A famously efficient and inspiring choir-trainer, he wrote mainly Anglican church music, and his services and canticles are still in use. The anthem Bring us, O Lord God is a comparatively late work, dating from 1959, and setting a religious poem of John Donne that paints a radiant picture of heaven. Harris builds to a grand, resplendent climax but reserves his most mystical page for the concluding ‘Amens’ and their final cadence.