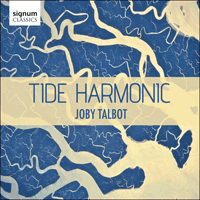 Tide Harmonic is a new work for small ensemble by the contemporary British composer Joby Talbot. With a compositional aesthetic that threads through his classical and concert works, this album was born out of a collaboration with choreographer Carolyn Carlson originally entitled Eau. A piece for small ensemble of string quartet, percussion, harp and keyboards (celesta, piano and harmonium), Tide Harmonic is described by its composer as: 'a kind of water symphony that, rather than constructing a poetic or narrative programme inspired by man’s relationship with water, instead focuses on the substance itself, the forces that act upon it, and the energy that flows through and from it'.

'The former Divine Comedian's latest project is an engrossing concept album about water, evoked in its various elemental states across a five-part suite bookended with a brief orchestral torrent supplanted by the resonant ringing of Tibetan temple bowls. In the opening Dew Point, these are augmented by harp, glockenspiel, vibes, piano and celeste, with strings seeping through eventually. Hadal Zone plumbs deeper, darker depths, with vibes and glockenspiel drifting down the scale over a steady bass monotone drone; and Algal Bloom pitches eerie strings against minimalist piano repetitions, before Confluence draws the various tributaries together' (The Independent)
'Joby Talbot's music is increasingly popular and its surface attractions help to explain why. His 2008 'water symphony', the 72-minute Tide Harmonic began existence as a dance score called Eau for a French production choreographed by the American, Carolyn Carlson. It was first performed in Lille in April 2008. This in turn generated the desire to record the work, which was duly carried out the following year' (MusicWeb International)» More

This is a piece about water. It is a journey through the physical properties, the processes and systems, of a substance that covers 70% of our planet’s surface and constitutes three-quarters of our own bodies.

Without water there can be no life. Uniquely, water is found naturally in all three common physical states—solid, liquid, and gas. At standard temperature and pressure it is in dynamic equilibrium between the liquid and gas states. Its solid state floats on top of its liquid form and reflects infrared radiation. As a liquid it has such exceptionally high surface tension that, through capillary action, it can defy the forces of gravity to travel up narrow tubes to treetops hundreds of feet above the ground. Oxygen dissolves in it. It warms the continents in winter and cools them in summer. It nourishes and cleanses us. It is the very reason life exists.

In Tide Harmonic I have attempted to create a kind of water symphony that, rather than constructing a poetic or narrative programme inspired by man’s relationship with water, instead focuses on the substance itself, the forces that act upon it, and the energy that flows through and from it.

After an initial downpour, Dew Point begins to slowly unfold in a relentless flowing trajectory. I imagined water vapour condensing as microscopic droplets of dew, coalescing and beginning to flow in ever broader channels to finally flood out as a great river into the sea. Hadal Zone considers the pressurised viscous frigidity of the ocean’s lightless depths, while Storm Surge is about wave energy—a musical representation of a storm at sea. Algal Bloom watches as the perfect balance of the global water system is disrupted and destroyed by mankind’s careless intervention. The music collapses in on itself before Confluence expresses hope for the future in water’s power to cleanse and heal.

Tide Harmonic started life as the score for Eau, a new piece of dance created by legendary American choreographer, Carolyn Carlson and the dancers of the Centre Chorégraphique National Roubaix Nord-Pas de Calais. Images and stage design were by the French cineaste Alain Fleischer, and the piece was first performed on 2 April 2008 at the Lille Opera House by the Orchestre National de Lille, conducted by Christopher Austin. The soloists at the premiere were Aïko Miyamoto and Christophe Maréchal (percussion), Anne Le Roy (harp) and Jeremy Holland-Smith and myself (keyboards).

The two weeks we spent in Lille were amazing—inspirational, terrifying, in turn frustrating and deeply fulfilling. We came away determined to try to capture the experience in a studio recording. This CD is the result, and I owe an enormous debt of gratitude to the many people who have helped this project come to fruition in the four years since I first sat down with Carolyn and heard her ideas for an evening of dance all about water. I should like to thank: Gill Graham and everyone at Chester Music; the great Carolyn Carlson herself; Yannick Marzin, her artistic producer, and all at CCN Roubaix; Christopher Austin, whose friendship and dedication to this music, both as conductor and chief orchestrator of the original version were a constant source of inspiration; Ben Foskett, Gavin Higgins and Nick Martin, who worked with Chris on those initial arrangements, and Richard Chester who reimagined the piece electronically for subsequent performances of the dance; Jeremy Holland-Smith with whom I collaborated on this chamber version, and whose friendship and beautiful playing helped make the Lille performances such an extraordinary experience; François Bou and the musicians and soloists of the Orchestre National De Lille; Chris Worsey, Rob Farrer, Manon Morris and all the musicians on this recording; Catherine Manners and David McLeery at Manners McDade Artist Management; Alison Burton and everyone at Air Lyndhurst Studios; Steve Long and Signum Records; and finally my wonderful family and friends who watered this music with their encouragement and love: Maurice, Claire, Jean, Charlotte, Luke, Jerry and Eos, and Liz. Thank you…