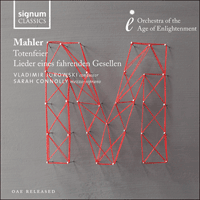 In this live recording from the Royal Festival Hall the OAE shines its musical torch into the realms of some later repertoire, shedding new light on the music of Mahler. Conducted by Principal Artist Vladimir Jurowski, this album includes the Lieder eines fahrenden Gesellen (Songs of a Wayfarer), written in the wake of an unhappy affair with a soprano, and the extraordinarily exciting and powerful Totenfeier, Mahler’s first foray into orchestral music, and later reworked into the opening movement of his second symphony.

'Don't be misled by the album's short duration into thinking you're getting less than the full measure of live music-making: Vladimir Jurowski brings Mahler's tragic worlds—both cosmic and human—alive with incomparable vividness' (BBC Music Magazine)» More

‘Yet in its original form, as Vladimir Jurowski's gripping performance (from a Royal Festival Hall concert last year) shows, it's already a fearsomely original conception, without the sheer muscle of the final version perhaps, but still unlike anything in the orchestral repertory at that time. The OAE's period instruments emphasise its rawness, just as they point up the anguished detail of the accompaniments to the Lieder eines Fahrenden Gesellen … without unnecessary gilding' (The Guardian)» More

As a Wagnerian, the young Mahler took the Wagner-Liszt views on ‘the music of the future’ very seriously. Yet at the same time something in Mahler fought against the idea of viewing Beethoven merely as the inspired prophet of the Lisztian symphonic poem or the Wagnerian ‘total work of art’. Mahler’s first three symphonies see him struggling to reconcile these opposing urges. When his purely orchestral First Symphony first appeared in 1884 (around the same time as Lieder eines fahrenden Gesellen) it was entitled ‘Symphonic Poem’ and came with an explanatory programme, linking it to Jean-Paul Richter’s once hugely influential novel Titan. But before long Mahler had begun to lose faith in programmes. People would go taking them literally, like the old Russian lady who asked him to describe heaven for her—surely not a problem for the composer of the ‘Resurrection’ Symphony? By the time he came to write his Fourth Symphony he had dispensed with literary props altogether.

Something of this inner conflict can be sensed in the indecision that marked the early stages of composition of the Second Symphony (the so-called ‘Resurrection’ Symphony). Mahler began work on a huge symphonic funeral march in the summer of 1888. At first he seems to have viewed it as the first movement of an orchestral symphony; but before long the conception had changed, and Mahler was looking on this movement as a self-standing symphonic poem with the title Totenfeier—‘Funeral Rites’. Eventually this was revised, but not essentially reconceived, as the first movement of the Second Symphony. Totenfeier is scored for more modest orchestral forces than the later symphonic version (though they are still large by the standards of the time). It was only later that Mahler added the second harp and set of timpani, the two piccolo clarinets and the four extra brass. Yet the colours remain more or less the same. We also find broadly the same narrative sequence: the harsh tones and jagged rhythms of the opening march theme are offset by a gentler, aspiring melody in the major key. The opposition between these two types of music—grim pessimism and tentative aspiration—continues through all the changes of tempo, texture and key that follow. But in Totenfeier, as in the Second Symphony’s first movement, it is death who finally proves the victor: a brusque falling scale ends pathetically in hush, and extinction.

On one level Mahler’s Lieder eines fahrenden Gesellen (‘Songs of a wayfarer’) is romanticised autobiography. Mahler himself had fallen in love with a young woman, striking for her ‘two blue eyes’ [the zwei blauen Augen of the fourth song]. The woman in question was a singer named Johanna Richter, a member of Mahler’s cast of singers at the Kassel Opera House. As in Lieder eines fahrenden Gesellen it all ended in tears—though obviously not in suicide (the implied fate of the lovelorn young man in the final song). The personal ‘truth’ of the cycle lies in its dramatised representation of Mahler’s own intense mood swings: the ecstasies and agonies of the rejected lover, and his growing sense of alienation, from the loved one in the first song, from nature in the second, and from hope in the finale.

At the same time Mahler is acutely conscious of his artistic lineage. The great figure looming in the background is not Beethoven—as so often in the symphonies—but Schubert, the towering father figure of German romantic Lieder. As in Schubert’s great song cycle Winterreise [Winter Journey], the outcast lover sets out on a journey that leads away from the promise of happiness in love to despair and death. Schubert’s imagery is echoed too. The linden tree (Der Lindenbaum) that evokes such powerfully mixed feelings in the first part of Winterreise returns in the final song of Lieder eines fahrenden Gesellen, as the lover’s grief finds final release.

However even in this relatively early work (the first version dates from Mahler’s 24th year) there is so much that is recognisably Mahler: the bitter-sweet folksong phrases of the second song, the brilliant, acrid woodwind and brass writing (the ‘burning knife’) in the third—and above all the sharp-edged irony: the limp, forlorn little dance figures that begin the first song, or the seemingly childlike simplicity of the very last flute and harp phrases, which nevertheless manage to snuff out any suggestion of major-key consolation. Again one may be reminded of Winterreise, in particular the delicate but grim final minor-key twist in the song Frühlingstraum [‘Dream of Spring’]. But although Mahler may have taken his cue from Schubert, at 24 he has already made this kind of device entirely his own.