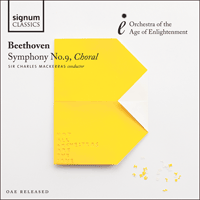 Orchestra of the Age of Enlightenment, Sir Charles Mackerras (conductor)

Beethoven’s euphoric Symphony No 9, like his No 5, is one of those pieces of classical music which transcends the barrier between musical genres—one of the few works of the classical canon to be firmly rooted in the 'popular' consciousness. Who can fail to be uplifted and caught up in the joyous Ode to Joy finale? For this performance, recorded live at the Edinburgh International Festival in 1994, the Orchestra of the Age of Enlightenment was joined by the renowned conductor and long-time collaborator, Sir Charles Mackerras.

'Signum has unearthed a live Beethoven: Symphony No 9 at the 1994 Edinburgh Festival with Sir Charles Mackerras and the Orchestra of the Age of Enlightenment in cracking form. Sir Charles was a pioneer of cleaning off the varnish to promote a lither Beethoven, with a spring in his step, in performances echoing those of the composer's time. Despite a fast pace, the slow movement is full of spiritual balm. The outer movements are elemental in proper revolutionary style; the finale's found British soloists are excellent. Highly recommended' (The Mail on Sunday)

'This is a performance on period instruments by a chamber orchestra, but that is not to say that the sound lacks body: 44 string players are listed and the woodwind section is doubled. The OAE's playing is lean and muscular but there's plenty of espressivo and dolce lyricism too. Confirmation that this is indeed a live recording comes from a couple of rather endearing squeals from the oboes in the Scherzo and a early flute entry in the finale' (Gramophone)
'No composer has grappled so vigorously with the fundamental physics of harmony as Beethoven does in his first movement, then delivered on such a humane and joyful finale … Mackerras's account has drive and integrity in spades. A souvenir of a much-loved British' (Classic FM Magazine)» More
'A Mackerras's 1994 Edinburgh festival performance with the Orchestra of the Age of Enlightenment is one of the most thrilling Beethoven interpretations I have ever heard. It bristles with revolutionary spirit: there's no attempt to tame or otherwise civilise the sounds that Beethoven's imagination is racing to conjure into being. You feel as if the conductor can barely keep the music on a leash, such is its volcanic energy and yet Mackerras's way with this symphony is all part of a coherent vision. The OAE play like gods and demons, with pure string timbres one moment, raw woodwinds the next, and even the slow movement catches your breath, thanks to Mackerras's ability to shed new light. The performance is crowned by a finale that clearly inspired everyone taking part' (Financial Times)

Friedrich von Schiller’s poem Ode to Joy could almost have been calculated to appeal to the idealistic Beethoven. Written in 1785, it lauds the joys of fellowship, the happiness of married life, the wonders of nature and the universe and the eternal mystery of divine love, and as early as 1793 Beethoven was considering setting it as a song. In 1812 he attempted a ‘choral overture’ using parts of the text, but it was not for another decade that he was to find a true home for it when he made it the subject of the extraordinary and revolutionary finale to his Ninth and last symphony, the first ever to include a choral movement.

It was not just accommodating Schiller’s words that took a long time, however. Although the symphony was essentially composed in a ten-month burst between April 1823 and January 1824, there is a case for saying that Beethoven had been writing it for much longer—he had contemplated a D minor symphony as early as 1812, immediately after the completion of the Seventh and Eighth, while some of its musical ideas date back even further. Not that these matters would have concerned the audience at the work’s first performance in Vienna’s Kärntnerthor Theatre in May 1824; for them the excitement lay in hearing Beethoven’s first new symphony in twelve years, and they lapped it up. At the end the applause was thunderous, and the deaf composer was turned round by the contralto soloist Caroline Unger to see hats and handkerchiefs being waved frantically all over the hall. The whole audience was impressed, crushed by the greatness of your work’, wrote Beethoven’s friend Anton Schindler. Vienna may not have always appreciated Mozart to the full, and may not always have understood what Beethoven was about, but it certainly loved its presiding musical genius.

The Ninth is not, strictly speaking, Beethoven’s last symphony—in 1825 he began but failed to complete another—but it is certainly a fitting summation of his mighty contribution to the genre’s history. His achievement had been nothing less than that of bringing about an irreversible transformation in the entire concept of what a symphony is, turning a piece of concert music designed primarily to entertain into a psychological journey in which, over the course of four movements, the listener’s emotions undergo some kind of change. This could be triumph over adversity, as in the death and rebirth of the Eroica, or a passage from darkness to light as demonstrated in the famous Fifth Symphony. In the Ninth, it is a journey from a bleak and brutal void to a glorious vision of an ideal world of love, tolerance and universal brotherhood.

Certainly the shimmering strings which open the first movement seem to conjure a mood of primeval emptiness before the music moves on into more combative regions. At the end, a sternly resolute theme emerges from the depths like a clenched fist. The second movement seems straightforwardly joyful with its playful timpani beats (spontaneously applauded at the first performance), its interplay between the violins and its cheeky ending, but there is more than a hint of seriousness underlying it as well. The third movement is unambiguous in intent, however, a sublimely tender and beautiful set of variations on a tune whose deceptively simple hymn-like nature is a Beethoven speciality, above all in ‘late-period’ works.

And then the finale bursts in, startlingly and radically. At first the orchestra reviews themes from all three earlier movements, with the cellos and basses seeming to debate their worth in melodic phrases which deliberately mimic the style of vocal recitative. It is as if they are struggling to tell us something, yet it is also a dramatically enhanced continuation of the fragmentary, groping introductions to the finales of two earlier symphonies, the First and the Third. Eventually, though, the orchestra hits on the now-famous folksong-like theme, but after they have played a few variations on it, another upheaval leads to the first human sounds—a bass soloist commanding us all to discard all this in favour of ‘pleasing and more joyful tones’. These words are Beethoven’s, but from here to the end it is Schiller’s message which dominates, and as the voices take over we hear in the course of further variations on the theme a vision of Elysium that is by turns exultant and awestruck. ‘This gigantic work’, Hans Keller suggested, ‘should convince even the firmest pessimist that mankind’s life has been worthwhile.’