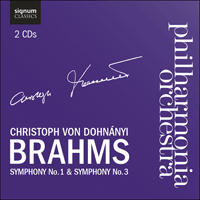 This new set from the Philharmonia completes the collection of Brahms symphonies conducted by Christoph von Dohnányi.

Symphony No 1 (or 'Beethoven's 10th' as conductor Hans von Bülow refered to it) took Brahms at least 14 years to complete. It was premiered in 1876 to great acclaim. No 3 was written in 1883 and is perhaps the composer's most elusive symphony. It is certainly his most adventurous, featuring daring modulations and a Schumann-esque scheme of thematic inter-relationships.

The Philharmonia Orchestra is widely recognized as the UK's finest orchestra with an impressive recording legacy. Christoph von Dohnányi has been affiliated with the Philharmonia since 1994. He was made Honorary Conductor for Life in 2008 after 11 years as Principal Conductor.

'The excitement builds steadily, with impressive horn-playing to herald the finale's 'big tune'. The Third Symphony's gentler climate suits Dohnanyi's approach, and is graced with Philharmonia playing of much grace and poise … the recorded competition is fearsome, particularly from greats like Karajan and Giulini … if you like your Brahms done in no-frills style, these performances will appeal strongly' (Classic FM Magazine)» More

The rise of the symphony was initially an extraordinarily rapid continuum, with Haydn and his contemporaries fluently penning one after another in the second half of the Eighteenth Century, as these works for extended ensemble gradually shed their attachment to church, chamber, vocal or choral music. And, as the form of the symphony developed, concentrating the minds of composers and gradually becoming an important cultural event, so the works declined in number and grew in complexity and length. Compared to Haydn’s mass of symphonies, even Mozart’s 40-something efforts in the genre appear relatively few in number. With the dawning of the Nineteenth Century, composers, promoters, critics and the public alike continued to focus more closely on the symphony, attaching ever greater importance to it, and therefore the numbers dropped further into single figures, but with significantly greater size, depth, length and technique. By the time we reach 1804, and the breadth and emotional impact of Beethoven’s iconic ‘Eroica’ symphony, the form is barely recognisable from just 50 years previously.

Beethoven’s olympian efforts cast a huge shadow over not only the succeeding generation of would-be symphonists, but have darkened the hopes of almost every composer since. Although the symphonic genre would prove to be resilient, Beethoven’s nine essays were regarded by 1830 almost as the end point in the field. It was but a momentary blip in the symphony’s inexorable Romantic mission, but composers were certainly suffering from a crisis of creativity, burdened by Beethoven’s monumentalism. Wagner abandoned his own symphonic efforts in the early 1830s agreeing with many a commentator that Beethoven’s Ninth had effectively delivered the final word on the symphony as a living, developing genre—a poor time, then, for a budding symphonist to be born just a few years after the death of Beethoven, in 1827. Johannes Brahms, born six years later, became one of the great composers of his or any other day, but was not only completely over-awed by a performance of Beethoven’s Ninth Symphony as a youth, but could later in life confide in the conductor Hermann Levi, ‘I shall never write a symphony. You have no idea how the likes of us feel when we hear the tramp of a giant like HIM behind us’.

In 1853, Brahms first met Robert and Clara Schumann—an event which profoundly changed his life. Brahms and Clara retained a complex but harmonious relationship until their deaths in 1897 and 1896, respectively, whilst Robert, whom Brahms knew for only a few years, celebrated the 20-year-old in a famous article Neue Bahnen which appeared in his journal, Neue Zeitschrift für Musik:

And now he has arrived … His name is Johannes Brahms, and he hails from Hamburg … Sitting at the piano, he began to explore the most wonderful regions. We were drawn into more and more magical circles by his playing … There were sonatas, or rather veiled symphonies; songs whose poetry could be understood without words; piano pieces both of a demonic nature and of the most graceful forms; sonatas for piano and violin; string quartets, each so different from the other that they seemed to flow from various different sources. And then it seemed as if all those rushing streams combined as in a waterfall … accompanied on the bank by the playfulness of butterflies and the voices of nightingales.

Schumann’s musical acumen was so acute he predicts, in the same article, that when the orchestra lends itself to the young man, he will give us glimpses of a magical world. What even Schumann couldn’t divine, was that it would take Brahms another 22 years to complete his First Symphony and continue the Haydn-Mozart-Beethoven-Mendelssohn-Schumann symphonic line. By 1876, Brahms was no longer the promising young gun, having matured into a highly respected master of his art. The symphony’s opus number, 68, is ample evidence of his published compositional activity, and it is a matter of much conjecture as to the amount of completed or partial works which Brahms destroyed during these two decades (upper estimates of destroyed or partial string quartets, for example, number around 30).

As Schumann gradually descended into madness and eventual death, in 1857, Brahms was already ignoring his own negativity towards the symphony and replacing it with Schumann’s confidence that he was born to write for the orchestra. Significant sketches from these years did not produce a symphony but were instead co-opted into his mighty Piano Concerto No 1 in D minor, the first of his two serenades for orchestra and eventually into Ein deutsches Requiem. For much of the 1860s, Brahms avoided composing, or at least publishing, large-scale orchestral works, but never strayed far from symphonic thought. The chamber works of the decade show him honing thematic development, variation technique and instrumental colour in a series of masterpieces which are less the work of a journeyman composer and more the master composer at work. Glorious compositions from the period include two string sextets, the Piano Quintet, three piano quartets, the Horn Trio and two spectacular variation sets for piano, on themes by Handel and Paganini. In 1873, the publication and favourable reception of his first purely orchestral work in well over a decade, the Variations on a Theme by Joseph Haydn, provided the final push for Brahms to look Beethoven in the eye and finish his Symphony No 1 in C minor, Op 68.

The première, conducted by Felix Dessoff in Karlsruhe on 4 November 1876, was a triumph, as indeed were most subsequent performances, leading the great conductor Hans von Bülow to dub it ‘Beethoven’s Tenth’. Although seemingly a well-meant quote, comparing the work as a worthy successor to Beethoven’s Ninth Symphony, it was double-edged for Brahms, especially when critics noted the similarity of parts of the Finale of the symphony to Beethoven’s ‘Ode to Joy’. ‘Any ass can see that’ was Brahms’s famous rejoinder, without mentioning that the work has actually more in common with the great master’s Fifth Symphony in its overall structure. The highly influential critic Eduard Hanslick largely raved about the piece, ‘Even the layman will immediately recognize it as one of the most individual and magnificent works of the symphonic literature … this new symphony of Brahms is a possession of which the nation may be proud, an inexhaustible fountain of sincere pleasure and fruitful study’. Hanslick has been proved correct through the ages: the work is pure Brahms—a vast, dramatic gesture, from the searing strings and portentous timpani of its opening to the herculean, thunderous and utterly triumphant finale.

After the decades of intimidation, hard graft and diligent study that eventually led to his turbulent First Symphony, the Second appeared just over a year later, a surprisingly sunny work and unsurprisingly thought of as his equivalent to Beethoven’s ‘Pastoral’ symphony. Six more masterpiece-filled years followed before Brahms settled to compose his Symphony No 3 in F major, Op 90. Now 50 years old and considered by many to be the greatest instrumental and orchestral composer of the age (Wagner and Verdi taking the operatic plaudits) he settled in the spa town of Wiesbaden in the summer of 1883 to complete the symphony. A private, occasionally difficult individual, Brahms was no great gatherer of honours, refusing to attend conferred doctorates and the like from even the most august institutions. Neither was he a family man, remaining a bachelor until the end of his days. But during his summer in Wiesbaden, he struck up a close relationship with the mezzo-soprano Hermine Spies for whom he wrote and arranged songs and accompanied in recitals. Brahms’s friend and biographer (in eight volumes), Max Kalbeck maintained that Brahms worked his own personal motto theme, the notes F-A-F into the composition.

Such motto themes are not unusual in music. Some are musically explicit and easy to recognise, such as those of Bach or Shostakovich, essentially using musical notes to represent their names, whilst others require a great deal of detective work, a particularly complex example being Alban Berg. Brahms had early experience of dealing with such romantic motifs immediately after meeting Robert Schumann in October 1853. Schumann had the idea of creating a sonata for the famous violinist Joseph Joachim. Joachim’s personal motto theme were the notes F-A-E, meaning Frei Aber Einsam (free, but alone). Schumann, his pupil Albert Dietrich and the young Brahms all contributed to the work. The bachelor Brahms’s own motto, F-A-F, translates to Frei Aber Froh (free, but happy). Kalbeck’s idea that Brahms was indeed infatuated with Hermine Spies, but displayed an ambivalence about the relationship by often substituting the minor mode F-A flat-F instead of the happier F-A-F, is a matter for conjecture, but certainly adds spice to the work.

Unlike his First Symphony, there are not too many clues as to the genesis of the Third, so relatively rapid was its composition. It is the shortest of his four symphonies and the only one to end in a reflective and accommodating, rather than triumphant, manner. Its balance and poise brought Brahms his finest success at its première, conducted by Hans Richter, in Vienna on 2 December 1883. Despite its romantic attachment to Hermine Spies, it was Clara Schumann to whom Brahms presented the symphony’s manuscript as a gift on her 64th birthday. She in turn wrote the following delightful summation of the work:

I have spent many hours with your wonderful creation … What a work! What a poem! What a harmonious mood pervades the whole! All the movements seem to be of one piece, one beat of the heart, each one a jewel! … I could not tell you which movement I loved most. In the first I was charmed straight away by the gleams of dawning day, as if the rays of the sun were shining through the trees. Everything springs to life, everything breathes good cheer, it is really exquisite! The second is a pure idyll; I can see the worshippers kneeling about the little forest shrine, I hear the babbling brook and the buzz of the insects. There is such a fluttering and a humming all around that one feels oneself snatched up into the joyous web of Nature.