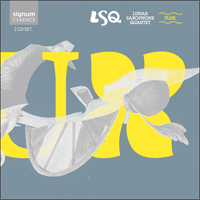 Formed in 2002, the award winning Lunar Saxophone Quartet has developed a reputation for their commitment to composer/performer collaborations, leading to dozens of commissions from a variety of different composers.

Performances have spanned a wide range of occasions, from Bryn Terfel's 'Faenol Festival' and the Welsh BBC Proms, to live broadcasts on BBC TV and Radio. The album features a programme of newly commissioned works by some of Wales's youngest and most gifted composers together with those of more established figures.

LM-7: Aquarius
Between 1968 and 1972 the United States launched a series of manned space missions under the name “Apollo” which included the first moon landing (in July 1969). LM-7: Aquarius was the seventh lunar module that NASA sent into space, on the Apollo 13 mission. It was launched in April 1970 and would have been the third landing on the Moon, but the Command Module developed a technical failure and the three astronauts aboard were forced to use the Lunar Module’s resources as a “lifeboat” during the return trip to Earth, only narrowly escaping with their lives. Gabriel Jackson’s work for saxophone quartet takes not only its title from the mission but also the work’s underlying structure: the piece is in eleven continuous sections, the proportions of which are derived from the ten letters and the number of the title. Its character is unashamedly extrovert; in the composer’s words, “a show-off display piece with spot-lit solos for each player, a burst of collective virtuosity to blast them into orbit and beyond, eventually reaching a much stiller, distant place”.

LM-7: Aquarius was commissioned by the Lunar Saxophone Quartet, and first performed by the quartet in St Mary’s Episcopal Cathedral, Edinburgh, in August 2006. Published by Oxford University Press.

Flux
Flux is structured in the following manner: two outer sections of mainly static material framing a middle section of more rapid writing. The two outer sections were formulated using calculations to determine the frequency of Ion Flux; the photon opening angle of an individual electron as a function of the device critical energy convolved with the electron beam divergence. The resultant pitches were calculated by taking readings of photon energy at certain points on the graph, and then their frequencies calculated and converted into pitches within the nearest quartertone.

The resultant pitch sequence is heard in their entirety during the opening and then subjected to manipulation at certain points throughout the work and the resultant harmonies also produce various states of frequency oscillation which are another primary concern of the work. The work also uses various serial techniques but it is the mathematical principle that was the chief aspect involved in the compositional process. (Ashley John Long)

Flux was written for and premiered by the Lunar Saxophone Quartet at the Royal Welsh College of Music & Drama, Cardiff, in November 2006. Published by Staunch Music.

Diaphanousphere
Diaphanousphere is so named to illustrate the delicate transparency of the work and its ultimate recapitulation. The music is essentially abstract, but is indicative of snowfall; gentle and restless, where fragmented melodies are passed between each member of the quartet and piano. There is a ‘festive’ theme introduced in the second section, which provides a stark contrast to the darker opening. The piece aims to create a very elegant sound world, in which the saxophones and piano have a constantly changing relationship. (Lucy Pankhurst)

Diaphanousphere was written for and premiered by the Lunar Saxophone Quartet and Helen Mills (piano) at Wesley’s Chapel, London, in February 2007. Published by Staunch Music.

Five Short Pieces & Four whispers for Archie’s chair
Five Short Pieces & Four whispers for Archie’s chair were composed during the winter of 2003–04 for the Apollo Saxophone Quartet who gave the premiere at the Brighton Festival on 7 May 2004. Lasting no more than two or three minutes each, each piece takes as a title an occupation or craft of the kind that might have been found in late medieval society. The first (The Archer) alternates key clicks with unison passages that gradually move into the foreground. Flickering arpeggios and a sturdy bass dominate the second (The Blacksmith), evoking briefly the flames of the Blacksmith’s fire and thud of his hammer. The spacious firmament can be felt in the slow solemn tread of the third movement (The Starwatcher) whilst in The Swordsman, the tricky rhythmic unison mirrors the cut and thrust of the art of fencing. Finally, a chorale-like final piece, placed in the richest registers of the saxophones, reflects the gravitas of The Pastor.

Appended to the Five Short Pieces is a sixth: Four whispers for Archie’s chair. Archie and Rene were neighbours. Archie was dying of Parkinson’s disease and Keith and Julie lent him a chair with a bowed back for support. Thereafter Keith, Julie and their children referred to the chair as “Archie’s Chair”. Lasting just a couple of minutes and demonstrating an almost Skempton-like simplicity, Four whispers for Archie’s chair is a small tribute or remembrance of that chair and its owner. It consists of four gentle refrains for the soprano saxophone over an undulating accompaniment. Published by Oriana Publications.

VENT
VENT was originally composed in the autumn of 1994 for four clarinets (two B flat clarinets and two bass clarinets). The version heard on this disc is a transcription for saxophone quartet made by the composer. The score was commissioned by No Strings Attached early in 1995, with funds provided by South East Arts.

The idea of writing for a family of instruments with a common tone quality was an important factor behind the music; a concept that still remains central in this transcription for the family of four saxophones. The composer has written: “the timbral quality of four clarinets together was a factor I constantly kept in mind during composition—the homogenous mellow wood sound in the low chalumeau register, the piercing nature of the high notes and the ability to move seamlessly through the whole range.

A number of ideas stemmed from this given—first I wished to explore arpeggio figures (something I had never done before) both in a controlled ‘burbling’ kind of way and in a broad-brush fanfare sense. Out of this I began to use harmonic systems based on fourths, thirds and modes in quick succession or simultaneously so that for short stretches of the piece a harmonic instability might occur.

Finally I wished to pit sudden bursts of pent-up energy alongside carefully constructed passages thereby highlighting the exorcising nature of the music to which the title might refer”.

4 Chair legs
In New York City, one of my freelance gigs is that of a modern dance accompanist. As such, I spend a lot of time improvising at the piano, and working with dancers. When the Lunar Saxophone Quartet asked me to compose this work, I stumbled upon the idea of creating a very modern version of the historic dance suite. Each movement started off from the idea of a classic dance form: The Waltz, The Tango, The Tarantella, and The Polka. From those starting points I simply let my imagination run free, abstracting and reconceiving these dances in wholly new ways. In doing so, my mind naturally wandered to a favourite Huxley quote from The Doors of Perception about seeing old things in entirely new ways; hence the title. Anyhow, as with many of my works, more important than anything else this piece is about having a raucous good time while dancing the night away. Enjoy. (Eric Schwartz)

4 Chair legs was written for and premiered by the Lunar Saxophone Quartet and Helen Mills (piano) at Wesley’s Chapel, London, in February 2007. Published by Staunch Music.

In Memoriam
I wanted to create a piece for saxophone quartet that endured a sound world that was quite different from other works that I have heard, such as works that flourish with melodies and bestow a platform for the virtuosity of the instruments. Instead, In Memoriam is a very slow piece and built upon the idea of a very gradual and subtle unwinding of harmonies as it progresses. I also wanted to experiment with using overtones, as I knew they could be effective within the environment I wanted to set up. The beginning and end of the piece demonstrates this timbral effect—I have written G (tenor) against Ab (alto), which creates a warm panorama of overtones that beat against each other. These attributes perhaps explore the virtuosity of the players in the way of stamina, subtlety and the way the instruments can melt together and sometimes become one.

Overall, the techniques used were to create a piece that is meditative and forms a kind of expressive staticism to aid relief of a contemplative wilderness that one can endure with the loss of someone very close to you.

The piece was written in the memory of my father, Leslie Williamson. (James Williamson)

In Memoriam was written for the Lunar Saxophone Quartet and premiered at The Warehouse, London, on 18 December 2007 where it won first prize in the LSQ New Music Award 2007. Published by Staunch Music.

De L’hôtel de la ville à la Concorde (from La Traversée de Paris)
Composed to mark the 200th anniversary of the French Revolution in 1789, De L’hôtel de la ville à la Concorde (From City Hall to the Concorde) forms part of La Traversée de Paris (The Crossing of Paris), an album consisting of seventeen pieces. Each refers to a specific or generic location, historical incident, or cultural development in Paris since the time of the Revolution, charting the city’s rich and often violent history from 1789 to 1989. The work was composed for an audio-visual exhibition of the same name that took place at the Grande Arche de la Défense from July to December 1989 to celebrate the bicentennial of the French Revolution. De L’hôtel de la ville à la Concorde is the thirteenth section and refers to the Place de la Concorde, the largest square in Paris situated between the Tuileries and the Champs-Elysées. In 1792, during the French revolution, it was called Place de la Révolution and a guillotine was set up. In the two years that followed 1119 people were beheaded there.

The original scoring was for the Michael Nyman Band and the arrangement for saxophone quartet and piano was made for the present CD by Joel Garthwaite.