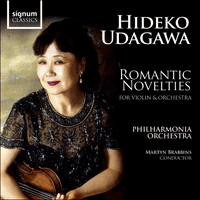 Romantic novelties for violin and orchestra

Hideko Udagawa has performed extensively throughout the world and captivates international audiences with her artistry and enthusiasm. As a protégée of Nathan Milstein, she has inherited the great Russian romantic tradition of violin playing, and brings it to the fore in this collection of works by Rimsky-Korsakov, Tchaikovsky, Glazunov, Gade and Ysaÿe.

'Udagawa's mastery of the Russian Romantic school of violin playing is a tour de force. Her distinctly northern European style suits this repertoire perfectly' (Classic FM Magazine)
'Udagawa [is] a performer who puts the spirit of the music ahead of all other considerations, and that is what makes this disc interesting' (Fanfare, USA)» More

Whilst not every item in this programme can be traced to what is today termed the Russian School of violin playing, which is to say that which emerged in the latter part of the 19th century and reached its flowering in the early decades of the 20th, there is no doubt that each of the composers represented here were—in their violin writing—either members of, or strongly influenced by, the violin schools of northern Europe, rather than the Mediterranean schools of Italian or Spanish provenance. In this regard, the repertoire on this disc provides a conspectus of that era of concert violin music composed within an approximate twenty-year period (c1874–93).

If the most famous early Russian violin composers and teachers included Ivan Khandochkine (1747–1804), those of his successors created a fertile environment in which Peter Stoliarski and the Hungarian-born Léopold Auer were able each to establish a style of violin playing which came, in many respects, to dominate the world—especially after the 1917 revolution, which led to many of the younger masters—but not all—to seek a new life in the West and in the United States. If this group included amongst Stoliarski’s pupils David Oïstrakh and Nathan Milstein, and Oistrakh’s son Igor, Auer’s pupils were no less eminent: Jascha Heifetz, Mischa Elman and Efrem Zimbalist studied with him as also did Nathan Milstein. Clearly, the establishment of such a fertile environment proved to be an inspiration for composers, and not merely Russian composers.