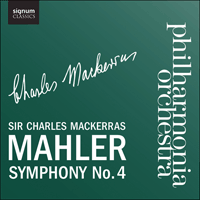 Recorded at the Queen Elizabeth Hall in February 2006, the next album in Signum's series of live orchestral recordings with the Philharmonia features the late Sir Charles Mackerras conducting Mahler's Symphony No 4. The concert was a memorable one!

'The well-prepared Philharmonia strings (slightly reduced in number?) are lean and pristine throughout, albeit with no shortage of portamento, the woodwind and brass notably perky when it comes to illuminating the rustic minutiae of Mahler's invention' (Gramophone)
'Repeatedly things catch the ear and impress with their rightness. The abrupt, non-transition back to the main theme in the first movement comes as the kind of jolt Mahler surely had in mind. The deliciously abrasive solo violin in the scherzo also feels just right' (BBC Music Magazine)

'No one thinks of Mackerras as a Mahler specialist … yet this account of the Fourth Symphony stands comparison with any currently available on disc … Mackerras's performance has...vivid directness … almost astringent in the climaxes of the first movement, and using a daringly wide dynamic range in the spectral scherzo and the slow movement' (The Guardian)

'The concerts played [in Queen Elizabeth Hall] had a special quality as the orchestra and its conductors were forced to rethink balance and timbre. This live recording captures that awkward, edge-of-your-seat magic … with a daringly folksy 'In Gemächlicher Bewegung' and a 'Ruhevoll' of stunning simplicity' (The Independent on Sunday)

My fourth will probably be on the programme in Vienna in October and then you will glimpse an aspect of me that you do not yet know. All I fear is that this aspect will please you most, so that, henceforth, you will only look at me from one side.

Mahler’s gnomic utterance to his confidante, Nana Spiegler, hints at some aspects of his Fourth Symphony that have absorbed both critics, apologists and audiences from its first performance until relatively recent times. It also reveals his own cognisance of the symphony’s unique position as a turning point in his output. This is no gargantuan orchestral affair, unlike his previous three symphonies, with the scoring, for Mahler at least, being relatively restrained. There is no place for the chorus as in the Second and Third Symphonies and, perhaps more tellingly given the nature of the work, the trombone section and the tuba are also deemed surplus to requirements, and the trumpets, horns, woodwind and strings are also scaled down. Its duration further enhances the notion of a lighter-weighted work. A mere 55 or so minutes long, it is generally his shortest symphony in performances, some 40 minutes shy of the Third’s mammoth length, and even pipping his First by a couple of minutes. The Fourth’s lighter, lyrical, playful character, comparatively devoid of Mahlerian clouds, gloom and doom or frenzied outbursts, is at least part of ‘the aspect of me that you do not yet know’. It breathes much the same air as Haydn and Mozart, and although written at a time of great stress, may well reflect Mahler’s contentment at having returned, in 1897, to his adopted city in the powerful position of director of the Vienna Court Opera.

In 1899, firmly ensconced in the Austro-Hungarian capital, he began to sketch out a plan for the symphony. His previous three works in the genre had each come with an explanatory programme or at least movement titles giving both audiences and musicians clear cues as to the composer’s intentions. The Fourth was initially no different, the plan of action being sketched as follows:

However, as Mahler set to work on the piece, in the Salzkammergut spa town of Aussee, the plan was set to change. The holiday was a disaster, cold weather and the proximity of the local bandstand disturbing the supersensitive composer. With the busy opera and concert season looming again, he launched into a frenetic couple of weeks’ intense work which was to bear fruit the following summer in the more conducive atmosphere of Maiernigg, in Carinthia. During this composing ‘holiday’ he radically restructured things. Das irdische Leben was extracted to become an orchestral song, Morgenglocken was integrated into the Third Symphony and Die Welt ohne Schwere is assumed by many a scholar to have become the Scherzo in his succeeding Fifth Symphony. Such tinkerings and wholesale revisions were far from unusual for Mahler. There are numerous instances of overlaps, interpolations and occasions where the symphonies spill over into each other. The eventual final movement of the Fourth is one of the more spectacular cases, having been composed some nine years before appearing in its final guise. In 1892, after almost two years of composing next to nothing, he was rejuvenated by revisiting a collection of folk poems entitled Des Knaben Wunderhorn. Collected, edited, and sometimes freely composed by Achim von Arnim and Clemens Brentano, the poems presented an idealised, bucolic vision that re-ignited a love of German folk song, in composer and burgher alike, contributed much to the Romantic Movement in the arts and suffused Mahler’s first four symphonies. He produced five songs to Wunderhorn texts in 1892 of which four were later published in his Lieder aus Des Knaben Wunderhorn. The fifth, which did not make it into the collection, was Das himmlische Leben. It was earmarked it for inclusion into the Third Symphony, but on realizing its potential, he instead re-employed it as the final movement of the Fourth.

Whether in unwitting scorn or utter comprehension, the critic Max Graf was precise in declaring after the first performance of the work that it must be ‘read from back to front like a Hebrew Bible’. As well as harking back to the Third Symphony, Das himmlische Leben, the last movement of the Fourth, informs the three movements which precede it since they all include musical material that is extrapolated backwards from the finale whilst appearing to the listener to build inexorably from movement to movement toward a satisfying close. The première of the symphony took place on 25 November 1901, with the composer conducting the Kaim Orchestra and soprano soloist, Margarete Michalek. Despite a return to Viennese classicism of a sort, the event and subsequent performances were routinely booed, Mahler being charged with posturing and dealing in musical material ‘alien to his nature’. And yet, in time, the Fourth became the first of his symphonies which begin to make inroads into the orchestral repertory, clearing the way for the Mahler revival several decades later.

The Symphony No 4 in G Major opens with a ‘Once upon a time’ introduction of jingling sleigh bells and chirping flutes and without the call to action from the brass or the portentous strings of Mahler’s earlier (and indeed many later) symphonies. Instead we have an almost child-like innocence and joy. The argument proper then begins with an almost classically balanced exposition, with two clear-cut themes that remind us of Schubert’s Vienna and pastoral calm respectively. The development section is another matter entirely as Mahler shows another new aspect of himself—a new mastery of counterpoint that would never leave his writing thereafter. Motifs are shuffled and transformed into new and yet still comfortably recognisable complexes until the trumpets blaze, in anticipation, elements of the song that will end the symphony. The Scherzo is essentially in ländler rhythm, which is occasionally visited by grotesqueries including the use of a violin tuned higher than normal, initially annotated with the legend, ‘Friend Death strikes up the dance’. Although often eerie in effect, the movement ends quietly without real rancour, the composer explaining that, ‘it wasn’t meant so seriously after all’. The spectacularly beautiful Adagio which follows is one of Mahler’s finest slow movements, and although he submitted no final written programme for the symphony, he described it thus:

St Ursula herself, the most serious of all the saints, presides with a smile, so gay in this higher sphere. Her smile resembles that on the prone statues of old knights or prelates one sees lying in churches, their hands joined on their bosoms and with the peaceful gentle expressions of men who have gained access to a higher bliss; solemn, blessed peace; serious, gentle gaiety, such is the character of this movement, which also has deeply sad moments, comparable, if you wish, to reminiscences of earthly life, and other moments when gaiety becomes vivacity.

The final movement and progenitor of the symphony as a whole, is the disarmingly simple orchestral song, Das himmlische Leben. It is delivered by the soprano in a joyful, child-like manner and, the composer insisted, without any hint of parody. The delights of heavenly food are extolled: the angels are baking bread, greens are plentiful and wine is free and flowing—even the lowing of the soon to be dispatched cattle is a simple inevitable event. Mahler lovingly paints the text with his orchestra, the overwhelming joy of the music of the heavens, and the symphony itself, played out by quiet, celestial harps.