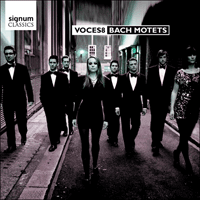 Voces8 return to disc with this new recording of J.S.Bach's Motets, BWV225-230. Joined by the Senesino Players, this young group prove their versatility and skill in performing some of Bach's most challenging and engaging compositions.

'The period performance movement has demonstrated how to bring life and energy back to Bach's choral textures, but none of the big names have produced anything that is quite as much fun as this. Obviously, this isn't the last word when it comes to Bach's Motets, but it brings an interesting new angle to the music, and possibly a new audience too' (MusicWeb International)

Given the scale of Bach’s oeuvre, one might assume that there may not be too much to gather about the composer from a mere six motets, a form otherwise unrepresented in his repertory. However, Bach’s motets are among the greatest of his output.

Music was fundamental in the Lutheran liturgy of Bach’s lifetime. Indeed, just over a century before Bach’s birth, Luther’s vision of united social classes and the liturgical involvement of all was realised through the medium of hymn singing. The motet however was not part of the conventional Lutheran liturgy. Coupled with Bach’s choice of texts, this suggests that these motets must have been written individually: special commissions for funeral services or important church feasts are the most likely occasions.

Why then perform Bach’s motets as a collection? Voces 8’s answer is simple. Collectively these motets epitomise Bach’s passion for and commitment to the Lutheran faith. To draw on but two examples, Fürchte dich nicht, ich bin bei dir (‘Do not fear, I am with you’) gives emphasis to the belief in the afterlife by first repeating and then concluding with the opening text. In Komm, Jesu, komm, the final chorale is a poignant conclusion to the complex polyphonic setting of ‘du bist der rechte Weg, die Warheit und das Leben’ (‘you are the right way, the truth and the life’), which, after a lengthy passage of musical and textual repetition, is the literal coming together of the eight parts and congregation: ‘Drum schließ ich mich in deine Hände’ (‘therefore I put myself in your hands’).

Through the media of text and music the six motets emanate Bach’s religious faith and demonstrate the essential parallels between this belief and his art. It is this brilliance that motivated Voces 8’s recording of Bach’s motets, inspiring the ensemble to communicate his music with passion and exuberance.