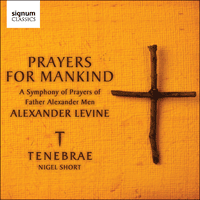 Prayers for mankind celebrates the life and writings of Father Alexander Men, a Russian Orthodox Christian priest who, whilst being little known outside of his home country during his lifetime, has come to be hailed as a saint and martyr by thousands all over the world. 2010 marks the anniversary of what would have been his 85th Birthday, as well as 20 years since his brutal assassination on the way to a Sunday morning service.

Following years of religious suppression under the communist regime, Father Alexander Men emerged as a leading Christian and humanitarian figure in Russia, through radio and TV broadcasts and his prolific written works. These prayers, set by Russian composer Alexander Levine, capture the beauty and humanity of Men’s view of the world, and are brought vividly to life by Nigel Short’s professional chamber choir Tenebrae.

'Levine is clearly no stranger to the heritage of Russian choral music, but this substantial and often virtuoso work draws from a much wider harmonic palette, and the fact that the words are set in English, and the music intended for Tenebrae, would seem also to have imparted to the work something of an English sound, to which its dedicatees respond with passion. Impressive and moving, and beautifully captured' (Gramophone)
'The album 'Prayers for Mankind', subtitled 'A Symphony of Prayers of Father Alexander Men,' celebrates the life and writings of Father Alexander Men, a Russian Orthodox priest who was brutally murdered in 1990 on his way to Sunday morning Liturgy … the music is powerfully inspired by and reflective of the beauty and profound meaning of the words. The professional English chamber choir Tenebrae negotiates the musical challenges of the score with tremendous confidence, skill, and bravura … this album will be enjoyed by all lovers of contemporary choral music and fine choral singing' (Musica Russia, USA)» More

The religious consciousness of Father Alexander Men straddles in his prayers two poles of world history, embracing simultaneously, as it were, two epochs—that of the Gospel and that of the present day. The Gospel events—in particular their dynamism, wherein the mighty, creative power of Christ and the purity of heart of His disciples goes hand in hand with human pride and a host of human vices—were an inexhaustible source of reflection for Father Alexander throughout his entire earthly service. Christianity for him did not lie in the realm of historical contemplation, but was topical and active, inasmuch as the active power of Christ was at the same time the source and the content of his world-view. “Christianity is not a new system of ethics, but a new life which leads Man into direct contact with God.” (A.M.). At the centre of this life stands Christ, who through His love and all-forgivingness, embraces the old world and proclaims the New Testament which is filled with sacrificial love for one’s neighbour. For Father Alexander Men, Christ’s earthly life is, as it were, the actualisation of the theanthropic incarnation. On the one hand, Jesus reveals His Glory and works miracles by virtue of His possessing the entire fullness of being. On the other hand, Christ, as a human being and as a Teacher, accomplishes His earthly path in prayer and fasting—this purifying power that is capable of elevating the spirit of every human being to the heights of creativity.

Father Alexander Men’s prayers should not be perceived as a commentary or a complement to the Orthodox canon. The creation of the prayers itself is the fruit of spiritual reflection over a period of decades of pastoral service, of encounters and talks with many thousands of people, both believers and atheists. These prayers are indissolubly linked to the personality of the priest himself and without doubt are one of the gems in the spiritual treasury of Mankind. They are a living communion with God and are filled with purity and strength which come from Christ. The prayers are permeated with the light of the Gospel, where human spiritual and physical weakness always find compassion and support, where every desire to come closer to Christ as the Source of life is counted as an act of spiritual endeavour and is rewarded with healing. That is why the life-creating love of Christ—the love for each person and the compassion for human weakness—occupies a special place in the prayers. Contemporary in their language and in the problems they give voice to, Father Alexander Men’s prayers express in essence the expectations of every human being living on Earth. The thirst for revelation, which is characteristic of Man of the time of the Gospels, exists inalienably, as Alexander Men is convinced, within the whole context of history, and revelation is just as much the “daily bread” for present-day Man as well. This process, in his opinion, is ongoing and its vector is directed towards infinity. The synthesis of these two epochs—that of the Gospel and that of the present day—is the result of the spiritual quest of the priest, which goes beyond the framework of a confession or a religion taken separately.

Raised in Orthodoxy and loving the Orthodox faith, and serving Christ to his last breath, Father Alexander Men always believed that loving Christ meant loving all people. And this meant loving the whole world in all its cultural and religious manifoldness: “Just as the colour white absorbs the spectrum, thus does the Gospel embrace the faith of the Prophets, the Buddhist thirst for salvation, the dynamism of Zoroaster and the humanity of Confucius. It sanctifies all that is best in the ethics of the ancient philosophers and in the mysticism of the Hindu wise men.”—Epilogue of Vol. VI of the series “In Search of the Way, the Truth and the Life”.

First Movement
Man, embarking on a new day, and turning to the Lord, unites himself in this prayer with the world, and in return endows it with the contents of his consciousness. This prayer is filled with light, energy, hope and an unbounded trust in the Creator.

Third Movement
The concept of humility is linked by Father Alexander Men directly to Christ, when Jesus, in His human hypostasis and at the moment of extreme spiritual strain, crying out to the Father renounces His own will: “Nevertheless not my will, but thine, be done.” (Luke 22:42). The fathoming of the will of the Creator, as a process, is the fundamental factor and condition—both in the creativity of the individual, and in all of world culture as a whole. For instance, the humility of Abraham, as a conscious acquiescence in the will of Him Who Is, led to the emergence of the people of Israel and was at the same time both a creative act of Abraham himself, and an act of the divine will. By this means, humility, as submission to the supreme will, becomes an act of the theanthropic will, and thereby sanctifies any act of the personal will.

Fourth Movement
The specific nature of this prayer consists in its privacy. It is as if it were proceeding from the mouth and heart of the priest himself and is in essence a personal confession of faith. The prayer speaks of the two basic commandments of the Old Testament: “Thou shalt love the Lord thy God with all thy heart, and with all thy soul, and with all thy mind, and with all thy strength”; and: “Thou shalt love thy neighbour as thyself.” (Mark 12:30-31). At the same time, Father Alexander speaks clearly of the new commandment that Christ gave to His disciples: “A new commandment I give unto you, That ye love one another; as I have loved you, that ye also love one another.” (John 13:34). Therein lies the grace-filled power of this prayer, the power of love which comes from the Primary Source, love as a gift and an inheritance, love which binds the hearts of men in unity, as the Lord has loved them.

Fifth Movement
The dramaticism of this prayer unfolds in the realm of human interrelations. Father Alexander always believed that people cannot on their own, without help from above, overcome their numerous vices and spiritual flaws. The plea for the sending down of grace-filled help is the basic motif here.

Sixth Movement
The concluding movement of the symphony is a prayer of thanksgiving. It sums up, as it were, the experience of two millennia of Christianity. And at the same time, Father Alexander unfolds its content so that it is turned towards present-day Mankind, and makes the prayer a starting point. “Christianity, my friends, has only begun, it is a universal religion, for it a thousand years are but as one day. This is only the beginning, only the first steps.” (A.M.).

For Father Alexander, being a pupil of Christ meant a concrete and untiring participation in the transfiguration of the world in human hearts. As he himself said: “The disciples of Christ are they who have become fully reconciled to God and have received the seal of the Holy Spirit, they who together tread His path and whose mutual relations are based on an eternal and unshakeable spiritual bond—Christ Himself.” As it has been said: “He that abideth in me, and I in him, the same bringeth forth much fruit: for without me ye can do nothing.” (John 15:5).