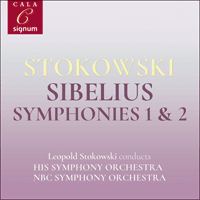 Leopold Stokowski’s 1950 recording of Sibelius’s first symphony, played by his hand-picked, multi-miked band of New York virtuosi, was acclaimed by The Gramophone: 'What energy and vigour! … conceived with a long view of the work’s architecture.' Four years later, Stokowski recorded the second symphony, the American Record Guide writing: 'This is musical fire-and-ice of the very first order and it is a joy to find that so supremely gifted an interpreter as Stokowski still thinks enough of it to give it his very best.'

The music critic Neville Cardus, when reviewing a concert of the Sibelius first and second symphonies, remarked that he would be happy to discard the later symphonies in favour of the first two. He was referring to the emotional impact of these early works compared to the more restrained glories of the later ones. Sometimes it is hard to disagree with this opinion, particularly when both symphonies are given such overtly romantic readings as those conducted by Leopold Stokowski on this CD.

Sibelius himself turned to the high priests of romantic music for his influences. With the first symphony, he sought guidance from the Russian school typified by Tchaikovsky. In the second, he reverted to an early enthusiasm for exalted Teutonic art, as typified by Wagner and Bruckner. But although it is fun spotting such influences as they appear in each work, we are misguided if we believe that Sibelius merely offers characteristics of other composers’ styles. The grandiloquent sweep of the great tune in the first symphony’s finale may sound like Tchaikovsky but the epic grandeur and fatalistic drama are pure Sibelius. What is remarkable is the degree of individuality in both works, from the haunting clarinet solo of the first symphony’s opening (apparently an afterthought added a year after the premiere) to the impassioned climax in the second symphony’s finale.

Besides considering the various influences on these two magnificent works, it is instructive to understand the origins of both. Already 34 when his first symphony was premiered in 1899, Sibelius was known for a number of nationalistic orchestral works heavily influenced by Finnish literature and landscape such as En Saga, Kullervo, the Karelia suite and the Lemminkainen legends.

Certain Finnish critics were, however, impatient with Sibelius for not writing an abstract symphony of the kind traditionally associated with the musical capitals of Europe. Sibelius must also have been disconcerted to learn that a younger Finn—a protégé of Max Bruch with the now forgotten name of Ernst Mieckle—had composed just such a symphony in 1898. Mieckle was barely 19 when he produced the first full-scale, non-programmatic symphony by a Finn.

His thunder stolen, Sibelius may well have been goaded to surpass his younger countryman, and within a year had written his own first symphony. Full of stirring themes and wild contrasts, it concludes with an ardent melody of romantic feeling and a twist in the tail which never ceases to amaze audiences. This symphony did the trick, both for Sibelius’s growing army of fans and the hard-boiled critics: he had 'arrived' in resplendent fashion. It was no coincidence that in its revised form the work was taken to Paris in 1900 by the Helsinki Philharmonic as evidence of an international symphonic expertise coming from the pen of a home-grown composer.

The second symphony appeared in 1902 but its genesis was almost the reverse of its predecessor. Sibelius originally planned a four-movement work based on the Don Juan legend. He took his family to Italy to pursue this aim but a serious illness affecting one of his daughters caused something a nervous breakdown in the highly strung composer. Returning to Finland, he reworked his sketches, discarded the non-musical programme, and delivered a forty-minute symphony which remains his most performed work. Something of the anxiety in the composer’s mind can be heard in the restless and impassioned first movement. The sombre slow movement retains themes first written down in Italy, while the hurtling scherzo, calmed by a solo oboe in the trio section, undergoes a transformation at its end not unlike that employed by Beethoven in his Symphony No 5, leading directly to the magisterial theme of the finale. Written immediately following the suicide of Sibelius’s sister-in-law, this theme was truly a triumph for Sibelius of artistic vision over life’s tribulations. Yet another tragic experience contributed to what was to become a hugely successful and emotionally uplifting work.

During his long career Stokowski championed many living composers and, in particular, Sibelius was foremost among them. In 1910, during his debut American concert season, Stokowski introduced the first symphony to his Cincinnati audiences. Two years later, now with the Philadelphia Orchestra, he gave the city its first hearing of the second symphony. Most notably, Sibelius’s last three symphonies received their American premieres in Philadelphia under Stokowski’s direction, No 5 in 1921, and Nos 6 and 7 both in 1926.

Stokowski and his Philadelphians made the first recordings of Finlandia (in 1921) and The swan of Tuonela (1929). This and a 1930 remake of Finlandia were best-selling 78s that helped to bring Sibelius’s name to the world. Stokowski also made the premiere recordings of the fourth symphony (1932) and violin concerto with Jascha Heifetz (1934). However, the latter remained unissued until the advent of CD, as did his recording of the seventh symphony, made in 1940 with his All-American Youth Orchestra.

Heard here is Stokowski’s 1950 recording of Sibelius’s first symphony (he re-recorded it in 1976 at the age of 94) played by his hand-picked, multi-miked band of New York virtuosi. Of its initial release on 78s (it was taped in roughly four-minute segments), The Gramophone wrote: 'The impression is of nobility … Stokowski plays it as superman music, as the utterance of Nordic heroes … What energy and vigour! … Conceived with a long view of the work’s architecture.'

Four years later, with the NBC Symphony Orchestra, Stokowski made his only commercial recording of Sibelius’s second symphony. The American Record Guide wrote: 'Stokowski conducts with superb attention to line and colour, availing himself of every last opportunity to limn the score with its inherently shimmering Northern Lights. This is musical fire-and-ice of the very first order and it is a joy to find that so supremely gifted an interpreter as Stokowski still thinks enough of it to give it his very best.'

Sibelius’s second symphony—A portrait in tone
Each time I go to Finland to conduct, I am struck by the immense strength and vitality of Sibelius as a man, also by his infinite range of thought, feeling and imagination, and by his closeness to Nature. When talking he is equally at home in Music, Philosophy, Religion or in the simplest things of Life. Just as Rembrandt, El Greco, and many other painters have made portraits of themselves in colour, so has Sibelius, perhaps unconsciously, made a portrait of himself in tone, in his second symphony. His music is like a song of all the people, and all the forests and lakes of his country. He sings the exotic oriental, and the exhilarating Northern spirit of Finland’s Life and Art … All this rich folklore, and Sibelius’s personal characteristics, are in his second symphony. Although in classical form, it is a free and rhapsodic expression of Sibelius’s inner life of feeling and fantastic imagination, it is the essence of Finland.

Sibelius retains the classical four parts of symphonic form, but fills them with utterly original and often explosive music. Great music always has great themes … this symphony has an inexhaustible variety of themes and moods, sometimes rustic, at other times like fantastic cries of Nature, rushing, impulsive waves of sound, like violent wind on the surface of a lake, or through the high trees of a forest … It is remarkable for the long lines and almost primitive simplicity of its themes, 'as if Nature were singing …'.

Typical of Sibelius is contrast of the savage with the tender, of the dark timbres with the brilliant, of the combining of a theme expressing both Fate and Hope, sounding in relief above a melancholy and monotonous background. Typical also the vast vistas of the final growth where all the themes combined lead triumphantly to the ultimate statement, which culminates the whole symphony with eloquent expression of human warmth, strength, compassion, love.