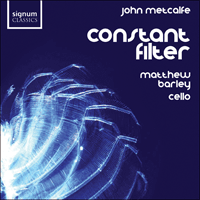 An exciting new collaboration between the rising British composer John Metcalfe and the internationally renowned cellist Matthew Barley. The project is summed up well by Barley’s description of the music: 'Metcalfe’s music fascinates me: it intelligently fuses acoustic and electronic soundworlds; it develops its themes with economic clarity; and—the main attraction—it speaks to the heart without ignoring the head. It can make me cry, laugh or dance, and that is what new music should be doing. I can hear the traditions of classical music, as well as contemporary rhythms and haunting synthesisers from the world of electronica. This is art that can speak to everyone about love and freedom, fear and yearning, and the deep mysterious joy of music.' Matthew Barley

'Most recently to be found helping Peter Gabriel transform the cover versions on Scratch My Back, John Metcalfe here furnishes cellist Matthew Barley with a series of pieces mostly composed for solo cello and electronics. Using computerised octave-splitters and delay units, Barley achieves a surprising depth of sound and harmonic richness, particularly on the title-track, where echoing wisps of electronic sound flutter around the cello like butterflies; Lonely Bay, on which the concentration necessitated by using a 40-second loop imposes a deep meditative calm; and The Appearance of Colour, where the slow accretion, note by note, of a single 25-note chord produces an imposing serenity' (The Independent)

'The result is compelling, and at times extraordinary—Metcalfe’s lyrical, contemplative lines are drawn with infinite care, and the immediacy and tenderness of Barley’s performance makes this music addictive' (The Strad)» More

In 2006 I commissioned John Metcalfe to write a piece for cello and electronics for a UK tour—I hardly knew John, but had listened avidly to his first album, Scorching Bay, and had been impressed. When a new piece arrived in the post I duly listened and was thrilled by what I heard. It was the title track, Constant Filter, and what struck me was that it had emotional impact in a way that was both honest and innovative: it was original, sophisticated and immediate—not an easy combination to find. In that track I especially love the combination of the acoustic cello sound and those other-worldly electronic pulses that hover and fly around the second half of the piece.

The opening piece on the album, Tracing The Outline, was written in 2009 and is a suite of six movements exploring the interval of the fourth (think of the shift between the syllables in italics in Happy Birthday: Happy Birth- day to You). I think of this interval as open, simple and clear—it is one of the two so-called perfect intervals along with the fifth. It also has connotations of sacred music, and the outer movements of the piece have that quality. The intervals are almost always supplied by computer, so I play a cello line and computer processing adds a note a fourth below—if I am playing two notes, it creates wonderful lush four-note chords. Movement 1 is gentle and song-like and sets the atmosphere for the whole piece; Movement 2 is dance-like using a lot of plucked notes, with the computer not only supplying the note a fourth lower, but delaying it by half a beat, creating plucked sequences that sound unplayable; Movement 3 is an exuberant celebration of harmony and texture; Movement 4 is almost funereal with a melody that climbs high up the cello before falling gently back to the pulse of the steps from the beginning; Movement 5 (nicknamed Mission Impossible by John) is one of the hardest things I’ve had to play for a long time (most of John’s music is either sight-readable or impossible): with each very fast beat divided into four, I have to play the first two notes of each beat, and the computer then plays them back (a fourth lower of course), and so on, but the pace of it makes it a mixture of exhilarating, confusing andexhausting to play. Movement 6 echoes the serenity of the opening, and closes the suite with a sigh that vanishes into stillness.

Written this year, Kite is for cello and piano with a hint of electronics, and is in five movements: Appear, Land, Centre, Parsal and Tree. Like Tracing The Outline, it opens and closes with slow contemplative movements, while Land is another one of John’s deceptive on/off beat pieces. As soon as you think you know which instrument is on the beat, it changes, and it reminds me of certain optical illusions where you think you have understood what you are seeing, and you refocus your eyes and it changes. Do you hear it as two instruments playing alternating fast notes, or one instrument playing a single winding melody? Centre, for piano alone, is a little still oasis in the middle of the piece, and Parsal is full of virtuoso plucked cello melodies, with the piano insisting on its pattern throughout the movement. Tree takes the suite into a plane of almost disembodied sound, where you shouldn’t even be sure if one of the sounds is a cello.

Lonely Bay with its evocative title was written for and commissioned by cellist Peter Gregson—it uses looping technology so that whatever I play comes back 40 seconds later. I have to place my notes, and then listen to see how and where to place subsequent entries. It feels like chamber music in this respect, and turns out radically different every time as you can never predict how the sounds will stack up.

Originally for solo piano, As She Fell is an elegy written for the death of John’s mother.

The Appearance of Colour was composed for a performance in a Cathedral and is filled with the serene grandeur of those buildings. This extraordinary piece is essentially a chord of around 25 notes that takes 8 minutes to build up from a single slowly rocking A to G. Even recording it, painstakingly note by note, trying to find exactly the right colour and beginning for each sound in the chord, I was amazed by the simple power of musical harmony. The great skill in the composition of the piece is obviously the choice of notes, which could so easily make an incomprehensible soup, whereas the magnificence of the soundscape at the end seems to express something universal (the appearance of colour as light?) and beyond everyday human experience.

It is also all about vibration: from the tiniest—the bow hair exciting the string with its thousands of minute fibres, the vibration of vibrato on a single note; a two-note figure rocking backwards and forwards; all the differently shaded chords throughout the piece—to the huge seven-octave-span vibration at the end. Best enjoyed in a darkened and quiet room at a moment of the day when nothing at all is pressing on your mind.

Acoustic v. Electronic?
Some people profess to like either acoustic or electronic music, thereby missing a wonderful world—that created by the blend of the two. This is the sound-world of most of this collection of pieces, and one which fascinates me. Electronic sound can often represent something machinelike and impersonal (even if intensely beautiful and expressive of other emotions), and there are few sounds so human as the cello—the mixture of these two worlds is one of the things I find so touching about John’s music. It seems to speak from a human place in a technological world, and bring a warmth to the world of electronics.

Recording Constant Filter
Over 10 years ago I decided to record something at home, because I was so drawn to music technology and its creative possibilities for sound manipulation. I bought some equipment and the plan was to collect some repertoire, maybe improvise a little, and build up a collection of tracks. Of course I never made the time to do this, as life has always been too busy, and the years went by until I started to build a repertoire of pieces by John. It was the ideal project for me to record at home, and it was very exciting to finally begin—three equipment upgrades later—at the start of 2010. It was a vertiginously steep learning curve. I was engineer, producer, editor, and computer sound-designer—not to mention cellist. Logic 8 was the software of choice (with its insomniac-cure manual of over 1000 pages). While committing to a project was the only way I was ever going to carve the time to get this dream going, it was incredibly difficult at times as I had so much to do for a recording where the timescale was cast in stone. There were many late nights, abandoned family members, moments of techno-despair and empty brain, but also a wonderful sense of exploration and the joy of working with music I loved, learning new skills, and being right in the middle of creating a whole world of sound and colour. From choosing the right gear and learning impenetrable audio terminology from tweakheadz.com (very amusing), to handing over files for mastering, took seven weeks.

Firstly, my thanks go to my family for being quiet in the house for days on end, and giving me time and space. And I would like to thank Mike Hatch for his advice and patience, and Alex Foster for the same, as well as Steve Long and the crew at Signum. Of course huge thanks go to John Metcalfe for writing this amazing music, and always being on the end of the phone when nothing was working. Thanks too, to Peter Gregson for introducing me to the reverb—from the Indian tomb of Gol Gumpaz—that I used on Lonely Bay—‘the richest reverb in the world’. I would like to dedicate the disc to the Yawanawa people of Brazil who—along with their frogs—taught me some valuable lessons just before I recorded.

On this project with Matthew Barley, John Metcalfe writes: 'I was so flattered when Matthew first approached me for a commission. I had been a huge fan of his extraordinary musicianship for some time and conversations with him revealed a kindred spirit of musical adventure coupled with such soul and amazing energy! This album was a wonderful opportunity to explore with Matthew a sound-world that merges the deeply human voice of the cello with the ‘other-world’ emotions that electronics can provide. Matthew understands the role of both implicitly and imbues his performances with a beautiful clarity and passion.'