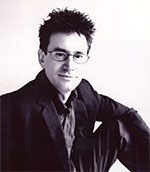 born: 6 August 1964
country: New Zealand
From his early days in New Zealand listening to his father sing opera, John Metcalfe has become one the most exciting and versatile musicians working in the UK today. From giving string quartet recitals in prestigious venues world-wide to composing for radio and TV, penning strings for No 1 UK pop hits and releasing his own genre-defying music, Metcalfe has gained wide recognition for his unique brand of music-making.

Moving to England he took up the viola aged 10 and joined his first band at school playing drums. Raised on a dual-mono diet of Kraftwerk and Joy Division this band influenced his move north-west where he joined cult band The Durutti Column on Manchester’s legendary Factory label. He stayed for three years adding his own unique sound and flavour to the enigmatic style of guitarist Vini Reilly.

Hard classical study continued along with hard dancing at the now defunct Hacienda and scholarships took him to London and Berlin (studying with Italian maestro Bruno Giuranna) to finish his training. His distaste for classical recording industry practices led him to persuade Factory boss Tony Wilson to launch the groundbreaking Factory Classical label aimed at bringing young British talent and music to a truly new audience.

Metcalfe’s talents at A+R led to debuts for now major artists such as Rolf Hind, Steve Martland and his own Duke Quartet. In the meantime Metcalfe’s strength as a string composer for bands came to the fore.

Since his work on Morrissey’s No 1 solo album Viva Hate he has become one of the UK’s top arrangers working for artists such as Simple Minds, The Corrs, Blur and Catatonia. He provided all the strings for the Concert for Linda at the Albert Hall, working with George Michael, Johnny Marr and Tom Jones. After hearing his arrangement of Angel in The Morning for the Friends soundtrack, the Pretender’s Chrissie Hynde asked John to arrange some of her most famous songs for the Isle of View album whichfeatured John’s string quartet, the Duke.

In addition he is one of the major curators at Kings Place with outstanding sell out events throughout last year. His most recent, ‘Beyond the Loop’, featured some of the most influential and innovative classical and electronic artists from the last 30 years such as Plaid, The Duke Quartet and the Durutti Column. The event concluded with the astounding Bays/Heritge Orchestra collaboration featuring live composing from Metcalfe himself and Toni award winner Simon Hale.

Metcalfe made his first steps as a composer nearly a decade ago. His debut album ‘The Inner Line’ received glowing reviews. Billboard magazine described it as ‘ …a solo debut that crosses all manner of boundaries. Melding avant-pop and electronica, film music and contemporary classical The Inner Line is the ideal item for classical fans wanting to investigate a pop-leaning, contemporary sound world or for electronica fans who crave far more musicality than they’re used to getting.’

February 2010 saw the release of ‘Scratch My Back’, an album of covers by legendary performer Peter Gabriel. Metcalfe was closely involved in helping Mr. Gabriel re-interpret twelve covers of major artists ranging from David Bowie to Paul Simon using only orchestral instruments. Mojo magazine called it “A profound re-imagining made manifest in an orchestral soundworld as rich and thrilling as ever recorded at Air, the studio founded by George Martin”. Concerts followed at major venues including Radio City in New York and the Hollywood Bowl.