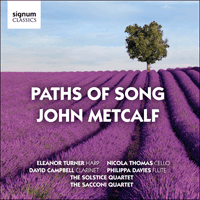 'Some truly moving and uplifting moments … Benefiting from an agile and assured performance by harpist Eleanor Turner, who shines throughout the recording, Metcalf's lyricism is at its most expressive when such musical journeys are heard to return home' (Gramophone)
'Landscape and the spiritual elements of journeying inform much of the music of John Metcalf, particularly the hills and valleys of his native Wales, both literally and when reinterpreted by painters. Paths of Song is a continuous piece for string quartet in five sections, each taken at a walking pace. As with Mapping Wales and Septet, also recorded here, the music is lyrical, melodic, good-natured and benign. That might suggest it's all charm without challenge, but it would be a mistake to assume that. There is some really fine, accessible writing here' (The Observer)

Septet for harp, flute, clarinet and strings
My Septet was written in response to a commission from Antony Griew for a work in honour of his parents. There was no specific brief, though I did talk with Antony about the family and the characteristics of his parents. He mentioned that he was fond of the flute; so it was decided that this instrument would be included, and shortly after, we agreed on the same ensemble as the famous Introduction and Allegro by Ravel. A first version of the piece was completed for a private performance for family and friends at Compton Verney, Warwickshire on 17 May 2008. I subsequently revised the work in November and December of the same year.

Because I didn’t know David and Ann Griew personally, I decided that the best approach would be that the piece should honour parents in general, and I opted for a musical structure that would reflect this. A series of diatonic chords characterised by a consistent stepwise descending movement are common to the work as a whole. They are, as it were, the DNA of the piece, and the variations that derive from them display the family likenesses. In the first version of the piece, the chords were not heard, but in the process of revision, I decided to include them. They are heard at the outset replacing a prelude (that was in the earlier version) and again at the end.

The opening statement of the chordal sequence is very short, chorale-like in nature. Much of the other music around the central Calmo is lively and very rhythmic and the harp part is virtuosic.

Many pieces of music have ‘hidden’ mottos built around letters and initials. The opportunity to ‘encrypt’ the initials of his Antony, his wife Dot and parents David and Ann Griew—an AG/DG motif in musical terms—seemed too good to miss. This tribute and simultaneous thanks to the commissioner can be heard at the end of the Largo movement. After a loud climax the music dies away to a series of quiet chords very high up on the string instruments. Immediately after, the motif can be heard on solo violin answered by the flute.

Llwybrau Cân (Paths of Song)
My interest in the idea of travelling (the concept not the actuality) has been long-lasting and much of my music reflects this, including the early opera The Journey and the music-theatre work The Crossing (which is set on an ocean liner). More specifically even, at the beginning of the 1990s I became fascinated by the idea of walking. This is also reflected in my work, in pieces like Rest in Reason, Move in Passion (1993) and Transports (2000) and the interest was further developed when I read Bruce Chatwin’s Songlines and became familiar with the music of Kevin Volans and Peter Sculthorpe. In their work the journey is a spiritual as well as a physical exercise, a concept familiar from pilgrimages to ‘walkabout’.

I have always been keen, however, that this exploration should happen in my own context. I knew directly from Canadian experience of the dangers of cultural expropriation from native traditions—cultures which many would say have retained richer and broader points of reference than contemporary western society. I was helped in this by the travels in Wales of the artist Catrin Webster who I worked with on Transports and whose collection of paintings of the same name inspired my own Mapping Wales. It was also helpful that my music, though primarily melodic, is often driven by pulse. I had written one previous work built on a single tempo throughout—Line Dance for String Orchestra—and decided that I would take a similar approach with the present work.

The piece is built, appropriately, on a walking pulse. It is a brisk walk (crotchet = 116) and the pulse is clearly signalled at the outset by a long series of repeated chords. As the work progresses polyrhythms and varied textures mask it, but it is ever present. Indeed, I had intended that it would be very much to the foreground throughout as in, for example, Andriessen’s De Snelheid. But the work evolved in a different and, for me, surprising direction.

There are five sections all, of course, in the same basic tempo but each having a clearly differentiated musical character: Andante: Estatico: Calmo: Scherzevole: Cantabile.

The opening Andante section is characterised by repeated chords. It soon broadens out and leads via a dramatic modulation to the Estatico section. Here there are proliferating ‘songlines’ for all the players and the texture is very full. After a dramatic climax high on all four instruments the music slows for the Calmo section. This is clearly identified by a soaring melody on first violin. To this point in the piece all the music is very sustained and there are few rests. By contrast, there follows a Scherzevole section with broken texture, playful writing and rapid alternation between pizzicato and arco playing. This section effectively has two expositions of the same material, though the ‘join’ is masked. The final Cantabile refers back to the ideas of all the previous sections but, as it progresses an even broader melody—which seems to me to affirm once again the healing power of music—asserts itself, before the work comes to a light and airy conclusion.

What is surprising about this is that, having set out at the beginning of the work on a path of discovery to nowhere in particular, I find, at the end, that I have in effect written a single movement ‘symphonic’ work with identifiable opening and closing faster sections and in between a slow movement and a scherzo (albeit all in the same tempo). Maybe the old adage that all stories end in either a marriage or a death is also, after all, true.

Castell Dolbadarn
At first sight the commission to write a short work for cello inspired by the painting of Dolbadarn Castle by JMW Turner seemed interesting and relatively straightforward. It certainly proved interesting, but the realisation of the work was not as easy as it first appeared it might be. In particular, I was keen to reflect the structure as well as the atmosphere of the painting. Turner is, of course, arguably the greatest of British landscape painters, but his work is already atmospheric and impressionistic. Although music can well amplify these qualities, I was keen to relate to the subject matter on an additional, more structural, level.

What this level might be was not immediately clear. The clue came, however, at an exhibition of another painter: a superbly curated exhibition of the work of Vuillard, which I was fortunate enough to see in Montreal. As well as preparatory drawings for paintings, there were sometimes two or three versions on the same subject. Although there is only one painting of Dolbadarn Castle by Turner, I decided to take this approach—drawn from the visual arts—in writing the music.

I began with a set of 36 chords, like a sketch or outline for the composition. Having divided the chords into three equal groups, I composed a study with the first 12 chords. I then replicated the exact rhythms, dynamics and all musical features of the first section using notes derived from the other two sets of chords to create three separate studies to be performed as a whole without a break. Though this sounds like quite a technical approach, the result will be, I believe, clear to the listener. Each section begins quietly in a low register, builds to a climax and dies away—like an image seen from dawn to dusk. Three pictures of the castle emerge, each with the same essential features but viewed, as it were, at different times and in different weather conditions. The beginning and ending of each of these images can be clearly perceived. The modal nature of the music also helps to define the qualities of both the piece and the painting—simultaneously sombre, tranquil and majestic. Because of the particular nature of the musical construction, I was very keen that the music for the two instruments be as dramatic and idiomatic as possible, and I am grateful to the two performers Elinor Bennett (harp) and Nicola Thomas (cello) for their help in the final editing of the piece.

Mapping Wales
Mapping Wales (Endless Song) is a set of variations played continuously. The theme is the short original piano work entitled Endless Song (1999). Aspects of the theme are heard throughout the work and the song is first heard in entirety at the end of the piece.

The title refers to the journeyings and paintings of Welsh artist Catrin Webster and draws similar inspiration from the landscape of Wales and from metaphysical ideas connected with travelling. The piece is just under 20’ minutes in length. Various works by John Metcalf—Dances from Forgotten Places for String Orchestra, for example—have explored aesthetic areas not commonly associated with contemporary art. Similarly, the mood of Mapping Wales is both tender and pastoral.

It was commissioned to mark the Millennium by Lampeter Music Club, the composer’s local music society, with funds made available in part by the Arts Council of Wales and received its premiere on October 17th, 2000. The harpist Elinor Bennett who gave the premiere offered help and editorial suggestions with the preparation of the solo part.