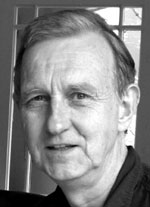 born: 1946
country: United Kingdom
Swansea-born John Metcalf has been central to the Welsh musical landscape since the 1970s and is one of its most individual composers. In the early 1990s he developed a personal voice in which an often beautiful, melodic surface is controlled by underlying structures of considerable technical rigour. He has written six operas, including two for Welsh National Opera, and many large-scale orchestral and chamber works. His seventh opera, based on Dylan Thomas’s Under Milk Wood, is an international cocommission from the Taliesin Arts Centre, Swansea and Companion Star, New York. While John Metcalf’s cultural roots are in the heart of Wales, his work has a broad international following and is represented in a growing catalogue of recordings. As well as his work as a composer, he is also Artistic Director of the Vale of Glamorgan Festival (Wales’s only festival devoted entirely to the work of living composers). In 2009 he received one of four inaugural Creative Wales Ambassador Awards from the Arts Council of Wales. The awards recognise artists’ achievements, their standing in the arts in Wales and their capacity to push the boundaries of their art inherently as form and as a point of contact with contemporary Wales.