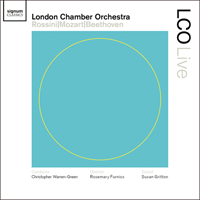 The London Chamber Orchestra, the UK’s oldest chamber orchestra, has nurtured the new and paid homage to the traditional since 1921. Since 1988 Principal Conductor and Music Director Christopher Warren-Green has brought together the inspirational musicians and repertoire for which LCO is renowned. The remarkable acoustic and intimate ambience of St. John’s, Smith Square, its London home, enable the LCO—the only chamber orchestra resident in London—to give vibrant performances and establish a close rapport with its audiences. The recordings on the LCO Live label, in partnership with Signum Classics, are the result of this happy marriage of orchestra and venue.

Rossini la scala di seta: Overture
This dazzling curtain-raiser to an otherwise unremarkable one-act-opera is the first of Rossini’s well-known contributions to the genre which he would refine and raise to a peak of dramatic sophistication in the overture to William Tell, which is practically a tone-poem prefiguring Liszt and Wagner. He largely did away with the old idea of a pocket-book of the opera’s best tunes; hardly any of what is played here recurs in The Silken Ladder itself. The overture stands on its own two feet, with an introduction, the presentation of two themes and their recapitulation like a condensed form of a classical symphony movement. Listen beyond the whirl of vitality and there are quirks aplenty, not least in the oboe melody which starts, loses its way and then retraces its steps, a joke that is well worth hearing more than once.

Mozart Symphony No 1 in E flat major K16
On the evening of 13 September 1764, Leopold Mozart was sniffling in a large house not two miles away from St. John’s, Smith Square, where this recording was made: 'I must tell you,' he writes home to a Salzburg friend, ‘that in England there is a kind of native complaint, which is called a ‘cold’’. The family had moved out to what was then the leafy suburb of Chelsea so that Leopold could rest and recover: the two children were forbidden to disturb him with noise, musical or otherwise. So, Mozart’s sister Nannerl related later, 'Mozart composed his first symphony with all the instruments of the orchestra… I had to transcribe it as I sat by his side. While he composed and I copied he said to me, "Remind me to give the horns something worthwhile to do!"'

If this is the symphony (only circumstantial evidence and our own yearning for a good story will tell us so), Nannerl was a dutiful sister, for the slow movement is distinguished by the first appearance in the horns of what would become Mozart’s motto theme, C-D-F-E. During the following 24 years it turns up in all sorts of odd corners before crowning the ‘Jupiter’ Symphony as the main subject of the finale’s great fugue. Even Mozart wasn’t up to that level of extended counterpoint at the age of eight, and having discovered the idea, he is content to reiterate it, to poignant effect, in one key after another over a gentle cushion of strings.

Mozart had just discovered the music of the ‘London’ Bach, Johann Christian, noted for his development of the infant symphonic form from its origin in exuberant operatic overtures. That his was a quick study is plain from the outer movements, which are all hustle and bustle, going nowhere very fast but having fun en route by deriving grand gestures and sudden contrasts from their little arpeggio ideas.

Mozart Le nozze di Figaro K492
Another woman spurned: the wife of the priapic Count who is attempting to exercise his ‘droit de seigneur’ over Figaro’s fiancée, Susanna. There is no rage in the Countess’s bewilderment but rather the resignation, mingled with desperation, of a woman of the world whose dignity and self-possession hang by a slender thread. They are ambivalently reaffirmed by the opera’s climax, when the Count is forced to kneel and seek forgiveness from his wife in front of his household, in a scene of profound, socially charged pathos. In the meanwhile, the supplicatory note of the Countess’s pleas for the restoration of domestic harmony is intensified by Mozart’s recycling, for Dove sono, of the Agnus Dei from his ‘Coronation’ Mass, written in 1779, five years before Figaro.

Mozart Adagio and Fugue in C minor K546
Mozart enclosed a prelude and three part fugue in a letter to his sister, Nannerl, dated 20th April 1782. He explained that he composed the fugue first and wrote it down whilst thinking out the prelude!

He explained that his new wife, Constanze, was the cause of this fugue’s coming into the world. ‘The Baron von Swieten, to whom I go every Sunday, has let me take all the works of Handel and Sebastian Bach home, after I played them through for him. When Constanze heard the fugues she fell quite in love with them. Now she will hear nothing but fugues, especially … nothing but Handel and Bach Now, since she had heard me frequently improvise fugues, she asked me whether I had ever written any down, and when I said 'no', she gave me a proper scolding for not recording some of my compositions in this most artistic and beautiful of all musical forms, and she did not give up begging me until I wrote her a fugue.’

Mozart originally wrote the fugue as a piece for two pianos in 1782 (K426). When cash was tight in 1788, Mozart had the idea of reworking the fugue and adding a prelude. It was published in the autumn by Hoffmeister.

This period was one of the most extraordinarily creative in any composer’s life. He entered his last three symphonies in his catalogue between the end of June and the beginning of August. In addition there were piano trios, piano sonatas and this Adagio and Fugue.

The result is a disturbing, dark, angular piece. Girdlestone describes the adagio as ‘harrowing’ and the four part fugue as ‘of great beauty but almost as enigmatic as Beethoven’s Grosse Fugue’. It gives an insight into Mozart’s mind at a very difficult time of his life.

Beethoven Ah! Perfido Op 65
Ah! Perfido looks backwards in text and models and forwards in what Beethoven does twith them. The text is partially by Pietro di Metastasio (1698-1782), doyen of librettists for the formal kind of opera seria which was already falling out of fashion when the 21-year-old Mozart wrote Idomeneo, his first operatic masterpiece. In 1796 Beethoven was wrestling with operatic ideas that would only find fruit in Fidelio a decade later, but he also evidently learnt from Mozart’s concert arias how to shape a formal lament without the encouraging sniff of greasepaint. Indeed, once past the formal exclamations of the recitative, the aria alternates compassion and fury with an ambition that looks beyond the innovations of Gluck towards an embrace of feminine sympathy that would, half a century later, become synonymous with Verdi in characters such as Violetta.