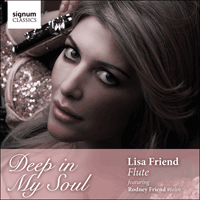 Deep in My Soul

Lisa Friend started the flute age five. At sixteen she studied in New York with flautist Renee Siebert of the New York Philharmonic. She was awarded a flute Scholarship to study with Julius Baker in Connecticut. At seventeen, Lisa won a Scholarship to the Royal College of Music. Twice winning the Martin Music Scholarship enabled her to study at the Paris Conservatoire with Alain Marion and Ida Ribera.

As soloist, Lisa has appeared with the Philharmonia Orchestra, the Prague Philharmonic, the Liverpool Philharmonic and toured throughout the UK, France, Germany, Japan, China and the USA. Other solo appearances include BBC ChildLine, a concert for Royal Family at Buckingham Palace as soloist with the late Yehudi Menuhin, the Britten theatre with the late Sir George Solti and for Steven Spielberg after writing and performing a track for his foundation SHOAH. Lisa was also soloist for the Bill Kenwright production Music 2000. She has given live recitals for Classic FM and Radio 3. Live television has included Brandenburg 5th Concerto in Spain with her father the International violinist Rodney Friend.

Dmitiri Shostakovich Duo
Shostakovich studied at the St Petersburg Conservatory in 1919. In 1926, his first symphony was performed in Moscow and Leningrad. He then continued to produce a variety of much loved music including solo, chamber, symphonic and operatic works. However, many of Shostakovich’s finest works were written for smaller instrumental ensembles. Shostakovich’s charming duets Praludium, Gavotte and Walzer were written for two violins and piano and were arrangements of excerpts from his theatre and film music.

Lisa Friend / John Haywood Deep in my soul
Influenced by the passionate nature of the flute and her love of romantic film scores, Lisa was inspired to compose works that drew upon these characteristics and embarked on composing works such as Deep in my soul.

Camille Saint-Saëns Air de Ballet d’Ascanio
The Air de Ballet was taken from the third act of Saint Saëns’ opera Ascanio, written in 1890. The opera premiered on the 21st of March in Paris. The French flautist Paul Taffanel received a standing ovation after its first performance with the Paris Opera Orchestra. The work did not see a revival until 1921, the year of Saint-Saëns’ death. It has remained a popular work for flautists since the 1900s.

Ennio Morricone Medley
Ennio Morricone has composed some of the most famous scores for film, and he is considered to be one of the most influential film composers since the 1950s. The Medley was arranged from a love of Morricone’s works and includes themes from great scores such as La Califfa (1970), Love Affair (1994), Once Upon a Time in America (1984) and Cinema Paradiso (1988).

Sergey Rachmaninov Vocalise, Op 34, No 14
The Vocalise Op 34 was published in 1912 and was the last of Rachmaninov’s 14 songs written for voice and piano. It was dedicated to the Soprano Antonina Nezhdanova. Its popularity is so great that it has been arranged for a variety of solo instruments.

Edward German Romance
Edward German was born in Shropshire, England. After graduating from the Royal Academy of Music he became a successful theatre conductor and composer. German’s music enjoyed great success in the late Victorian and Edwardian periods. The Romance dates from his early years and was originally one of a pair, sadly of which the other one was lost.

Robert Schumann Three Romances, Op 94
Robert Schumann was a German composer and pianist. It was in December 1849 that he wrote his ‘Three Romances’—Nicht Schnell, Einfach, innig and Nicht Schnell for solo oboe and piano. After the romances were published in 1851, they entered the repertoire of concert oboists throughout the world. The ‘Three Romances’ have since been acknowledged as being some of the greatest works for oboe from the romantic period. Due to its popularity, this piece has been arranged for numerous instrumental combinations.

Camille Saint-Saëns Romance, Op 37
The Romance was written for the French flautist and teacher Paul Taffanel in 1871. Saint-Saëns had a passion for writing for woodwind instruments and was a close friend of Taffanel himself. A popular version of Romance, Op 37 also exists for violin and piano.