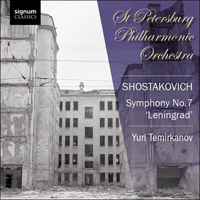 The St. Petersburg Philharmonic Orchestra, Russia's oldest symphonic ensemble, was founded in 1882. In 1988 on the initiative of the orchestra, Yuri Temirkanov became the principal conductor of the most famous national orchestra. So began the 'Temirkanov era', the period of collaboration with one of the most sought-after conductors of our times. He widened the orchestra's repertoire and took them on tour to Europe, Japan and the US where they became the first Russian orchestra to perform at the opening concert of the season in Carnegie Hall. In March 2009 the orchestra inaugurated the recording studio of the St Petersburg Philharmonia with a performance in the Great Hall of Verdi's Requiem which is also available on Signum Classics. Shostakovich Symphony No 7 is the second release with the St Petersburg Philharmonic Orchestra and we look forward to future releases including Prokofiev's Cinderella.

As a 27-year-old, in 1934, Shostakovich had a runaway, worldwide success with his opera, Lady Macbeth of the Mtsensk District, which was regarded as a highwater mark in Soviet opera and praised by the authorities as ‘the result of the general success of socialist construction’. In 1936, with the arts now under the centralized control of the All-Union Committee on Artistic Affairs, the tide was turning against any composers whose works did not appeal directly to the masses. Stalin attended a performance of Lady Macbeth in January of that year and was offended by the forthrightness of the subject matter and confused by Shostakovich’s advanced musical language. Two days later, the now notorious Pravda editorial appeared describing Lady Macbeth under the headline ‘Muddle instead of Music’ as a ‘discordant, confused stream of sounds… the music cracks, grunts and growls’. A few days on, his ballet, The Limpid Stream fared no better under the banner, ‘Balletic Falsehood’. Although now seen as preposterous and philistine, at the time these were unprecedented articles. Pravda, the official organ of Soviet Communism, disapproved in language verging upon the violent; the ‘cheap clowning’ of Lady Macbeth being chillingly described as ‘a game of clever ingenuity that may end very badly’. The party had spoken—this music was not to be imitated and the works in question disappeared from the repertory forthwith. Nobody in the Soviet Union was immune to Stalin’s Great Purge in the years immediately preceding the Second World War. Neither the poorest citizen-comrade nor the highest ranking party official could escape Stalin’s clunking fist as he sought to consolidate power by ‘cleansing’ the Communist Party, and the country at large, of so-called dissidents, undesirable anti-revolutionaries and other ‘enemies of the people’.

By the time the Second World War came to Shostakovich’s doorstep, he had regained some respect amongst the Soviet authorities and could even command a position teaching at the Conservatory. But he still had to watch his step. With the Nazi invasion of Russia in June 1941, the composer tried to enlist in the Red Army, but was rejected seemingly due to his rather poor eyesight. That he was also one of the most famous composers in the land may have swayed the judgement of the Communist Party elite. On 8 September 1941 the Axis powers had arrived to capture Leningrad on their march toward Moscow. The Siege of Leningrad, which was to last until 1944, with little respite, is remembered as 900 days of hell; one of the most horrifyingly protracted, savage and bloody campaigns in modern history. For the first 18 months of the siege, Leningrad was blockaded completely in an effort to starve the city and its people into submission. Although ultimately unsuccessful, the siege was as much of a loss to the victors as to the vanquished. The true number of casualties may never be known, and the figures are forever being revised (mostly upwards), but it is estimated that somewhere between a third and a half of the city lost their lives to heavy air raids, fire-bombing and the silent killer—starvation.

Unable to defend his city in the service of the military, Shostakovich instead volunteered as a fireman, devoting his free time to writing and arranging patriotic songs. Much of the Symphony No 7 in C Major, Op 60, dedicated to the city of his birth was also written during the invasion of Russia and the Siege of Leningrad:

Never in my life have I dedicated my compositions to anyone. But this symphony—if I succeed in its realisation—I shall dedicate to Leningrad. For all that I wrote in it, all that I expressed in it, is tied up with that beloved native city of mine, is connected with the historic days of its defence against fascist oppressors.

Shostakovich had, in fact, dedicated a number of previous compositions to individuals, including his Cello Sonata in D minor, Op 40 (to the cellist, Viktor Kubatsky) and the controversial opera, Lady Macbeth (to his first wife, Nina Vardaz). But such a caveat is hardly one that can enter into the realms of the usual arguments that bedevil Shostakovich’s life and music—namely to what extent was he either a silent but willing servant of the Soviet Union or a musically vociferous critic of the regime’s horrors. It’s clear that Leningrad was dear to him and he was certainly amongst the last artists to leave the city when life became unbearable. It is less apparent just when the famous opening movement was actually conceived. Some push its genesis as far back as 1939, around the same time as the completion of the Sixth Symphony, while others posit the middle of July 1941 as the date he began work. Much of the argument here lies in the massive movement’s famous ‘invasion theme’—a short march repeated a dozen times with increasing tension. This ‘war machine’ crescendo replaces the traditional development section and baldly states the theme over and over with the only actual development being in the orchestration which drives the march into frenzy by accumulation, not 6 only through instrumentation, but by an increase in dynamics and accentuation. The popular idea has it portraying the Nazi invaders marching on Russia and Leningrad. It has also been thought of as depicting the horrors of Stalinist rule, or indeed the terror visited upon the masses by any fascist or totalitarian regime. Evidence that both Hitler and Stalin may be targets rests on musical quotation within the march theme. The second half of the march is most likely a parody on an aria from one of Hitler’s favourite operettas, Die lustige Witwe (The Merry Widow), the opening of the march resembling moments in the libretto of Lady Macbeth considered to be connected with tyrannical behaviour. Shostakovich described the section succeeding the ‘invasion’ music as the central focus of the movement as a ‘requiem for the heroes who died for us’ in his notes on the occasion of the symphony’s first performance.

What does seem fairly certain is that the first two movements were completed about a week after the Leningrad Blockade began. On 17 September 1941 Shostakovich broadcast the following via Leningrad Radio:

An hour ago, I finished the score of two parts of a large symphonic composition. If I succeed in writing this composition well, if I succeed in completing the third and fourth parts, then it will be possible to call this composition the Seventh Symphony. Why do I announce this? So that the radio listeners who are listening to me now will know that the life of our city goes on as normal. We are all now doing our military duty. Soviet musicians, my dear and numerous brothers-inarms, my friends Remember, that our art is now in great danger. Let us defend our music, let us work honestly and selflessly.

Whether this was merely broadcast by Shostakovich, rather than written by him, may never be known, but the composition of the rest of the symphony appears a little less clouded by the mists of time or politics. The third movement seems to have been completed prior to the evacuation of Shostakovich and his family to Moscow on 30 September 1941, and the final movement finished in Kuybishev by 27 December, in living conditions which were far from favourable to the composer. The world premiere of the symphony took place in the same location by similarly displaced members of the Bolshoi Theatre Orchestra under the direction of Samuil Samosud on 5 March 1942. A few weeks later Samosud introduced the work to Moscow and by radio to Russia and the world. The work quickly became known and mythologised as a great symphony for the times, an anti-war conception which extolled the indomitable spirit of man and Leningrad and, as the American poet Carl Sandburg opined, was music ‘written with the heart’s blood’. The race for the Western world’s first performance of this heroic work was made the more urgent and exotic and by the microfilm copies of the work taking a circuitously exciting, James Bond route out of Russia to the West, via locations such as Tehran, Cairo, Casablanca and (oddly) Brazil. Major conductors in the U.S. vied for the honour of performing it, including Koussevitsky, Rodzinski and Stokowski—Toscanini eventually winning out with a broadcast on 19 July 1942. But, not before Henry Wood trumped the lot by performing the symphony with the London Philharmonic orchestra a month earlier.

However, the most affecting performance was always going to be when the symphony returned to Leningrad. It did so on 9 August 1942 with the much depleted Leningrad Radio Orchestra being bolstered by musician soldiers summoned back from battle and conducted by Shostakovich’s fellow student at the Petrograd Conservatoire, Karl Eliasberg. The mighty General Govorov marshalled attacks on enemy gun positions, executing the specially planned Operation Squall, so that the symphony might not be interrupted. Loudspeakers relayed the performance not only throughout Leningrad, but were also targeted directly at the blockading foe in an interesting move into psychological warfare. Whether music is mightier than fire-bombing is debatable, but the impact of the symphony, the mere idea of it allied with its subsequent plethora of performances no doubt stirred the blood, and strengthened the sinews of the war effort.

The symphony remained popular throughout the war years, becoming a valuable propaganda tool not only in Russia, but among many of the Allied nations. In the United States alone, it was played over sixty times in the year following its premiere. The flurry of performances dried up pretty much as soon as the war was over—almost as if the piece had somehow outlived its usefulness. Shostakovich began to receive criticism at home and abroad and before long it had all but disappeared from concert programmes, most especially in the West. Criticized for being naïve, crude and bombastic, the once loved symphony was derided by composers such as Virgil Thomson while Bartók famously lampooned the ‘invasion’ theme in his Concerto for Orchestra. However, since the late 1970s the Seventh Symphony has come back into the canon and is once again a regular on the concert scene: critics, composers and public alike now recognising it as a monumental condemnation of totalitarianism in all of its guises.