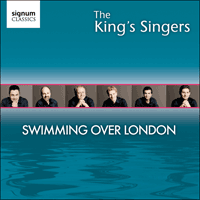 Swimming Over London is a new studio-album of jazz-inspired hits and recent commissions performed by The King’s Singers, and is a follow up to their Grammy Award-winning crossover album Simple Gifts.

A special King’s Singers arrangement of Mika’s By the time is also featured, inspired by their performance with him for the 2009 Mencap Little Noise sessions at the Union Chapel.

It has been a great pleasure for us to create this album of jazz-inspired songs. Included in the playlist are five brand-new, original songs, which we have commissioned for this disc.

Two come from the Finnish songwriter Mia Makaroff. A few years back we heard one of her songs, Butterfly, performed by the Finnish group Rajaton, and when we were planning the playlist her name came to mind. Later on down the line she said she had two ideas, and was struggling to decide between them, hence the two songs. We also asked Ysaye M. Barnwell, one of the singers in the internationally acclaimed a cappella ensemble Sweet Honey in the Rock, and she provided us with a wonderful Caribbean-influenced track.

The album’s title track, Swimming over London, was created by former King’s Singer, Bob Chilcott, a well-renowned choral composer, who was in former times a prolific arranger and occasional songwriter. Our last original song comes from the New York-based composer, arranger and producer, Roger Treece. “In addition to arranging and composing for ensembles from the Manhattan Transfer to the Danish Radio Symphony, Roger has collaborated closely with Bobby McFerrin since 2002, both as a member of Voicestra and as a co-composer and producer of the recently released choral album VOCAbuLarieS. For this album, in addition to his new song Keeper of the Seasons, he has arranged two contrasting songs; Sarah McLachlan’s beautiful Angel and Pat Metheny’s September 15th.

In amongst all these new songs are some King’s Singers favourites, including Recipe for Love and It’s a new world, along with newly arranged versions of Straighten up and fly right and Home by Alexander L’Estrange, and, from within the group, new arrangements by Philip and Christopher. We hope you will enjoy listening to this disc as much as we enjoyed making it.