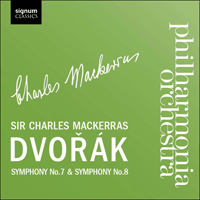 'If you like Dvorak’s famous Symphony No 9 (‘From the New World’), we think you’ll enjoy getting to know Nos 7 and 8 on this CD. The first of Dvorak’s symphonies to exhibit such expressivity and sometimes called the ‘Tragic’ Symphony, No 7 is a hidden gem. No 8 shows lots of folk influences—perhaps Dvorak’s ‘Pastoral’ symphony. Sir Charles Mackerras conducts these performances, recorded live at the Royal Festival Hall to capture the immediacy that studio performances so often lack' (Classic FM)

As regards the new compositions, I should like … to recommend the big dramatic overture ‘The Hussite’ and the Scherzo capriccioso, both for large orchestra. I presented both works last year at St. James's Hall and the Crystal Palace in London and now I am writing for the Philharmonic Society in London a new symphony which I must conduct myself on April 22nd of this year.

Dvořák’s letter to the great conductor, Hans Richter was written in March 1885 as he was putting the finishing touches to perhaps his finest, if not his most famous, symphony—No 7 in D minor, Op 70. The first of Dvořák’s nine visits to England had taken place exactly one year previously and he had been tremendously excited by the reception of his Sixth Symphony, among other works. Already known in Britain, thorough his Slavonic Dances and Slavonic Rhapsodies which had been performed there in 1879 and 1880, he was thrilled by his treatment as the lion of the 1884 season, beguiled by details such as the press apparently casting the ‘ř’ and ‘á’ to correctly print his name, and he was completely bowled-over by London itself:

I only wish you could see for yourself this city, its bustle and life it would simply take your breath away. All attempts at description are vain; anyone who has not seen and heard it would not believe it. Imagine this huge area a mass of houses and streets with a network of railways and you have some small idea what London is like. Or: imagine the New Town Theatre about five times as big and you will know what the Albert Hall is like where 10,000 people listened to [Dvořák’s] Stabat Mater and 1050 musicians and singers played and sang—and then the enormous organ. Imagine then the most wonderful co-ordination of the whole ensemble and you will be able to imagine the impression …

This mutual love affair was consummated when, after returning home in June 1884, he was elected as an honorary member of the Philharmonic Society and commissioned by it to write a symphony. Dvořák was in no small way impressed by this honour (commissions from the society had resulted in Beethoven’s Ninth Symphony and Mendelssohn’s Fourth earlier in the century) and in December that year he set to work on his Seventh Symphony. By the end of the month he could write to a friend, ‘wherever I go I think of nothing but my [symphony], which must be capable of stirring the world, and may God grant that it will!’ At the beginning of 1884, Dvořák had travelled especially to Berlin to hear an early performance of Brahms’s Third Symphony and it had made a deep impression on him. Brahms had also cajoled the younger composer somewhat about writing a better symphony than his previous effort and Dvořák was keen to prove himself. This was not quite the normal rivalry between composers, since Brahms had been instrumental in lending Dvořák not only encouragement and support, but also, after hearing his 10 Moravian Duets in 1877, personally recommended Dvořák to his own publisher, Simrock. Their relationship was one of mutual respect, though it is clear that Dvořák was in awe of Brahms, even submitting the proofs of many a work to the German. Having already scored a great critical and financial success with Brahms’s own Hungarian Dances, Simrock was keen to repeat the experience, and did so by publishing Dvořák’s Slavonic Dances and achieving an extraordinary over-night sensation.

Dvořák was keen not to let Brahms down, and admitted as much to Simrock in a letter of February, 1885. A month later, the symphony was complete and a further month on he was conducting the first performance of the work on 22 April at St James’s Hall, London. Writing to his friend Antonin Rus of the occasion, Dvořák enthused, ‘This time, too, the English again welcomed me as heartily and as demonstratively as always heretofore. The Symphony was immensely successful and at the next performance will be a still greater success’. Despite having being written in a matter of three months, the symphony displays a formal mastery which is matched only by an emotional intensity, infusing what might be called the ‘international’ idiom of the day with tightly controlled and developed Slavonic musical elements and colourings which are tinged more with storm and melancholy than with joy.

Just as Dvořák’s Seventh Symphony has been sometimes dubbed the ‘Tragic’, so his Eighth might well bear the monikers ‘Poetic’ or ‘Pastoral’ such is its easeful nature in comparison to its predecessor. It was composed even quicker than the Seventh, in about 10 weeks from the end of August 1899, at his brother-in-law Count Dr Václav Kounic’s estate at Vysoká u Příbram, in Central Bohemia. Dvořák’s successes in England and elsewhere had afforded him the means to purchase a plot of land from his brother-in-law and build a country home in which to escape publishers, performers and city life in general. The full score of the symphony, completed on 8 November, bears the inscription, ‘For being admitted to membership of the Emperor Franz Josef’s Czech Academy of Science, Literature and the Arts’—an honour bestowed upon him in April 1890.

Recent years had seen his fame rise and his fortune accrue and he was now as famous as any composer still alive and at work. So it came as quite a shock when Simrock offered him a mere 1,000 Marks for publication. Dvořák had previously regarded the 3,000 Marks initially offered by Simrock for his Seventh Symphony as derisory (particularly after it’s great London success) and this new offer forced his hand and he instead granted the first publishing rights to the London house of Novello. A couple of months after the symphony’s premiere in Prague on 2 January 1890, he was again making his way to England to conduct the work for the Philharmonic Society. He would reprise the work at Cambridge University the following year, on 15 June, together with his Stabat Mater, as proof of his academic suitability to be conferred an honorary Doctor of Music the following day. Despite finding the amount of music enough to give him indigestion and the Latin, which dominated the academic proceedings, impenetrable, he remembered the ensuing glory as ‘quite frightening’. Dvořák’s extended stay in the United States a couple of years later brought an even greater triumph to the work when it was performed at the World’s Columbian Exposition in Chicago, on ‘Czech Day’ by an augmented orchestra of 114 to an audience of around 8,000.

Back in Central Europe, the symphony was criticized by the powerful Viennese critic Eduard Hanslick as fragmentary and even by Brahms as somewhat lacking in substance. And while the work does not conform to the symphonic norms of the time, it rather takes its cue from Schumann in experimenting with sonata form and is successful in creating a whole from a rhapsodic treatment of linked melodic motifs, most notably in the opening movement. As a whole, the atmosphere speaks of Dvořák’s Bohemian countryside: bird calls, pastoral calm, happily plodding bass lines, elegant waltzes, stamping country dances, fanfares, hints of chorales or funeral marches and radiant or rip-roaring joy. This is a symphony marking Dvořáks first venture proper into the profusion of ideas and effects that, after the Ninth Symphony, transported him to the new world of the symphonic poem.