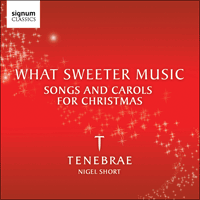 Songs and carols for Christmas

Tenebrae is a professional chamber choir, founded and directed by Nigel Short in 2001. Often performing by candlelight, the choir creates an atmosphere of spiritual and musical reflection, where medieval chant and renaissance works are interspersed with contemporary compositions. The carefully selected team of singers use the acoustic and atmostphere of the building to enable the audience to experience the power and intimacy of the human voice.

Tenebrae has an exceptionally wide repertoire from early, through renaissance, baroque and classical music, to romantic and twentieth century works, plus a range of specially commissioned pieces, the most recent of which is Joby Talbot’s Path of Miracles. 'What Sweeter Music' is a real festive treat, with a sumptuous collection of songs and carols for Christmas—touching on traditional favourites (Silent Night, Away in a Manger), modern classics (The Lamb, What Sweeter Music) and some new light-hearted arrangements (Jingle Bells, We Wish You a Merry Christmas).

'Choirs such as Nigel Short’s Tenebrae and Jeffrey Skidmore’s Ex Cathedra steer away from the traditional path. Having said that, though Tenebrae open with 'Jingle Bells'—albeit in a Swingle-ish arrangement designed to discourage audience clapping—before exploring mainly the modern-accessible axis of seasonal music by Rutter, Tavener et al, and arrangements of older numbers. Fabulously sung, and closing with a 'Twelve Days of Christmas' complete with sound effects that cannot fail to provoke a giggle. Superbly sung and plenty of fun' (Gramophone)
'The first of many new releases for the Christmas season—and what a fine album this is. Nigel Short directs the choir Tenebrae in soulful performances of well-known carols, alongside some that may be new discoveries for you. Be prepared to feel thoroughly festive' (Classic FM Magazine)

An interview with Nigel Short

Christmas and choirs have always gone together. Whether it be the Festival of Nine Lessons and Carols from King’s College, Cambridge, or an annual visit to midnight mass, our memories of Christmas are almost always accompanied by a soundtrack of carols and choirs. But what makes a good Christmas recording? What elements need to be there to bring something new to the market? How do you go about doing something different with the repertoire? These are some of the questions I put to Nigel Short, the musical director of Tenebrae.

Mark Chambers: So Nigel, why did you feel the need to record another Christmas CD?

Nigel Short: Well, from the very beginning Christmas and Tenebrae go together. It was where the choir began back in the Summer of 2001 recording The Dream of Herod, a disc of Christmas music, which was followed by a Christmas tour to Switzerland. It was a voyage of discovery for everyone involved, especially me, and it gave us all a chance to focus on our ensemble skills and building a choir sound. What happened on that first tour took us all by surprise; the opportunity to socialise and make music together really gave momentum to the group. And to this day it has been almost a group philosophy; work hard, play hard.

Mark Chambers: How did you go about choosing the pieces from the repertoire?

Nigel Short: Well, in my mind a Christmas CD needs to appeal to as many people as possible, so a wider range of pieces gives that opportunity. The repertoire for this CD falls into three categories; traditional carol arrangements, original pieces composed for Christmas and then some lighter close-harmony arrangements of Christmas favourites—a throw back if you like to my days as a member of The King’s Singers who did lots of this kind of repertoire and which I always found to be great fun.

In the traditional section we have I wonder as I wander, a beautiful Appalachian folk tune arranged by Andrew Carter, Gaudete by Karl Jenkins, Quelle est cette odeur agreeable? and Tomorrow shall be my dancing day, both arranged by Sir David Willcocks, Silent Night arranged by Jonathan Rathbone and Quem pastores laudavere and Away in a manger in new arrangements by myself.

Then we move on to the original compositions with John Tavener’s The Lamb, Alleluia by Peter Wishart, a trio of beautiful pieces by John Rutter (What sweeter music, There is a flower and the Nativity Carol), a gem from the English composer Herbert Howells with A spotless rose, an exciting new piece by the record’s producer Adrian Peacock (Veni, veni) and a ravishing setting of the Thomas Hardy poem The Oxen by Jonathan Rathbone.

The lighter repertoire, and fun, starts with a wonderfully energetic and tricky arrangement of Jingle Bells by Ben Parry followed by my own arrangement of We wish you a merry Christmas. Ben told me a little behind the circumstances of writing his piece:

“The arrangement of Jingle Bells with the odd 7/8 bar thrown in was written to put audiences in America and Japan off clapping through it. But it didn’t seem to deter them—they invariably persevered, and ended up either clapping on or off the beat depending on where the singers were in the bar. It was, of course, originally written for 8 solo voices, but sounds much more exciting with a larger group”.

It was great fun to do, and look out for the farmyard in Andrew Carter’s witty arrangement of The twelve days of Christmas!

Mark Chambers: So I see there are quite a few arrangements by yourself, did you write especially for the disc?

Nigel Short: No, I was actually contacted a few years ago by Boosey and Hawkes to compile a collection of new arrangements of Christmas tunes that were specifically light and jazzy, hence the title of the collection “Christmas in Blue”. It was great to have an opportunity to put them onto disc.

Mark Chambers: Was there a different approach to the Close Harmony style of piece?

Nigel Short: We always bring the same principles to bear in terms of quality of work and accuracy of course, but really it was about having fun singing together; some of the pieces on the disc are technically challenging but you have to get over that hurdle and ensure the music has a “smile on its face” that hopefully the listener will hear and respond to.

The sessions for this recording followed directly on from four days of very intense work recording a disc of Poulenc’s Mass and the stunning Figure humaine (released on Signum in 2010), but it shows the flexibility of the singers involved with Tenebrae that they can go from one extreme to the other in the blink of an eye; able to work on some of the most challenging choral music one day and imitating geese and cows the next!

Mark Chambers: How did you go about creating a sound for this disc? Was it different to say, the Poulenc?

Nigel Short: After discussion with the producer and engineer we decided to go for a light, warmer sound; bringing the microphones in closer, which of course created its own problems in terms of putting the singers under a microscope. When it’s like this they can get away with very little.

Mark Chambers: And why did you choose St Bartholomew The Great as a venue?

Nigel Short: I think St Bartholomew’s is one of the most stunning churches in England, let alone London. It was where Tenebrae recorded The Dream of Herod back in the 2001, and it was also the place where we performed a very emotional world premiere of Joby Talbot’s The Path of Miracles. Originally the premiere was to take place on 7 July 2005, the day of the London bombings, and so had to be postponed. When we did eventually perform the piece it was dedicated to the victims and was a very emotionally charged occasion. It is also a happy coincidence that I was recently appointed director of music here, so as a building it seems as close to our home as anywhere.

Mark Chambers: What is next for Tenebrae?

Nigel Short: Well, we will tour to the USA performing the Poulenc works and Talbot’s Path of Miracles and then we take another Christmas Swiss tour, which we are all looking forward to. Let’s just hope the Swiss like our animal impressions!