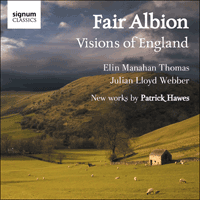 In recent years, Patrick Hawes has emerged as one of the country’s most popular and inspirational composers. Born in Lincolnhire, he studied music as an organ scholar at Durham University, and soon went on to make an impact in the world of choral music. April 2009 saw the release of Patrick’s latest album Song of Songs which was made an album of the week on Classic FM.

'Patrick Hawes has carved out a niche as a contemporary composer who writes melodic, atmospheric and, frankly, beautiful music' (Gramophone)

'Hawes’s admirers will find much here to confirm their warm response to his music’s quiet strength and individuality. A minor problem is the collection of so many short items which, heard through on a single album, can’t help sounding more similar than they are. Among the best are The Call—a setting of George Herbert for soprano and string quartet, cannily conjuring the sound of an Elizabethan viol consort—and the atmospheric After the Rain for string quartet and piano. The excellent performances feature the tawny loveliness of Julian Lloyd Webber’s cello-playing, plus two fine solo singers' (Classic FM Magazine)

The inspiration for my music stems from three essential areas—my Creator, my loved ones, and my country. Being English opens the door to a wonderfully rich heritage, a fascinating history, beautiful architecture and stunning landscapes and seascapes. Furthermore, I am instilled with a sense of pride and patriotism which resonates from our forefathers and their efforts to defend our island and the precepts which have made it ‘great’. It is difficult to analyse those features which have given rise to Englishness in the styles of our great composers—Purcell, Walton, Elgar and Vaughan Williams for instance. It certainly has something to do with a sense of majesty and a striving for things spiritual and noble. Our open and honest countryside provides a pastoral inspiration and, just as important, our parish churches stand tall and proud in every village in the land. They have been and still long to be the life-blood of our communities and are perhaps underestimated in the influence they have worked on the English spirit.

The pieces on this album are all visions of England in that they either aim to portray a certain building or scene, or else they speak of a more general reverence for the country and its heritage. I have chosen words from some of our great poets who captured, in their individual ways, important cameos of the England in which they lived. George Herbert spent most of his life as the rector of a small parish church near Salisbury and wrote poetry which aches with Christian desire. The call is a petition for the Way, the Truth and the Life to permeate his and our lives. I believe this poem must reflect the sentiments of countless parish priests who have served their communities in the Anglican Church and speak of those eternal virtues which have motivated English people in challenging times. Reflexionem was originally a choral work, the Latin words of which translate as ‘truth reflects beauty; beauty reflects truth’. In its instrumental form the piece serves as a meditation on Herbert’s words. The gentleness and simplicity of the text seem perfectly mirrored in the soft timbre of the harp and the high cello writing. Continuing the parish church theme, Ascension was written in celebration of Ascension Day and was born out of the image of the flag of St. George flying high above churches across the land. It aims not only to express the joy of The Ascension but also a feeling of being directed skywards on a bright, sunlit day.

Fair Albion uses larger orchestral forces which provide the opportunity to convey a more panoramic pastoral scene. This piece was inspired by the undulating Wolds of Lincolnshire—the county in which I was born and lived until my early twenties. For me, it also evokes the peak district of Yorkshire and Derbyshire and the warmth of the people who live there. A birthday is one of my favourite Rossetti poems. The heart of the poet is likened to ‘a singing bird’ and ‘an apple tree whose boughs are bent with thickest fruit’. And so her love is reflected in the surrounding nature, and we are reminded of our native wildlife and flora and the way in which our natural habitats inevitably become part of the people we are. My move to the Norfolk Broads in 2005 certainly influenced my outlook and my music. The large, open skies, the uncluttered landscapes and the abundance of water have had an almost purifying effect and the Three Broadland Preludes unwittingly seem to reflect this. Ranworth is one of the most tranquil villages in the area and its Broad is a nature reserve, unavailable to holiday cruisers. This prelude was born after my first visit to the Broad on a hazy summer day in August 2007. Fenside is another quiet area next to the village of Catfield, near Barton Broad. With this piece, I contemplate the farmland stretching as far as the eye can see, the smell of coal fires in the village in the winter, and the tower of Catfield church silhouetted against a dreamy, deep-orange sunset. In the autumn of 2007, the Norfolk artist David Dane put on an exhibition of his work at the Broadland Wildlife Centre. For the occasion, he painted a picture entitled Remembrance; I wrote a piece with the same name, and performed the premiere at the exhibition on Remembrance Day. The painting’s theme is one of the old wherries which carried cargo along the waterways, and this is the image in my mind as the tall, majestic sails are made full by the sea air. The theme of remembrance is maintained with the Requiem aeternam from the Lazarus Requiem. The premiere of the complete Requiem took place at the Cadogan Hall in London in March 2007. It uses the traditional Requiem text in Latin interspersed with an account in English of the raising of Lazarus as described in St. John’s Gospel. This movement comes near the beginning of the work and is included on this album as a humble memorial to all those who have given, and continue to give, their lives for their country.

Gloriette is the name of the building in which this cello and piano piece was first performed at Leeds Castle in August 2008. There can be few more beautiful buildings in the country. Dating from the thirteenth century, it was home to many of the Medieval Queens of England and was transformed into a royal palace by Henry VIII for Catherine of Aragon. The nostalgic opening melody is the prelude to moments of turbulence and drama as well as passages of real tenderness. How Hill marks a return to Norfolk where the white windmill and sweeping lawns make this one of the most picturesque spots on the Broads. Claire Jones performed the premiere in the grounds of How Hill at a reception in July 2009. Cantate Domino makes use of the original plainsong for Psalm 96. The lines of the Gregorian chant and the haunting sound of the baritone saxophone and organ create an atmosphere of England’s distant monastic past. Writing this, I kept in mind the images of great religious foundations destroyed during the Reformation, particularly Fountains and Rievaulx Abbeys.

The two pieces that follow are a reflection on rain and frost respectively. I wrote After the rain on a cool spring day while I lived in a boathouse on the River Thames in Berkshire. I was struck first by the pure rain falling on the murky water, and then by the sweet smell and freshness of the air once the rain had stopped. All seemed well with the world, as if things had been renewed. After leaving university, I taught English for a while, and it was a particular joy to bring Hardy’s novels alive to my students. His descriptions of rural life are second to none, and I am sure that reading aloud long passages of his prose is one of the things which awakened the creative spirit within me. The darkling thrush is a beautiful poem, full of wonderful imagery describing the coldest of winters. Winter is my favourite season; and these words conjure up all that is stark and beautiful about a frost-hardened landscape. The thrush warms the poet’s heart and seems to sing of a Hope beyond his knowing.

Quanta qualia appeared in its choral format on my debut album Blue in Blue. Here, I have provided a purely orchestral version which retains the sentiments of the words but allows the different timbres of the wind and brass instruments (and the violin solo) to take centre stage. The original Latin words speak of a longing for ‘the moment of meeting’. Without the words, here is a piece which, for me, speaks of my love for my country and my prayer that it will remain strong and safe for generations to come—reflective of ‘all that mighty heart’ of which Wordsworth spoke.