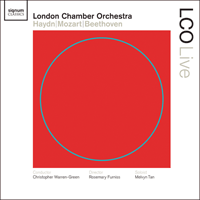 The London Chamber Orchestra, the UK’s oldest chamber orchestra, has nurtured the new and paid homage to the traditional since 1921.

Since 1988 Principal Conductor and Music Director Christopher Warren-Green has brought together the inspirational musicians and repertoire for which LCO is renowned.

The remarkable acoustic and intimate ambience of St. John’s, Smith Square, its London home, enable the LCO—the only chamber orchestra resident in London—to give vibrant performances and establish a close rapport with its audiences. The recordings on the LCO Live label, in partnership with Signum Classics, are the result of this happy marriage of orchestra and venue.

'The concerts of Warren-Green and the London Chamber Orchestra at St John’s, Smith Square aren’t often noticed in the press, but their large regular audience knows that they are some of the most exciting in London. Their Beethoven Ninth in June was one of the best I have ever heard. The Eighth, recorded at a concert last year, is given a performance of ferocious energy appropriate to such a physical work (with two of Beethoven’s very rare triple fortes)—a first-violin slip in the allegretto is quickly put right—but also has wit and exemplary clarity. Haydn 85, directed by Rosemary Furniss, is incisive and warmly expressive, but Melvyn Tan’s approach to the Mozart concerto, despite fine moments, seems to me rather edgy and overdramatic' (The Times)
'No information is given as to whether the London Chamber Orchestra uses period instruments or modern ones, but the style of these performance, however arrived at, is near-ideal, with lean but not undernourished string sound and crisp timpani. Tan’s engaging way with Mozart’s Concerto No 12 intersects nicely with the orchestra’s freshly minted accompaniment. Rosemary Furniss’s direction of Haydn’s ‘La Reine’ Symphony captures the music’s grandeur as well as its grace. And the subversive originality and rhythmic drive of Beethoven’s wackiest symphony come roaring happily across' (Classic FM Magazine)

Haydn Symphony No 85 in B flat 'La Reine de France'
By 1785, Haydn had plied his trade for 25 years in remote parts of the Austrian Empire for Prince Esterházy. But this had its advantages. ‘I was set apart from the world, there was nobody in my vicinity to confuse and annoy me in my course, and so I had to become original.’ He had been able to push the limits of the symphony in his ‘Sturm und Drang’ (storm and stress) influenced period. His music was, however, well known abroad. Indeed, pirated editions from Paris found their way to Vienna. In 1785, Mozart dedicated his latest quartets to Haydn and Haydn was getting to know Mozart as they both entered musical life in Vienna.

The Paris Symphonies were commissioned by a group of freemasons from the Loge Olympique through their member the comte d’Ogny. The orchestra was huge by Haydn’s standards. The 40 violins and eight double basses alone were double the size of his Esterházy orchestra. All the performers were masons and included some professional musicians. They played in a sky blue uniform and with their swords at their sides!

Haydn, who had corrected an earlier symphony (No 41) with the note ‘This was for far too learned ears’, adapted his music for a Parisian audience. The sonorous Adagio introduction ‘smacks of the old French Overture’. The stormy string passages of the Vivace section are almost soothed bythe oboe.

Haydn (unlike Mozart) hardly ever entitles a movement ‘Romance’. But here he uses a French romantic folk song, La gentille et jeune Lisette, as the tune for this movement. In the first edition of the symphony, the lovely flute solo has the annotation ‘Mot de gue’ beside it. Could this mean ‘as a yodel’ or did the audience break into applause at this point?

The last movement is a sonata rondo with enough subtle ingenuity to satisfy at every level. Wagner said of one of the Paris Symphonies that it was amongst the most beautiful things ever written. That could be true of this movement.

And did Marie-Antoinette really lend her name to this symphony? Yes, we know that she had a genuine affection for it. It is recorded that the harpsichord in her prison had on it a scrap of paper—Haydn Symphony No 85. ‘Times have changed,’ she remarked and her listeners burst into tears.

Haydn’s last French connection was just before his death. Napoleon’s troops captured Vienna on 13 May 1809. The Emperor ordered that a guard of honour should stand outside the house in the suburb of Gumpendorf as he lay dying. A strange connection—the doomed Marie-Antoinette thinking of Haydn: the dying Haydn reminded of Napoleon.

Mozart Piano Concerto No 12 in A K414
In June 1782 Mozart arrived in Vienna, having effectively been booted out of Salzburg by his employer, Archbishop Colloredo, who had grown tired of the Mozart family’s presumption and unwillingness to lay whatever talents they had at his service and no one else’s. Wolfgang was newly married to Constanze and as ever on the lookout for the musical trends that would, deftly employed, keep the two of them in the lifestyle to which they wished to become accustomed.

It was understandable, therefore, that he should return to the genre of the piano concerto, and he did so with three concertos, Nos 11—13, that form a calling card for his popularity as a composer, his skill as a performer and even his amenability as a teacher. No 12 was probably composed last and is the richest of the three. The outer movements breathe the same light, untroubled air as their later A major concerto counterpart, No 23— including the unexpected poetry of their slow movements, where time stands still, in the case of No 12 for a homage to Johann Christian Bach, whom he had met in London in 1764 and who had died at the beginning of 1782. The theme of this Andante is from one of Bach’s popular overture-cum-symphonies, but Mozart adds gravely expressive wind parts for a deeper, more somber effect. The entire concerto foreshadows without aspiring tothe boundless invention of the last eight or so piano concertos on which his fame largely rests.

As he wrote to his father in a famous letter of 28 December 1782, ‘These concertos lie midway between what is too difficult and too easy—they are very brilliant, and fall agreeably on the ear, though of course without becoming vapid. Here and there only connoisseurs may derive satisfaction, but in such a way that the non-connoisseur will also find pleasure, without knowing why.’ Is that not the condition of us all when we listen to Mozart?

Beethoven Symphony No 8 in F Op 93
Composed in 1811, the Eighth hangs on the coat-tails of the Seventh, at least in terms of chronology and in the estimation of many listeners who have preferred its weightier and more exuberant predecessor. One was foolish enough to ask Beethoven why he thought this was so. ‘Because it’s so much better,’ came the reply, which we can presume sent the impertinent interlocutor away with a fleain his ear.

Listening to the Seventh, there is not one superfluous note; and yet the Eighth strips away even more musical connective tissue; we are left with something bald, uncompromising and gleaming, a musical skull. Earlier commentators found it bubbling over with wit and high spirits; the conductor Michael Gielen is nearer the mark when he identifies the humour of the Eighth as ‘the humour of Rumpelstiltskin, full of wrath and suppressed violence, and without a hint of merriment.’ Although it stands at the end of the sequence of instrumental symphonies, and more than a decade before the epoch-making Ninththe tendency towards compression seems rather to leapfrog the Ninth and other grand statements, finding its truest home with the enigmatic ambivalence of the final piano sonata, Op 111, and string quartet, Op 135. Just as we arrive apparently in the thick of things—no grand introduction—so the first three movements do not so much finish as stop. There is no slow movement. The second movement ticks like one of Beethoven’s new metronomes that briefly tickled his fancy, with a couple of explosions along the way. Only the Minuet offers brief respite from the tension, but it dances with two left feet. Try marking the first beat of the bar, where the stress should be; much of the time, it is not. The absence of upper strings at the start of the Trio lends the horns’ theme an echoing, lonely quality which the ceaselessly searching bass line does nothing to dispel, especially when it rises to prominence and dies away with equally sudden unpredictability.

Beethoven has saved up all his endings for the overweening force of the finale—itself the longest symphonic finale that he had composed until then—which hammers home the key of F on 51 separate chords. Overkill? No, because of the twists and turns that the harmonic path has taken to get there. That jagged little shard of a theme asks its questions in any number of foreign places; sometimes it unlocks the door on a new key; at other times the door is slammed in its face.