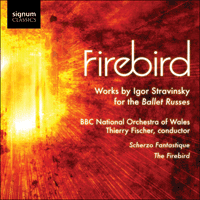 The Firebird & other works

The music commissioned by Sergei Diaghilev for his Ballet Russes has generated some of the most inventive and popular orchestral works of the twentieth Century. Led by Principal Conductor Thierry Fischer, this recording captures the excitement and vibrancy of the BBC National Orchestra of Wales in live performance—the first recording made in their new home of BBC Hoddinott Hall, Wales. This is the first release in a series of three with future repertoire including The Rite of Spring and Petrushka.

'This fresh sounding live recording from the BBC National Orchestra of Wales under Thierry Fischer, the first made in the BBC Hoddinott Hall in Cardiff, certainly has a sense of occasion about it, with the audience erupting as the finale chorale reaches its exultant conclusion' (BBC Music Magazine)

It was almost purely a series of accidents which catapulted Stravinsky to fame and recognition as one of the greatest composers of the twentieth century. That this was due to the prescience of the impresario Diaghilev, who gave him his first ‘break’ by commissioning the ballet The Firebird in 1910, is widely celebrated. Yet Diaghilev, for all his apparent masterminding of the renaissance not just of Russian ballet but of modern dance, would just five years earlier have been astonished to know that this was the art form with which he was to be indelibly associated.

It is true that one of Diaghilev’s earliest loves was music: when he came to St Petersburg in 1890 to study law, he skipped his lectures in order to attended classes in singing and composition at the St Petersburg Conservatory. His teachers there included Nikolay Rimsky-Korsakov (who 15 years later would start giving private lessons to Stravinsky) and Anatoly Liadov. However he was told by Rimsky-Korsakov that he had no talent as a composer, and Diaghilev soon immersed himself in the world of visual arts. Hence he originally came to Paris in the autumn of 1906 not to promote Russian ballet, but Russian art, presenting a successful exhibition of Russian paintings. Then in May 1907 he presented an all-star concert series of Russian music performed by such leading musicians as Rachmaninov (as pianist and conductor), the pianist Josef Hofmann, Rimsky-Korsakov and—making his first, sensational debut in Paris—the Russian bass Chaliapin. In the wake of that season’s success, Diaghilev had planned a series of sumptuous opera productions in Paris—five in all, all featuring Chaliapin—for the late spring of 1909. Then disaster struck: on 9 February 1909 the Grand Duke Vladimir Alexandrovich, uncle of Tsar Nicholas II and Diaghilev’s main sponsor, suddenly died. With the Imperial subsidy upon which the season had depended now withdrawn, Diaghilev had to cut his opera productions to one complete production of Rimsky-Korsakov’s Maid of Pskov (retitled Ivan the Terrible to draw his audience and to highlight the role played by Chaliapin), and reducing two others—Glinka’s Ruslan and Ludmila and Borodin’s Prince Igor—to single acts, the latter including the Polovtsian Dances. Those dances in particular proved the biggest hit of the season, and fortuitously confirmed Diaghilev’s new path: to present Russian ballet to the Parisians.

It was a development particularly welcomed by the art historian and theatrical designer Alexander Benois, in effect the godfather of Diaghilev’s enterprise. A close friend of Diaghilev’s since school days, Benois had long adored ballet, most particularly such works of Tchaikovsky’s as Sleeping Beauty, which for him presented a sumptuous feast for eye and ear free from the mundane world of the spoken word. Even before Diaghilev planned his first major ballet season, Benois had predicted a bright future for what many regarded as a moribund form: “the history of ballet is far from over,” he wrote in an article published in 1908; “before it lie even greater prospects, perhaps, than lie before opera or drama.”

It was Benois who, as early as 1908, first suggested that Diaghilev should produce a Russian nationalist ballet, an idea now all the more attractive given both the newly awakened French passion for Russian dance and also the ruinously expensive costs of staging opera. Benois even knew the subject should be the well-loved Russian mythical creature, the Firebird. Between Benois and the choreographer Mikhail Fokine, drawing from several books of Russian fairy tales, including the celebrated collection of Alexander Afanasiev (a source for several later Stravinsky works including The Soldier’s Tale), they concocted a story involving the Firebird and the evil magician Kashchey.

Diaghilev’s first port of call to find a composer for this ballet was not, as is often said, his old professor of harmony, Liadov, but Nikolay Tcherepnin who had conducted several of Diaghilev’s productions. Tcherepnin started composing the ballet, but withdrew for reasons which remain unclear (though the stress of working with his highly demanding collaborator, Fokine, may have been a contributing factor). The story that Liadov then subsequently accepted the commission, but failed to make adequate progress on the ballet (telling a concerned minion of Diaghilev’s months later that he had made progress and got so far as to purchase the necessary manuscript paper), appears to be no more than a rumour, probably spread by Diaghilev himself to save face after Liadov had turned him down. It is even possible, suggests the Stravinsky scholar Richard Taruskin, that Diaghilev was turned down by two other composers—namely Glazunov and another of his former Conservatory teachers, Sokolov—before he approached the then relatively inexperienced Stravinsky.

Diaghilev had first encountered Stravinsky’s work in January 1909, at the premiere of Scherzo fantastique. This brilliantly orchestrated work, the last Stravinsky composed under Rimsky-Korsakov’s supervision, was originally inspired by Maeterlinck’s Vie des abeilles (Life of Bees): hence the swarming effect of the outer sections of the work, at the heart of which is a more impassioned, late-Romantic style episode which—Taruskin has persuasively argued—represents the queen bee’s “Nuptial Flight”. “Persuasively argued” since Stravinsky eventually suppressed not only the programme, but also—in the face of a threatened lawsuit from Maeterlinck—denied that the work bore any relation to the Frenchman’s literary work. Nevertheless, Stravinsky’s almost unrivalled mastery of instrumentation is already evident in the Scherzo’s rich yet extraordinarily light-timbred orchestration, including three flutes, the second alternating with alto flute, the third alternating with second piccolo; cor anglais; three clarinets, the third alternating with a clarinet in B flat and in D; a contrabassoon; alto trumpet in F; celesta; and three harps. On the other hand there’s a total absence of heavy brass—either trombones, or tuba—so enabling gossamer textures throughout.

It was undoubtedly these orchestral skills which drew Diaghilev’s attention, and which prompted him to commission Stravinsky first to orchestrate two Chopin piano pieces for Les Sylphides (he commissioned Liadov to orchestrate one other piece for the same ballet) and then, on so slender a basis, to finally turn to Stravinsky to compose The Firebird.

Stravinsky may not have been Diaghilev’s first choice, but nonetheless as soon as the budding composer had become aware that a ballet on the Firebird was being mooted, he started composing at once in readiness for a commission should it come his way. That is not to say that Stravinsky, despite his claims later in life, dictated the form of the ballet; when he had his first meeting with Fokine he was made to revise his preliminary sketches extensively in order to fit with the scenario that Fokine was creating. What Stravinsky did bring to the ballet, though, was his extraordinary ear for orchestration, a profound inside knowledge of the “magic” harmonies of both Rimsky-Korsakov and also the great avant-garde Russian composer Scriabin; and above all, a sure sense of the theatre and of what would immediately tell on the stage, in no small part honed by his collaboration with the strong-willed Fokine.

The ballet tells of Prince Ivan who, seeing the brilliant Firebird, pursues her; but on capturing her he takes pity as she pleads for her freedom. She rewards him with one of her fiery feathers as a talisman. He then discovers in an orchard full of golden apples thirteen princesses, one of whom he falls in love with. Prince Ivan follows the princesses to the castle of the evil Kashchey, where he is captured by the sorcerer and his evil monsters. However Ivan summons the Firebird who lulls Kashchey and his court to sleep. She then leads the prince to a casket containing an egg which contains Kashchey’s soul. Ivan breaks the egg, so destroying Kashchey whose evil kingdom is replaced by a resplendent city, and freeing the princesses. The ballet ends with the wedding and coronation of Ivan and his beloved princess.

Stravinsky was responsible for the Firebird’s magnificent finale. Originally the ballet was to have ended with a series of divertissement, typical of many evening length ballets including Tchaikovsky’s Sleeping Beauty. However the strongly neo-nationalistic folk style of the Firebird threatened to tip such a divertissement into the kitsch world of the Grand divertissement which ends Cesare Pugni’s The Little Humpbacked Horse, a staple of the Russian Imperial Ballet much derided in Diaghilev’s circle. Stravinsky instead suggested something more stately, even liturgical, accompanied by a Russian khorovod (a kind of religious round dance): for this, he used a melody originally published by his teacher, Rimsky-Korsakov, and through repetition of this melody from a quiet horn solo, building to a resplendent brass climax, he effectively suggests the blossoming of the kingdom liberated from Kashchey’s rule.

The premiere, staged at the Théâtre Nationale de l’Opéra on 25 June 1910, conducted by Gabriel Pierné, was a sensation: Diaghilev had not only calculated well his French public’s taste for colourful Russian national style, but had also had this fulfilled perfectly by Stravinsky, as Benois recognized: “Music more poetic,” he wrote, “music more expressive of every moment and shading, music more beautiful-sounding and phantasmagoric could not be imagined.”