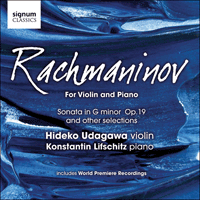 The music of Sergei Rachmaninov is imbued with a unique lyrical and harmonic style that has attracted a rich variety of transcriptions and arrangements. Transcribers J. Heifetz, F. Kreisler, V. Mikhailovsky and M. Press apply their own artistry to some of Rachmaninov’s great songs, etudes and romances, allowing performers and audiences alike to experience his music in new creative settings. Hideko Udagawa has performed extensively throughout the world and has captivated international audiences with her artistry and enthusiasm. On this album she is expertly accompanied by Konstantin Lifschitz.

'A pupil of Nathan Milstein, Hideko Udagawa retains the Master’s nobility throughout a programme of Rachmaninov transcriptions centered on Mikhailovsky’s skilful adaptation of the Cello Sonata' (BBC Music Magazine)

'Udagawa has a real feel for Rachmaninoff’s delicate expressive nuances … the recording balance is perfect, the violin never clouded by the density of the piano part, and the sound is brilliant and true' (The Strad)

‘My constant desire [is] to give tonal expression to my thoughts … I have no sympathy with the composer who produces works according to preconceived formulas or preconceived theories. Or with the composer who writes in a certain style because it is the fashion to do so. Great music has never been produced in that way … A composer’s music should express the country of his birth, his love affairs, his religion, the books which have influenced him, the pictures he loves. It should be the product of the sum total of a composer’s experiences. Study the masterpieces of every great composer, and you will find every aspect of the composer’s personality and background in his music. Time may change the technique of music, but it can never alter its mission … In my own compositions, no conscious effort has been made to be original, or Romantic, or Nationalistic, or anything else … I am a Russian composer, and the land of my birth has influenced my temperament, and outlook. My music is the product of my temperament, and so it is Russian music … What I try to do, when writing down my music, is to make it say simply and directly that which is in my heart when I am composing. If there is love there, or bitterness, or sadness, or religion, these moods become a part of my music, and it becomes either beautiful or bitter or sad or religious’ (David Ewen, ‘Music Should Speak from the Heart’, The Etude, December 1941).

Sonata in G minor Op 19 (summer 1901) transc Viktor Mikhailovsky (2005). Among High Romanticism’s crown jewels—dedicated to the cellist Anatoli Brandukov (1858/59-1930), best man (with Siloti) at the composer’s wedding in 1902, and Piatigorsky’s teacher—the G minor Sonata, a duo demanding of both players, with a concerto-like piano part, was the third masterwork of a year which saw also the completion of the Second Suite for two pianos and the C minor Concerto. Like those scores it symbolised for its composer a renewal of life, a regaining of confidence and creativity, following the failure and rejection of his First Symphony under Glazunov in 1897. Like them it traces a darkness-to- light, depression-to-hope, scenario—finale in the major, slow movement in E flat, C minor scherzo (Brahmsian 12/8) placed second. Like them it’s criss-crossed with shared thematic likenesses and pianistic figurations. In its original form it was premiered by Brandukov and the composer in Moscow, 2/15 December 1901. Later, far away in another world and climate, it climaxedthe last but one of the charity concerts closing Rachmaninov’s first American season, played by Casals, April 1919.

Romance in A minor, Op posth (?1888-89) ed Louis Persinger (1951). Several ‘romances’ are found among Rachmaninov’s chamber juvenilia.Noted in Bertensson and Leyda (1965), this one, published in New York over half a century ago from a Moscow manuscript, and subsequently in the USSR, takes the guise of a ternary andante cantabile with a con moto/cadenza episode and an elaborated reprise, the whole framed by a lento prelude and postlude, closing on a tierce de picardie. ‘Influenced by Tchaikovsky’ (Hideko Udagawa).

Danse Orientale, in A minor, Op 2 No 2 (1891-92) transc Mikhailovsky (2005). The second of two cello pieces inscribed to Brandukov—the sinewy melody and augmented seconds, the con moto action and rhythmic accents of the middle section, justifying the Borodinesque/Rimskyian ‘orientale’ of the title.

Daisies [Margaritki], Op 38 No 3 (1916) transc Fritz Kreisler (1926). Among the last and finest of Rachmaninov’s songs, dedicated to the Ukrainian (American naturalised) soprano Nina Koshetz (1891-1965)—a colourful lady who’d had an affair with Rachmaninov in her early twenties, upheld an extravagant lifestyle, ran a restaurant in Hollywood, leading to bankruptcy, and appeared in a sprinkling of minor films. In Chicago in 1921 she created the role of the witch Fata Morgana in Prokofiev’s Love of Three Oranges. Daisies sets a poem by Igor Severyanin (Igor Lotaryov, 1887-1941), an admirer of Oscar Wilde who captured ‘popular imagination and reached stardom with his slick pomaded hair parted in the middle; his melancholy, darkly circled eyes; his impeccable tails; and an ever-present lily in his hands’ (Anna Lawton, Herbert Eagle, Words in Revolution: Russian Futurist Manifestoes 1912-1928). Kreisler (1875-1962), ‘the best violinist’ of the age, and Rachmaninov were friends and collaborators, transcribing each other’s music, and famously recording Beethoven, Grieg and Schubert sonatas for RCA in 1928.

Étude-tableau in E flat major, Op 33 No 4 [7] (30 August 1911), transc Jascha Heifetz (1972). The two sets of Études-Tableaux Op 33 and 39 combine the art-study tradition of Chopin-Liszt-Liapunov-Scriabin with the narrative vision of Mussorgsky. To Respighi, Rachmaninov confided some programmatic ideas in 1930 but as a rule preferred to remain un-drawn. As John Culshaw commented in his study of the composer (London 1949), Rachmaninov was a man who ‘cared little for what we might call 'physical' programme music [in the Straussian understanding] … [but he] liked an external influence; he liked to be captivated or inspired by a picture or a poem, but the inspiration having been found he relegated the actual subject to the background and rarely revealed its identity’. The E flat, one of the composer’s own favourites (he recorded it in March 1940) is in the style of ‘a fiery march’ (HU).

Oriental Sketch, in B flat major (14/27 November 1917) transc Heifetz (1945). Together with the Piece in D minor and Fragments for piano (written the following day), this was the last music Rachmaninov wrote in Russia before leaving Petrograd for Scandinavia and then America (where he gave his first concerts in December 1918). He presented it in New York, 12 November 1931.

Vocalise, Op 34 No 14 (April 1912, rev 21 September 1915) transc Michael Press (1916). This wordless song, dedicated to the Ukrainian coloratura soprano Antonina Nezhdanova, has attracted a number of transcribers—Rachmaninov himself arranging it for violin, cello, voice/small orchestra, and winds, horns and strings (recording this last version with his favourite US orchestra, the Philadelphia, in April 1929).

Danse Hongroise, in D minor, Op 6 No 2 (September 1893) ed Samuel Dushkin. Rachmaninov dedicated his Morceaux de Salon Op 6 to his friend Julius Conus (who in 1928 was to publish an arrangement of the Vocalise for piano trio). Danse Hongroise, second of the pair, follows a typical scheme: Vivace-Un poco meno mosso-Meno mosso/Vivace-Un poco meno mosso. Especially associated with Stravinsky, Dushkin (1891-1976) was an American-naturalised Polish violinist who studied at the Paris Conservatoire, and with Auer and Kreisler. He made his New York debut under Damrosch in 1924.

I have always adored the music of Sergei Rachmaninov, and I rather envied pianists who have such a wide range of his music at their disposal.

This work I have always loved and found that the 3rd movement (Andante) sounded very well on violin. This discovery led me to ask Viktor Mikhailovsky to transcribe the entire Sonata for violin and piano.

I had sufficient material for a whole album of Rachmaninov and I have enjoyed immensely the making of this record.