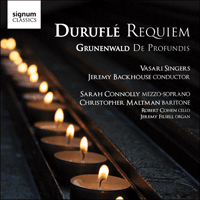 'Jeremy Filsell has clearly studied Duruflé’s orchestral versions and pulls out whatever stops necessary on the Tonbridge School organ to recreate the effect the composer was seeking. On the strength of such inspired organ accompaniment, this album immediately places itself head and shoulders above any other recording of this version and makes a compelling case for the validity of it as a concert rather that purely liturgical performing version' (Gramophone)
'This is a very distinguished record. The main work is Durufle's Requiem, in the version with organ accompaniment, which is extremely well played by Jeremy Filsell with Robert Cohen participating in the Pie jesu movement to moving effect. The singing, from this distinguished choir, is really fine, and the vocal soloists add their individual refinement most admirably. The main work is partnered with Durufle's Four Motets, music of equal quality and sung with admirable purity of style throughout. Jean-Jacques Grunenwald's far less well-known choral music clearly on this showing, demands a wider audience than it has received hitherto and the nature of these performances by the Vasari Singers, under the gifted Jeremy Backhouse, will surely go a long way to achieve that aim. The sound quality is first rate throughout and all-in-all this superb album is strongly recommended' (Musical Opinion)

The twentieth-century French composers Maurice Duruflé (1902-1986) and Jean-Jacques Grunenwald (1911-1982) were relatively close contemporaries as well as important figures on the musical scene of post-war Paris. Both composers trained and worked as organists through their entire careers and, while neither was particularly prolific in terms of their compositional output, more music remains from the pen of Grunenwald than that of Duruflé. Despite this fact Duruflé is far more revered, having composed one of the most enduring choral works of the twentieth-century in the form of his Requiem Op 9.

While there are some similarities between the outputs of Duruflé and Grunenwald—with works for organ and choir dominating—a considerable amount of film music composed by Grunenwald, mainly during the 1940s and 50s, notably separates the two composers. In addition—as well as being an organist, composer and pedagogue—Grunenwald was also known as an architect, having studied for a diploma in architecture at the École des Beaux-Arts in Paris concurrently with his studies in music at the Paris Conservatoire.

Born in Cran-Gevrier, a town near Annecy in the Rhône-Alpes region, Grunenwald studied with Ludovic Breitner, a pupil of Franz Liszt, from 1922. He moved to Paris in 1932 to study at the Conservatoire under Marcel Dupré for organ and Henri Büsser for composition and was to win premiers prix in composition and organ and a Second Prix de Rome. His first position as an organist came in 1935 at the American Church in Neuilly-sur-Seine and from 1936 to 1946 he was also assistant to Dupré at the church of St Sulpice. Over the space of some twenty years from 1943, Grunenwald was to compose music for twenty-three films, a period which proved to be the most productive of his composing career.

From 1955 to 1970 Grunenwald was organist at the church of St Pierre-de-Montrouge in the 14th Arrondissement, a post that he combined with teaching as a professor of organ at the Schola Cantorum from 1957 to 1961, and then from 1961 to 1966 at the Geneva Conservatoire. Following the death of Dupré, Grunenwald returned to St Sulpice in 1973 as titular organist where he remained until his death nine years later. Among his most notable achievements was a recording of the complete organ works of Bach between 1957 and 1962 on some twenty-four LPs.

Duruflé’s musical path was similar, and he began his career as a chorister at Rouen Cathedral from 1912 to 1918, where he also took lessons in piano, organ and music theory from the cathedral’s organist Jules Haelling, a pupil of Alexandre Guilmant. Duruflé moved to Paris in 1919 to study further and enrolled at the Paris Conservatoire in 1920, where he studied with Eugène Gigout for organ and Paul Dukas for composition. He was the assistant to Charles Tournemire at Sainte-Clotilde and then Louis Vierne at Notre-Dame—completing a truly venerable list of teachers and mentors. Duruflé was appointed organist at the church of St Etienne-du-Mont in 1930 where he remained until his death over fifty years later. Like Grunenwald, Duruflé was also a teacher and was professor of harmony at the Paris Conservatoire from 1943 until 1970.

The two main works of this recording, Requiem and Psaume CXXIX, are significantly different, but share the common subject of hope. The Requiem employs sections of the Latin ordinary text of the Mass for the Dead, which frequently talks of the hope of redemption, a heavenly paradise, and perpetual light. More commonly known today as Psalm 130, rather than 129—Grunenwald employed the Greek (or Septuagint) arrangement of the psalms rather than the more common Hebrew (or Masoretic) arrangement found in most modern translations—the first half of this penitential psalm is despairing and pleads for help and forgiveness, while the second half speaks of a confident hope.

Separated into three movements, Psaume CXXIX was written in 1961 for choir and orchestra, including organ, and presents the complete Latin text of the psalm. It is presented here as a version for choir and organ only, with the organ effectively adopting the various orchestral textures. The instrumental sections of this work are extensive and are vital in creating a dark atmosphere at the opening of the first movement (‘De Profundis’). The opening words of the text ‘Out of the deep have I called unto you O Lord’ are appropriately introduced by the basses, before a wordless section for full choir brings a quiet cry of despair vividly to life in a considerable and early climax. A softer section follows, in which the mood slowly begins to change as the psalmist states his plea further.

A sense of relief is felt as the second movement begins (‘Quia apud’) with a calm statement ‘For with thee there is merciful forgiveness’ in the upper voices. The tone becomes more confident as the resultant affirmation of ‘Let Israel hope in the Lord’ approaches, before the return of material from the opening movement lends an air of uncertainty once more. The text of this psalm is traditionally found in the Mass for the Dead, and Grunenwald appends the opening incantation of the Mass as the final movement (‘Requiem aeternam’). The sentiment is one of optimism once more, however, as gentle counterpoint works its way through the choir, before the sopranos are left alone to bring the work to a close with a clear vision of ecstasy.

Duruflé composed meticulously; he was self-critical and a perfectionist, and allowed only a few select works to make it to publication. As a result there are extremely strong elements of quality and consistency throughout his compact catalogue. Duruflé wrote three versions of his Requiem, the first of these was the version for full orchestra and organ completed in 1947. The second version was for organ only, while the third version for small orchestra and organ was completed in 1961. Commissioned by his publisher, Durand, the Requiem is clearly modelled on that of Gabriel Fauré, and follows a similar pattern in avoiding those parts of the requiem text that focus on the terrible fear of the unknown following death. Like Fauré, Duruflé also chose to use a baritone soloist, while the ‘Pie Jesu’ is also a solo movement, although with mezzo-soprano rather than soprano. Gregorian chant was a vital influence and features heavily in Duruflé’s music, a trait epitomised by the Requiem, and he quotes heavily from the chant of the Mass for the Dead from the opening bars and throughout the work. The prevailing mood of the Requiem is set from the start of the first movement and Duruflé’s extensive use of the chant intends to follow closely the rhythms set out by the Benedictine monks of Solesmes within the restrictions of modern barring.

In the first of the nine movements, ‘Introit’, the chant is punctuated by cherubic upper voices, all above flowing organ figures. The chant is passed from lower to upper voices before being heard in the organ, building to a peak and falling away once more. Continuing directly from the ‘Introit’, Duruflé displays his faultless abilities at counterpoint in the ‘Kyrie’, which goes through a number of emotions as the text beseeches compassion. A sense of varied drama ensues in ‘Domine Jesu Christe’ as further fervent pleas to be delivered from horrors of death and to be led into life and paradise by St Michael. An insistent and uninterrupted flowing figure in the middle of the texture characterises the ‘Sanctus’, which builds towards an immense climax at the words ‘Hosanna in excelsis’, which rapidly dissipates in a return to the opening textures for the text of the ‘Benedictus’.

The fifth movement, ‘Pie Jesu’, is scored for mezzo-soprano solo with a part for solo cello, and is a heartfelt rendering of the text and chant that leaves an indelible impression. The ‘Agnus Dei’ is uncomplicated, uncluttered and at times even hypnotic, while ‘Lux aeterna’ is confirmatory and restful in outlook. The penultimate movement, ‘Libera me’ brings a more fervent and uneasy tone, which is exploited to the full by Duruflé, with substantial climaxes and the final appearance of the baritone. Duruflé’s vision and hope of eternal paradise is expressed in the closing ‘In Paradisum’ bringing the Requiem to a calm and peaceful end, with the luxurious harmony found in profusion throughout this work present until the final unresolved chord.

Tu es Petrus and the Quatre Motets show both composers to be accomplished at shorter forms. Grunenwald’s Tu es Petrus, written in 1965, is a grand setting of the text spoken by Jesus to his disciple Peter, and employs the fairly common French scoring of choir and two organs (the orgue de choeur and the grand orgue), although with both parts played here on one instrument. Composed in 1960, the Quatre Motets are a further example of Duruflé’s extensive use of Gregorian chant in his music, with each motet based on an individual chant. Each of the motets are contrasted forming an arch-like shape overall; the first motet ‘Ubi caritas et amor’ is rich and flowing, while ‘Tota pulchra es’ is for upper voices and is quick and delicate, ‘Tu es Petrus’ is a bold and succinct statement, while ‘Tantum ergo’ completes this set of four with a return to the contemplative, and a restful ‘Amen’.