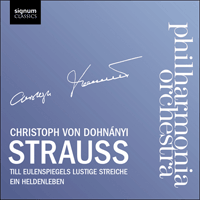 The Philharmonia Orchestra is widely recognized as the UK’s finest orchestra with an impressive recording legacy. Christoph von Dohnányi has been Principal Conductor for the past 11 years and has recently been made Honorary Conductor for Life.

Till Eulenspiegels lustige Streiche is considered to be one of Strauss’s most witty, entertaining and successful tone poems whereas Ein Heldenleben heralds the composer’s more mature period in this genre, and proved controversial at its premiere for its highly autobiographical nature.

'Like a photographer who works in black and white rather than colour, Dohnányi is a conductor whose interpretations bypass surface appeal and instead go straight to the music itself. The antics of medieval prankster 'Till Eulenspiegel' here scintillate throughout every section of the Philharmonia' (Classic FM)» More

‘If Strauss, give me Johann; if Richard, give me Wagner’ was an aphoristic put-down employed by many a lesser composer, critic or journalist in times past to position Richard Strauss firmly into an also-ran circle of composers. Strauss himself, never shy to blow his own trumpet, gave a gnomic analysis of his standing later in life, commenting at a Philharmonia Orchestra rehearsal in 1947, ‘No, I know what I want, and I know what I meant when I wrote this. After all, I may not be a first-rate composer, but I am a first-class, second-rate composer.’ This could be a light-hearted chiding of a recently formed ensemble rehearsing an unfamiliar work or a brutally honest assessment of his career by a composer in his ninth decade. With Richard Strauss, separating the man and his music is never an easy option.

By far the most significant influence on Strauss’s early career was his father, Franz. Strauss senior was a horn player of no little renown as well as a respected conductor. Thus, his talented son was granted rarefied access to orchestral rehearsals and hand-picked tutors. Franz Strauss reared Richard on the classics from Haydn to Mendelssohn, but despite playing in several Wagner premières and being consulted by the composer himself on Siegfried’s horn call, had no love for Wagner’s music and, perhaps surprisingly, was equally dismissive of Brahms’s output. It is little wonder, then, that two of the great loves and influences on Richard’s first independent compositions were indeed Brahms and Wagner.

By 1894, the 29 year-old Strauss had his first operatic disaster under his belt. Guntram, a Wagner-infused tale of love and redemption of sorts, was a project that was dear to Strauss and he, lifelong, held its critics in the utmost contempt and, at the same time, held the opera close to his heart, revising, in vain, some 46 years later. His ire even led him to ceremonially bury the opera in his garden, replete with tombstone inscribed, ‘Here rests the honourable and virtuous young man, Guntram—Minnensinger—who was horribly slain by the symphony orchestra of his own father. May he rest in peace.’ Whether Guntram, the composer’s father’s influence, or both were being psychologically rested in peace is a matter for conjecture, but Strauss, as tenacious as his father, was already developing a second operatic project based on the subject of the mediaeval, legendary rogue, Till Eulenspiegel. Still smarting from the utter rejection of Guntram, Strauss soon abandoned the idea, and for the meantime opera itself, and instead returned to the concert hall with one of his most witty, entertaining and successful tone poems, Till Eulenspiegels lustige Streiche, the title in full being Till Eulenspiegels lustige Streiche, nach alter Schelmenweise—in Rondeauform Op 28 (Till Eulenspiegel's merry pranks, in the manner of an old rogue—in Rondo form). Despite Strauss’s use of the antiquated term, Rondeau, the form of the work is not strictly that of a repeating rondo structure, the glue instead being in the variation and repetition of the two main themes. The first performance was conducted by Franz Wüllner in Cologne on 5 Nov 1895, Strauss having been detained in Munich by a prior engagement.

Till Eulenspiegel springs from Low German folklore, legend having it that he was born near the city of Braunschweig around the beginning of the Fourteenth Century. Travelling through Europe, Till is a prankster without peer or fear, playing the fool whilst exposing vice, corruption, greed and folly as he moves from city to city. Nobody is immune to his irrational impudence: craftsmen, merchants, clergy, nobility, the judiciary and even the pope are lampooned. Strauss sticks to the spirit of the many popular editions of our anti-hero’s misadventures by presenting Till’s picaresque tale as a series of episodes strung together a light touch. The work famously opens with the short, dreamy ‘Once upon a time’ phrase from the strings before our little tinker Till enters, represented by a sprightly horn. The theme is absorbed into the whole orchestra until Till’s second, more mischievous motif is sounded on the high clarinet and the devil is let loose in a dazzling, dizzying display of orchestral brilliance. Our loveable rogue rides roughshod through a marketplace, creating havoc; mocks the clergy whilst dressed as a priest; falls for a girl and rages as he is sent on his way; and finally cocks a snook at some po-faced academics. But the frolics are over as Till is captured and sent for trial. Sombre charges are delivered by the orchestra, with Till whimpering pitifully, before the doom-laden trombones deliver the verdict—death by hanging.

A funeral march takes him to the gallows where, his doom set, he yet tries to cajole and wheedle his way to freedom. Too late—a trilling flute announces his last breath as the deadly lever is pulled. In the enchanting epilogue we are gently reminded of the ‘Once upon a time’ theme before the irrepressibly irreverent spirit of Till returns for one final musical gag. Strauss had for some years been gradually abandoning the classical Viennese model of presenting themes, developing them and then restating them to create a satisfying whole and turning to a rather more free-form, momentary compositional style that moved closer to narrative story-telling on a scale that became both monumental and intricate. Years of honing his skills in this purely orchestral arena were spurred on by the influence of Berlioz and the so-called ‘music of the future’ of Liszt and Wagner. His understanding of instrumentation and orchestration deepened during these years and the formal constructions of his pieces became more fantastical and further removed from the classical ‘ideal’—though there is rarely an outright rejection of larger binding principles. The narrative aspect of these tone poems naturally feeds into Strauss’s later emergence as one of the Twentieth Century’s great opera composers.

Just how much Strauss was donning Till’s character and cocking his own snook at the critical naysayers and the philistine bourgeois he so greatly detested, most notably after the failure of Guntram is perhaps moot, but this was not to be the last time he might appear as a protagonist in his own compositions. The Symphonia Domestica Op 53, in particular, has the composer depicting the minutest details of his home life, wife and family. More controversially, Ein Heldenleben Op 40, first performed in Frankfurt am Main on March 3, contains long episodes depicting or reflecting upon the composer’s personal life. The tone poem received a barrage of criticism when it appeared, portraying Strauss as a monstrous egotist, a shameless self-promoter, portraying himself as the hero of the piece. Such critics may well have been also smarting at the outrageous caricature of their kind as being shrill, spiteful and complacent, in the second movement. The Nobel Prize-winning French dramatist, Romain Rolland quotes Strauss thus, ’I do not see why I should not compose a symphony about myself; I find myself quite as interesting as Napoleon or Alexander.’ Perhaps this is tongue-in-cheek or perhaps there is a hint of the serious in here, too. He further mentioned to Rolland that, ‘I am not a hero. I haven't got the necessary strength; I am not cut out for battle; I prefer to withdraw, to be quiet, to have peace.’ Strauss could be pompous, but he certainly also had a sense of humour; the truth may well lie somewhere between these two qualities. The work is cast in six sections and although he ultimately refrained from including explicit programs in his published work, numerous sources agree on the naming of the movements:

No formal information is forthcoming from the composer’s score, but, in the most general fashion, Ein Heldenleben might be thought of as an extended and expanded version of a symphonic first movement. Der Held 2 is all about our hero—a character study. He strides forth, horns and cellos soaring, the orchestra, thrusting and surging, yet noble and dignified. The ignoble critics are up for a bashing in Des Helden Widersacher 3 (beg). Caviling clarinets, squawking oboes, petty flutes and grumbling low brass make for a rather personal attack on Strauss’s perceived enemies. The hero rises above all of this clamour, eventually silencing their spiteful attacks. Des Helden Gefährtin 3 (end) & 4 is a portrait of Strauss’s wife, the singer Pauline de Ahna, represented by the solo violin in a series of long cadenzas. When challenged about some of the less than flattering sounding moments of the portrait Strauss commented, ‘It’s my wife I wanted to show. She is very complex, very feminine, a little perverse, a little coquettish … at every minute different from how she had been the moment before.’ Nonetheless, it is soon clear that the hero is smitten by her. The hero is soon bidden by offstage trumpets to leave his love-bed and prepare for battle. Des Helden Walstatt 5 opens with brutal, militaristic drums and a trumpet emerges as the harbinger of the fight to come. The battle scene is an extended development section where the hero repels attack after attack until his theme emerges triumphant. Des Helden Friedenswerke 6 enters peacefully via a pair of lugubrious tubas but soon broadens out into a calm reverie where the hero looks back on his good works. Strauss is considering his own achievements here by interweaving quotations from all of his previous tone poems (except Aus Italien) throughout the symphonic texture. Notable here is his generous use of material from his beloved Guntram. Des Helden Weltflucht und Vollendung 7 is effectively the coda to the piece, where previous works appear again in the counterpoint and battles past recalled with a return of the critics opening motif. The calming influence of the solo violin re-appears to sooth these nightmares and return the world to rights. A solemn last variant of the opening hero theme in the full brass builds a final fanfare to a life fulfilled.