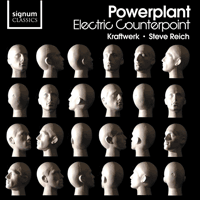 Powerplant encompasses the work of some of the most dynamic young British artists, bringing together the virtuoso percussionist Joby Burgess and live sound engineer Matthew Fairclough.

The repertoire includes a new take on Steve Reich's Electric Counterpoint, first commissioned in 1987 for guitarist Pat Metheny, placing the percussionist against a pre-recorded tape of himself. The pieces by Kraftwerk, widely acknowledged as the pioneers of modern dance music, also feature highly on this disc with arrangements for string quartet and a variety of percussive and electronic instruments.

Electric Counterpoint (Steve Reich)
Commissioned for guitar legend Pat Metheny in 1987, Electric Counterpoint is the third in a series of pieces including Vermont and New York Counterpoint, which places a soloist against a pre-recorded tape of themselves. Reich’s trademark hypnotic sound is evident throughout, and the three movements simply entitled ‘Fast-Slow-Fast’ dovetail into one another. The twisting lines are layered, often in canon with as many fifteen parts being heard simultaneously. I first heard Reich’s Drumming when I was fourteen and his music has been a big influence for me, The Orb’s Little Fluffy Clouds has been an influence in making this new version of a Reich favourite.

Experimenting with tape loops, synthesizers and vocoders they released two eponymous albums in 1971 and 1972, before making their international breakthrough with Autobahn in 1974. A string of concept albums followed: Radioactivity, Trans-Europe Express, The Man Machine and Computer World each exploring a new theme with precision artwork and instant hooks. Their influence has stretched far and wide, from New Order and The Human League to Arthur Baker and Afika Bambaataa.

Carbon Copy (Joby Burgess and Matthew Fairclough)
Originating in Africa, by way of Brazil, the berimbau is used for magic, combat and incantation. Using live sampling and computer processing this ancient instrument is cut, copied and re-mixed with scattered beats and urban overtones.

Temazcal (Javier Alvarez)
Temazcal, the Mexican word meaning ‘burning water’, combines a single pair of maracas with pre-recorded sounds. Improvising around rhythmic patterns taken from Latin American folk music, the maracas weave through a world of electronic noises and rhythmic shadows. In the words of composer John Adams, ‘The music of Javier Alvarez reveals influences of popular cultures that go beyond the borders of our own time and place.’

Audiotectonics III (Matthew Fairclough)
Audiotectonics III was written specifically for the xylosynth—a cross between a xylophone and a synthesizer—allowing quick access to a diverse range of sounds. Here percussion instruments from India, Africa, Europe and South America have been sampled and combined with electronically synthesized material.