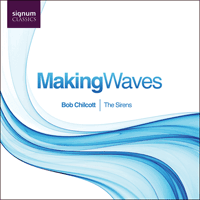 A new disc of works by the world renowned choral composer Bob Chilcott. Bob has been involved in choral music for most of his life and since he became a professional composer in 1997 he has had over 100 works published by Oxford University Press. He was hailed by Gramophone as 'one of the finest choral composers at work in Britain today'.

This album includes tracks with The Sirens, an ensemble of young professional women's voices specially created for this recording. Also featuring are a jazz trio with Alexander Hawkins on piano, Michael Chilcott on bass and Dereck Scurll on drums.

The works included here reflect the strong support and interest that Bob’s vocal music generates, with commissions from a wide variety of choral societies, children & youth choirs and professional choruses.

'Some welcome new repertoire for sopranos and altos here from a contemporary hero of British choral music, Bob Chilcott … the hugely talented Iain Farrington accompanies with characteristic taste and charm' (The Guardian)» More
'As a member of the King’s Singers and subsequently as a freelance composer, Chilcott has forged a convincing, unashamedly accessible synthesis of musical languages, drawing freely on jazz, folk and classical elements in his choral pieces' (Classic FM Magazine)» More

Ever since I have been working as a full-time composer I have written music for upper voices. One of my first commissions was from Jean Ashworth Bartle’s Toronto Children’s Chorus back in 1994, and it was soon after I fulfilled this commission that I found myself becoming more and more involved with upper voice choirs, both as a composer and a conductor. This gave me the opportunity to write songs, which I love to do. It also gave me the opportunity to work with many different young choirs from all over the world, who showed me very quickly how much joy could be had from working with people such as these who were open, energetic, funny, unprejudiced, honest, and ultimately always determined to do the very best work that they could. As a composer in this context I have always looked for texts that might inspire or motivate, and looked for melodic devices that might help both trained and untrained singers shape phrases in the most natural and musical way that they are able. I am at heart a melodist, and I unashamedly draw on many of the influences that have touched my musical life—from my time as a chorister in King’s College, Cambridge, my time working as an arranger and orchestrator for BBC Radio 2, and as a singer with The King’s Singers, with all the breadth of repertoire that they embrace. Nothing however has touched my musical life more than the legions of young choirs with whom I have worked over the past eleven years, who with their energy, their community, and their musical diversity have inspired me to look at the way I think about what music and singing gives and can give to us all.

I wrote Circles of Motion for the 'Sing a Mile High' Festival in Denver, Colorado. The text is by the living Native American poet, Joy Harjo, who reflects here on the inevitable circle of life. Like a Rainbow, written for the Mississauga Children’s Choir in Ontario uses a traditional Native American text that expresses how the colours of the rainbow show us unity. All things pass, written for the Midwest Children’s Choir Festival in Ames, Iowa, was first sung by a 400-strong choir with singers aged between eight and eighteen. The text, by Lau-Tzu from the sixth century BC suggests in a rather comforting way that we inevitably have very little control over our destiny.

Making Waves was commissioned by Susan Knight and the wonderful Newfoundland-based youth choir, Shallaway, to honour the centenary of Marconi’s first trans-oceanic wireless signal, sent from Poldhu, Cornwall to St John’s, Newfoundland. The piece was used on a CBC TV programme made in celebration of Marconi’s life, and was also to receive its first performance on CBC Radio. The piece, written for double choir was recorded simultaneously by Shallaway in Newfoundland, Canada, and by the Scunthorpe Cooperative Junior Choir and their conductor Sue Hollingworth in Scunthorpe, England. What was so special and unique about this was that both choirs were singing at the same time without hearing each other, while only the two conductors heard the choirs at the same time through headphones that were wired up through the telephone line. It was a brilliant idea that took two attempts over two subsequent weeks, because the first time it was tried through a mobile phone connection, and as there was so much delay it didn’t work. The second time, however, the CBC persuaded a kind lady who lived in the nearest house to the Scunthorpe church where the English choir was singing to let them put the feed through her phone line. It worked brilliantly, and we heard it for the first time on CBC Radio, with Susan Knight commentating from the CBC Studio in Newfoundland, and me from the CBC Studio in London.

The sixteenth-century text of The Lily and the Rose is full of multiple meaning, but perhaps the most compelling one suggests it is a song the Virgin Mary sings, grieving for her dying son. The piece was written for the 2002 Oklahoma Music Educators Association Children’s Chorus, conducted by Jean Ashworth Bartle. Another more well known hymn to the Virgin Mary from medieval time, So Fair and Bright was written for Charlotte Jackson’s elegant Amabile Girl’s Choir from Kendal in England and was written for them to sing together with Pamela Cook’s famed Cantamus Girl’s Choir. John Donne clearly had not had a good experience in love as is made clear in his poem Catch a falling star. This piece was written for Worldsong, a festival of children’s choirs hosted by Robyn Lana and the Cincinnati Children’s Chorus.

Swansongs (1 & 2) were written for a group of young singers from the state of Louisiana chosen to sing in the 1999 Elementary Honor Choir of the American Choral Directors Association. In 2007 I was asked to be the composer for the fund raising composer auction for Chorus America, the organisation that promotes and helps the work of professional choirs in the United States. Paul Caldwell, a composer and the conductor of the Youth Choral Theater of Chicago decided to try and secure the bid, and he formed a consortium of nineteen choirs from all over North America, plus one from Dunfermaline in Scotland that raised thirty thousand dollars for the organisation. I chose two poems, one by Christina Rossetti that celebrates a new found love, and I coupled this with ‘My love is like a red red rose’. All for love of one, uses an anonymous fifteenth-century text about betrayal in love and was written for a choir of children aged between eight and twelve that made up the North West Honour Choir of the Association of British Choral Directors for the 2007 Convention in Chester. This choir, of about fifty singers still continues to give concerts on a project basis.

This Day and A Little Jazz Mass are two of five pieces that I have written for the wonderful Crescent City Choral Festival in New Orleans, hosted by Cheryl Dupont and the New Orleans Children’s Chorus. This Day was written for the first festival that took place after Hurricane Katrina, and the texts reflect on the length of the day and of life and on the fragility of both. A Little Jazz Mass was first performed in 2004 by a choir of 400 young singers and jazz trio in St Louis Cathedral in New Orleans, and to my surprise this work has not only since been performed widely as a concert work, but also used liturgically in the service of Mass.