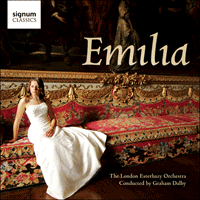 Emilia Dalby is one of the most promising new talents of her generation, and in her short career has already performed before illustrious figures such as Princess Anne and Archbishop Desmond Tutu. Aged 11 when this disc was recorded, Emilia is one of Signum Record’s youngest artists. Emilia made her debut singing Rule Britannia at The Sail for Gold Ball 2004 when she was just nine. Since then she has completed a full-time chorister post at Salisbury Cathedral, leaving in July 2008 with a music scholarship. During this period she has sung in Venice (San Marco), performing in many of the Great Cathedrals of Tuscany and a tour of Vienna and Salzburg.

The young soprano sings a selection of traditional folk tunes including The Last Rose of Summer and Steal Away, alongside Handel’s Laschia ch’io Pianga and IF by Michael Nyman, who proclaimed Emilia’s technique and sound as being “absolutely gorgeous”

Emilia opens her album in keeping with the cover picture, in rich baroque style with the great Anglo/German composer George Frideric Handel whose breathtakingly simple aria Laschia ch’io Pianga (let me weep over my cruel fate) is performed with strings and a two-manual George II harpsichord with authentic baroque decorations. Italian film composer Ennio Morricone’s ‘Gabriel’s Oboe’ from the film The Mission is set in the same baroque period and is sung as Nella Fantasia, orchestrated for strings and woodwind with Emilia’s high soaring soprano joined by Peter Whyman’s soprano saxophone.

The album continues with another piece from the cinema. I’ll walk with God was a huge Hollywood blockbuster by Nicholas Brodsky written for Mario Lanza in The Student Prince. This version is sung with great conviction against full orchestra that includes a piccolo trumpet feature.

From The Beggar’s Opera to ITV’s television series Sharpe, Over the hills and far away is a catchy four hundred year old folk tune seen through the eyes of young Lady Jane Grey with new lyrics by the conductor and given a sparkling, light-hearted arrangement by Ned Bennett.

The moving work If allows the listener the first chance to hear Michael Nyman’s haunting melody sung as the composer intended—by the reflections of an innocent child. Emilia sings the voice of the young Dutch diarist, Anne Frank, bewildered as to why the world about her is not a better place.

Opening as a distant rumble of warning, Emilia revisits her Viking roots (she holds a Finnish passport) with a veritable symphonic poem based around the call to arms from Sibelius’ Finlandia Hymn. ‘O Finland Se’ is sung in Jean Sibelius’ mother tongue of Swedish with rich fugal quotes from Sibelius’ 2nd Symphony in a daring arrangement by Colin Skinner.

No young soprano’s debut album would be complete without the lovely French masterpiece Panis angelicus by César Frank, re-scored for oboe and strings with the fine tenor voice of Andrew Busher singing in the duet section.

Emilia’s imagination next takes her back to the Age of Chivalry with chanting monks and strange medieval instruments playing the Agincourt Song as she sings her favourite school hymn When a knight won his spurs, and she hears the rousing words of Shakespeare’s “This Royal Throne of Kings…this England!” (read by the ex-BBC World Service presenter John Touhey) before the monks’ procession departs.

The Sarum Voices lament the long cold winter nights in Miri it is, a gutsy song from the time of Chaucer but Emilia invokes them to usher in the sunlight with Sumer is icumen in, a roundelay popular with children since the 13th century and one of the earliest songs on record. The unexpected arrival of a full modern string section combines the two in a complicated finale cleverly woven.

The last rose of summer is a wistful Irish parlour song from the 19th century and, despite its sad lyrics, has remained a popular favourite with singers and listeners alike.

Suo Gan, a beautilful Welsh lullaby, is performed in a new and original version with traditional harp but with a sweeping string counter-melody.

Emilia, The Sarum Voices and The Esterhazy Orchestra all come together to perform a wonderful version of the powerful and wistful spiritual Steal away in as an original arrangement as you are likely to hear with a final tubular bell sounding as a distant clocktower.

The album closes with the talents of two contemporary composers with two beautiful prayers specially composed. Ave Maria was written by Benjamin Lamb whilst organ scholar at Salisbury Cathedral. Ben is Emilia’s voice coach and director of Sarum Voices. Leo Forsdyke’s miniature gem God be in my head is scored for divisi strings and viola solo in the English Pastoral style of Vaughan Williams. The text is from the Sarum Prayerbook of 1545 and continues Emilia’s Salisbury influence.

My first album is full of magical musical memories for me—the earliest being When a knight won his spurs which I heard sung by the girls at my first school (The Study in Wimbledon), when I was just six, and it soon became my favourite song. My family visits to Finland in the summer meant that I heard Swedish spoken around me and once my Dad played the Finlandia Hymn on an old fiddle he found hanging on the wall to my Finland/Swedish Grandfather who welled with emotion.

I hope you enjoy the album as much as I enjoyed recording it.