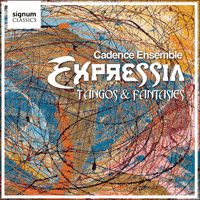 The new release from one of Armenia’s leading and most popular music groups. Following their prior success this year with their first release of Expressia—Armenian Fantasy, Cadence Ensemble expand their recording ventures to Expressia—Tangos and Fantasies.

This new release explores the tango at its best including works from some of the great Tango writers including Astor Piazzolla and fellow Armenian Narine Zarifian. With innovative arrangements of works by Carlos Gardel, Hector Stampioni and the Fantasy on Themes of Porgy and Bess by George Gershwin.

'Although Gershwin's music seems a little incongruous in the context of so many Tangos, the arrangement works well and is bound to be a crowd-pleaser' (MusicWeb International)» More
'Those who value tango as a specific kind of mood music rather than specifically for Piazzolla's groundbreaking stylistic fusions will find this an unusual addition to the corpus of recorded tango. The sound environment created at the venerable Abbey Road studios is well suited to the recording's aims' (AllMusic, USA)» More

Astor Piazzolla (1921-1992) was an Argentine tango composer and bandoneon player who revolutionised the traditional tango into a new style, incorporating elements from jazz and classical music, termed nuevo tango. He is widely considered the most important tango composer of the latter half of the 20th century. A formidable bandoneonist, Piazzolla continuously performed his own compositions with different ensembles. He is known in his native land as “El Gran Ástor” (The Great Astor).

Carlos Gardel (1887-1935) was perhaps the most prominent figure in the history of tango. He died in an airplane crash at the height of his career, creating the image of a tragic hero throughout Latin America. For many, Gardel embodies the soul of the tango style that sprang from the barrios of Buenos Aires and Montevideo at the end of the 19th century.

Born in 1958 in Yerevan, Armenia, Narine Zarifian graduated from Yerevan State Conservatory in 1984, where she now holds a professorship. A member of Armenia’s Union of Composers and the International Association of Female Composers, she has performed in Greece, the Czech Republic, Syria, Lebanon and Russia. Narine’s works include a ballet, a symphonic poem, a set of vocal works, string quintets, a set of symphonic and folk works for symphonic orchestra, folk and electronic instruments and a concerto for guitar.

The pianist, composer and arranger Hector Stampioni (1916-1997) is often described as a master of tango who embodied the fundamental values of this musical form from the 1940s to the present day. A brilliant orchestator, exquisite pianist and outstanding composer, Stampioni is one of the undisputed titans of the tango movement.

George Gershwin (1898-1937) wrote most of his vocal and theatrical works in collaboration with his elder brother, lyricist Ira Gershwin, composing for both Broadway and the classical concert hall. He also wrote popular songs and many of his compositions have been used on television and in numerous films. George Gershwin’s chief works include Rhapsody in blue, An American in Paris, Porgy and Bess and Second Rhapsody.